The Crepe House on Valencia Street to shutter: Coronavirus ‘the last nail in the coffin’ 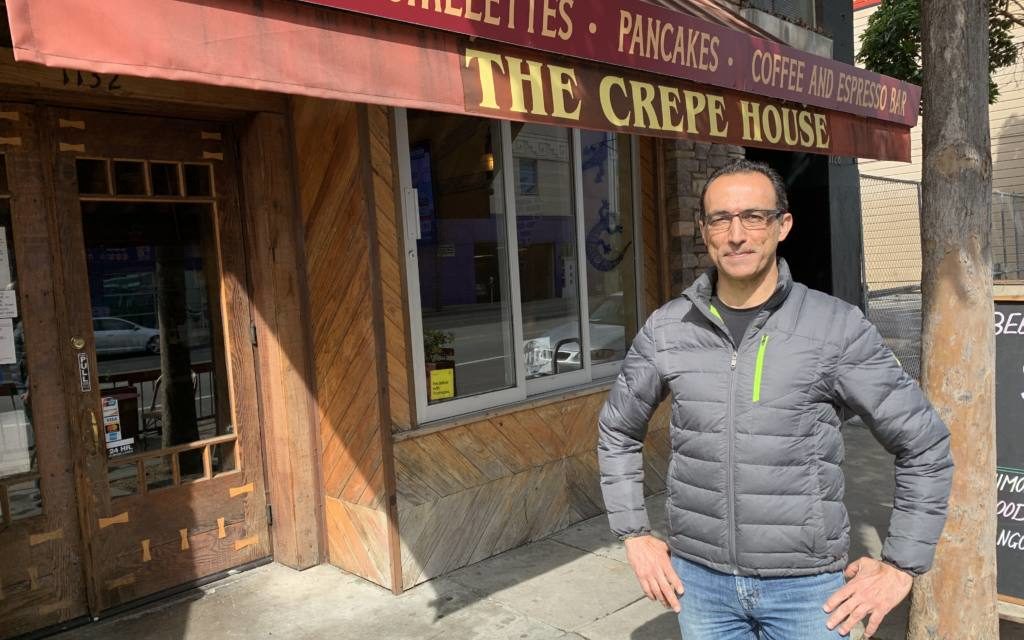 Shar Haddadin stands in front of The Crepe House on Valencia Street. Photo by Julian Mark

Not everything can be blamed on the coronavirus — but it was, indeed, “the last nail in the coffin” for The Crepe House on Valencia Street.

While many restaurants around the neighborhood have temporarily closed their doors, the crepe establishment that has operated on Valencia Street between 22nd and 23rd streets for some 10 years will close its doors for good at the end of the month.

The restaurant is currently doing deliveries, and taking it “day by day,” according to owner Shar Haddadin, who said that, since people began distancing themselves from public spaces, business has dropped some 70 percent.

But the pandemic is not the only reason for his decision.

Truth be told, said Haddadin, “2019 was a hard year for us.” He said business had dropped some 20 percent from 2018 — and numerous factors facing the business in 2020 appeared daunting.

For one, his building was sold to Mosser Capital in January, and the two parties agreed to a 35 percent rent increase. Haddadin said he was okay with a rent increase — but there were other factors to consider: The temporary Hummingbird homeless respite center would soon move in next door, and new protected bike lanes would likely be installed.

Plus, two separate five-story mixed-use buildings had been proposed on either side of the restaurant — one on the former Lucca Ravioli Co. parking lot and the other to replace the U-Save Hardware store. The construction would be too disruptive, Haddadin said, and drive customers away.

“Then the coronavirus came along and that was the last nail in the coffin,” he said, as a large, widescreen TV in the restaurant flashed images of a nation in panic on Monday. “So we decided not to go forward.”

Haddadin said his new landlord had offered a 50 percent reduction in rent as the pandemic crisis continued. Nonetheless, “we decided to move on.”

On Monday, the 53-year-old reflected on better times. He emigrated to the United States from Jordan in 1992, with his eye on becoming a certified public accountant. “But I never did,” he said. “I wanted to cook.”

After working at a friend’s crepe restaurant for several years, he opened the first Crepe House on Polk Street in 1996, eventually growing the business to four locations — adding Hayes Valley, Union Square, and Valencia Street.

The large TV that on Monday afternoon flitted images of global pandemonium was, in fact, the centerpiece of one of the Valencia Crepe House’s happiest moments: The 2014 World Cup.

“We couldn’t keep up with people coming in and watching games,” Haddadin remembered.

But, slowly, business dropped off. In the last three years, Haddadin noticed a difference on Valencia Street: Fewer people were walking around and sitting out on sunny days. He couldn’t definitively say why, but if he were to blame anything, it would be people staying at home and ordering from third-party delivery services like Caviar and GrubHub.

“I see people order a bagel and cream cheese,” he said, alarmed they would pay $3 for the bagel and $4 for the delivery fee.

Sometimes he would see their addresses. “Literally if I stuck my head out I could see their apartment,” he said. “I want to wave at them and say, ‘Hey, dude, don’t pay $4 — I’ll deliver it for you on my expense.’”

Although the Crepe House in Hayes Valley closed, and the Union Square location is now under different ownership, Haddadin emphasized that his store on Polk Street is still open for business.

And while all small businesses in San Francisco are in uncharted territory, Haddadin said “I have no plans to close Polk.”

We will update as we hear more.

COVID-19: From the Mission District on Tuesday, March 17

Your donations keep us at work. Thank you to all who support us. If you have not and you read Mission Local regularly, please do.