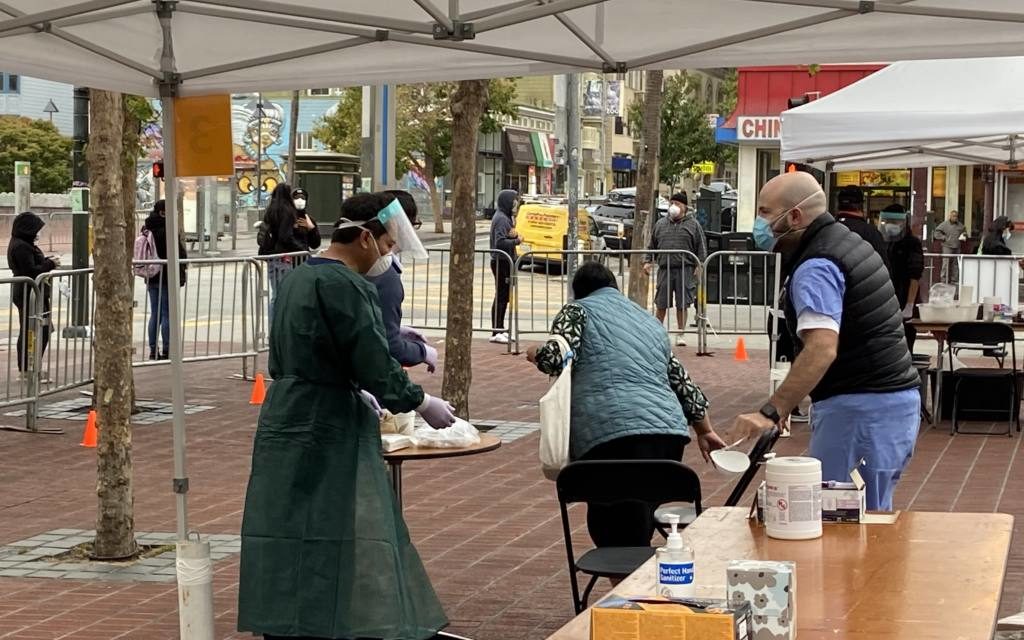 There’s a reason why activists of color are constantly pushing for increased covid-19 testing in the Southeast sector of San Francisco.

It’s where those most vulnerable to the virus live: Blacks, Latinxs, and low-income workers. And today, two UCSF doctors presented condemning data to prove it.

“The rates here in the eastern part of town generally exceed those in the western part of town by tenfold,” said Dr. Kirsten Bibbins-Domingo, the vice dean of population health and health equity at UCSF. About 31 percent of the city’s cases are in this sector, as we’ve previously reported.

The doctor presented findings that she and Dr. Margot Kushel published in a Los Angeles Times op-ed this weekend that point to how essential workers are being disproportionately confronted with the virus.

“The question is, how do we align resources with need?” Bibbins-Domingo said. “Recognizing that there are communities that have much higher transmission, have much higher disease and death, have the additional challenges of the economic crisis as well.”

Bibbins-Domingo sees those needs as testing, contract tracing and financial support for covid-positive residents and workers. The city is doing the latter through the Right to Recover program, which offers up to four weeks of minimum-wage pay to workers who must quarantine after they tested positive.

The doctor said today that UCSF’s three-week collaboration with the Latino Task Force to test workers at the 24th Street BART Plaza has “clearly indicated a need for more testing.”

“San Francisco has higher testing overall, but several faculty have proposed to the city that they monitor the data more closely and commit to making even more testing available in the areas where transition is high, including the Mission,” Bibbins-Domingo said.

Getting a clearer look on the disparate impacts on San Francisco residents and workers means looking at the data more closely and not relying solely on countywide data, she noted.

Statewide reopening relies heavily on individual county case counts. However, Bibbins-Domingo argues that this ignores how some neighboring cities or neighborhoods in a county possess deep inequities that make one population more at risk than the other, just as with the eastern and western parts of San Francisco.

“And yet, the criteria for opening our county, as well as all counties, is some average between the two,” Bibbins-Domingo said.

Essential to testing, she said, was also having culturally and linguistically competent contact tracers.

To that end, the Department of Public Health recently posted a notice to hire 30 more bilingual contact tracers and has started to train some at a few of the community-based wellness organizations.

Dr. Darpun Sachdev, who heads the Department of Public Health’s contact tracing efforts, said that a professional staff of bilingual contact tracers is “absolutely essential to our success” in an interview with Mission Local.

At present, the city has about 200 contact tracers, a fall-off from the higher number of 276 earlier this summer. But it’s a more stable force, Sachdev said, because many of the first contact tracers included volunteers and students who have since returned to their lives.

Currently, contract tracers are reaching some 77 percent of a COVID-positive person’s contacts, and of those around 40 to 50 percent get tested within the quarantine period, Sachdev said. She estimated that about 8 percent of those tested positive.

Still, testing and contact tracing may have limited efficacy when the transmission count gets too high Bibbins-Domingo said.

While city and community organizations are scrambling to mobilize resources, low-income workers, Blacks, and Latinxs continue to bear the brunt of the covid burden in both San Francisco and across the state.

A major reason that Blacks and Latinxs continue to be disproportionately affected by covid and maintain the highest-transmission rates relates to how many work low-wage jobs. A study by the University of California at Berkeley found that 63 percent of California’s low-wage workers are Black and Latino.

“The economic insecurity is a continuing driver to push people out back into the workforce, into workplaces, even if they might be ill or others in the household might be ill,” Bibbins-Domingo said.

For months, Latinx and Black community leaders have advocated for more testing in the Southeastern part of the city.

Testing sites like the pop-up at BART and the one at the Resource Hub are direct results of those efforts.

One of the organizers of the 24th Street pop-up site, Jon Jacobo, reiterated this to Mission Local during the site’s opening week.

“Follow the data,” Jacobo said of the site. “This is really targeted for essential workers, particularly in the Latino community. The southeast sector: the Mission, the Bayview, the Excelsior: focus on that, and we’ll lower the rate of transmission to the rest of the city.”

Other neighborhoods in this sector include Visitacion Valley and Sunnydale, where community leaders also launched testing and contact tracing.

Although numerous requests have been made, the city has yet to report testing data by site or even neighborhood.

Data from the BART testing site is yet to be available, but will be released by UCSF and the Latino Task Force.

In the meantime, Bibbins-Domingo said that the pilot demonstrated a strong desire for high-risk communities to get tested with as much convenience as possible. The site attempted to fast-track testing for essential workers who were on their way to or from work and made appointments free, which could be used as a model for future city testing sites in high-risk areas with low-wage workers.

Bibbins-Domingo said, “How do we make sure that our strategies: testing, contact tracing and support for isolation and quarantine really match the need in these communities?”