The breakdown on the left is for those people who tested positive for COVID-19.

The preliminary results from the UCSF study that tested 4,160 people who live or work in the Mission District show that 95 percent of those who tested positive for COVID-19 were Latinx.

Of the 4,160 people tested over four days, 1.8 percent were COVID-19-positive — or 74 people.  Of those who tested positive, 53 percent had no symptoms. In the city’s daily testing reports, the percent positive range from 3 percent to 17 percent.

“The people who tested positive were overwhelmingly going to work,” said District 9 Supervisor Hillary Ronen, adding that many might have been undocumented, without any option but to go to work. She said that “basic needs need to be met” when people are in quarantine.

The test results seemed to confirm what city officials, community members, and researches expected: COVID-19 is disproportionately affecting low-income people of color. “As many of us know, throughout the country and here in our backyard, we’re seeing a disproportionate impact on Latinos,” said Jon Jacobo, chair of the UCSF Study Committee for the Latino Task Force for Covid-19. “We have not escaped that reality here.”

Of the 73 community members who tested positive, 67 have been reached — meaning they’ve been told to isolate and will be connected to support services if needed. Just 15 of those 67 had a primary care doctor. Havlir noted the success of such a “test-to-care” system, and said it could be replicated as more testing becomes available. “If someone doesn’t know they’re infected,” she said, “they can’t do anything.”

The study is prompting Ronen to introduce legislation that will ensure that anyone who tests positive for the virus and who does not have a safe place to quarantine will receive a hotel room, as well as replacement wages if the isolation affects the person’s income. It would ensure the person receives food and supplies during the 14-day quarantine period. This kind of program would be especially helpful for undocumented individuals who have a harder time accessing government aid, and have been forced to work to put food on the table.

Initially, the test focused on census tract 229.01, one of the densest in the Mission District with among the highest Latinx populations. Researchers were able to test 2,959 residents and workers in that area, with 62 people — or 2.1 percent — testing positive. In the final day of testing, researchers extended testing to residents outside the area, testing 800 people and discovering 11 were COVID-19-positive, or 1.4 percent. Of the 401 volunteers, teachers, and “unclassified” community members who took the test, 1 tested positive.

Researchers performed two kinds of tests on the residents: a “PCR” test, which simply determines whether someone is positive — and a serology test, which determines whether someone has been infected in the past. The results announced today only pertained to the PCR testing. The antibody test results will be available in two to three weeks, Havlir said.

She emphasized the importance of community-based testing, in which the community can support individuals who test positive. “We all wish we had a vaccine, we all wish we had treatment,” she said. “But we don’t right now.” 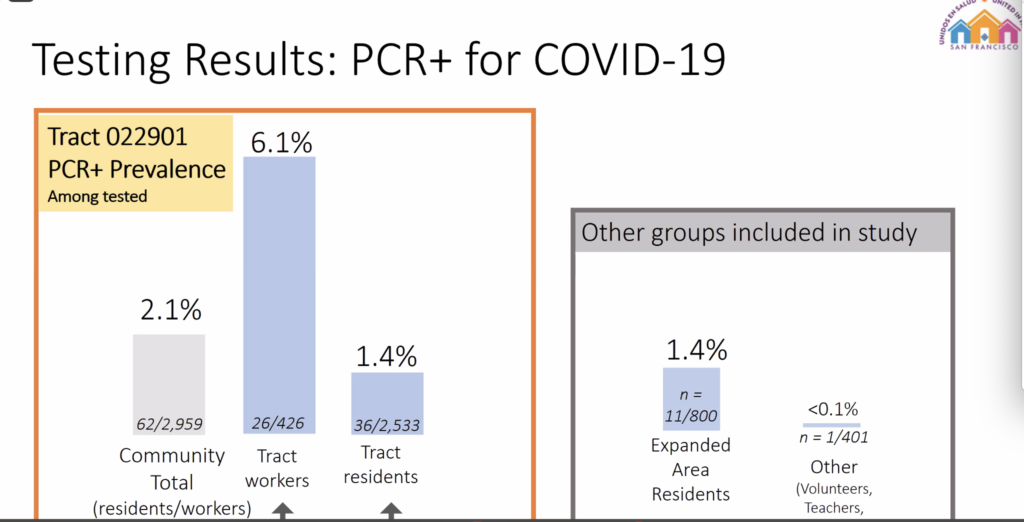 This is a developing story and we will be updating it soon.

In the meantime, please support our reporting.