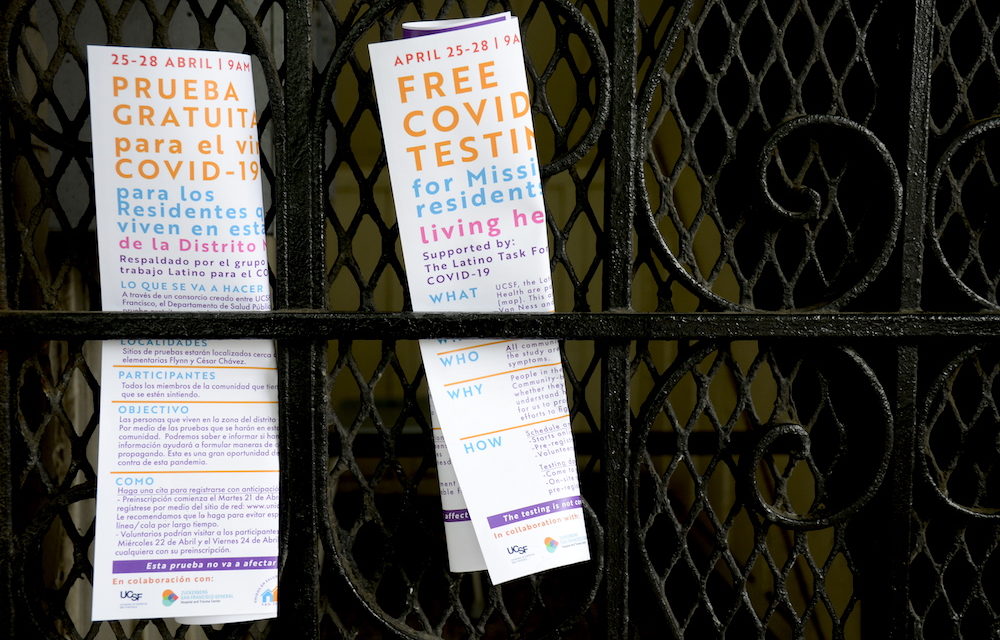 Free Covid testing flyers on Folsom Street residence. The Latino Task Force and UCSF collaborated on the project and the Right to Recover funds came out of that experience. Photo by Lola M. Chavez

Starting this week, San Francisco workers forced to quarantine with COVID-19 will be assured income support for two to four weeks.

The initial tranche of $2 million in funding will be “on the streets this week,” said District 9 Supervisor Hillary Ronen during a town hall meeting with the Latino Task Force and UCSF researchers.

The fund will cover COVID-positive residents or workers without access to sick leave, unemployment benefits or other publicly funded cash assistance.

“The key to the Right to Recover program is it’s easy to get this replacement income, that we take away the barriers,” said Ronen.

The Department of Public Health calls everyone who tests positive for COVID-19 and people will now be asked if they have income during the two to four weeks they need to recover. “It is completely based on self-reporting,” Ronen said.

If a person says no, they will be connected to a social worker who will ensure that they get to the next step of securing funds through one of the community-based organizations.

Until now, workers unable to count on sick pay or unemployment funds, had no recourse to provide for themselves and their families – a critical barrier as the city tries to encourage essential workers to take advantage of free testing.

The Right to Recover program, funded by the city’s Give2SF fund, came directly out of the needs that the Latino Task Force and UCSF witnessed in their April COVID-testing study in the Mission District.

The findings underscored the need to encourage widespread testing among essential workers. But to do that, the researchers and the Latino Task Force viewed a Right to Recover program as essential.

Diane Jones, a retired HIV nurse who worked on the Mission testing campaign and the recent Bayview campaign, said that on the last day of testing in the Bayview four workers – wearing t-shirts from the same restaurant – came up with several questions including:  “If I test positive, do I have access to funds to help support me financially self-isolate?”

At the time, the Right to Recover was still in progress so she had to say “no.” They decided against testing.

The first allocation of the Right to Recover program will be administered by the Mission Economic Development Agency in the Mission District and Young Community Developers.

It will be expanded to other community-based organizations in Chinatown, the Tenderloin and Soma in the future.

The Latino Task Force is now working with the city to have a mobile testing site in the Mission District.

This story has been corrected. We reported earlier that if someone recovered from COVID-19, but lost income during the period of their recovery – and had no recourse to other funds —they would be eligible for the Right to Recover funds. That his incorrect. This is only for current COVID-positive individuals without recourse.