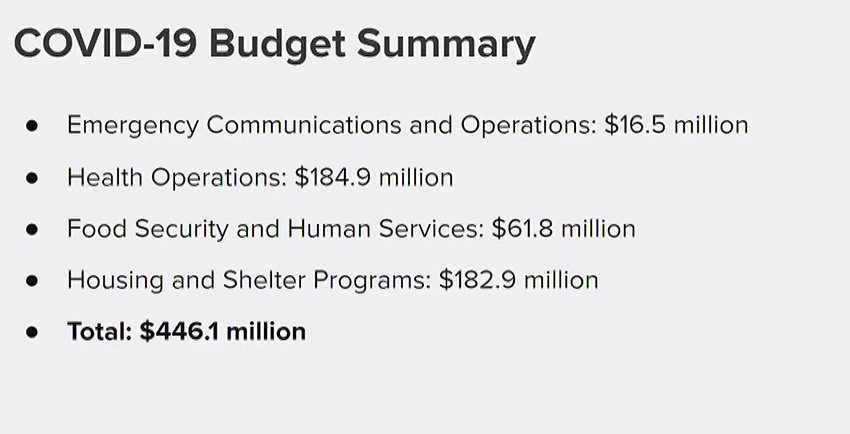 Source: Office of the Mayor

Declaring, “We are going to be living with this for some time,” Mayor London Breed unveiled $446.1 million in new COVID-19 spending.

The budget includes $55.9 million to expand testing, $44.2 million for personal protective equipment, and $12.7 million for community outreach and engagement in priority neighborhoods, such as the Mission, Bayview, Sunnydale and the Tenderloin, Breed said.

The budget also provides $182.9 million for housing and shelter programs, including hotel rooms for vulnerable individuals without access to housing so they can safely shelter in place or recover from COVID-19, Breed said. 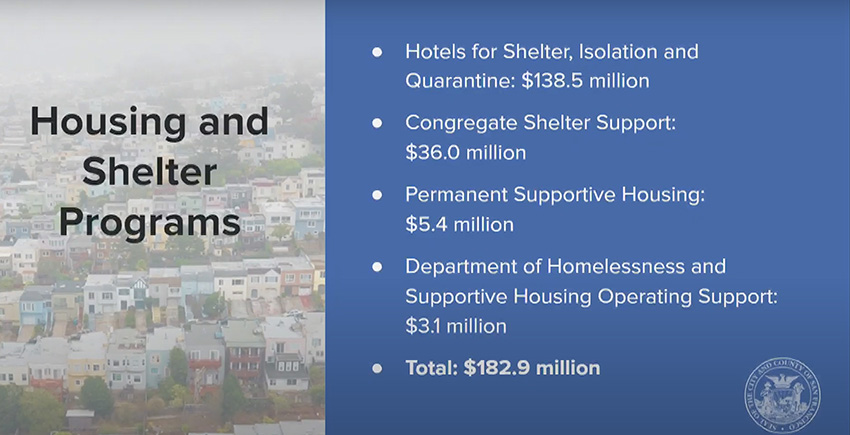 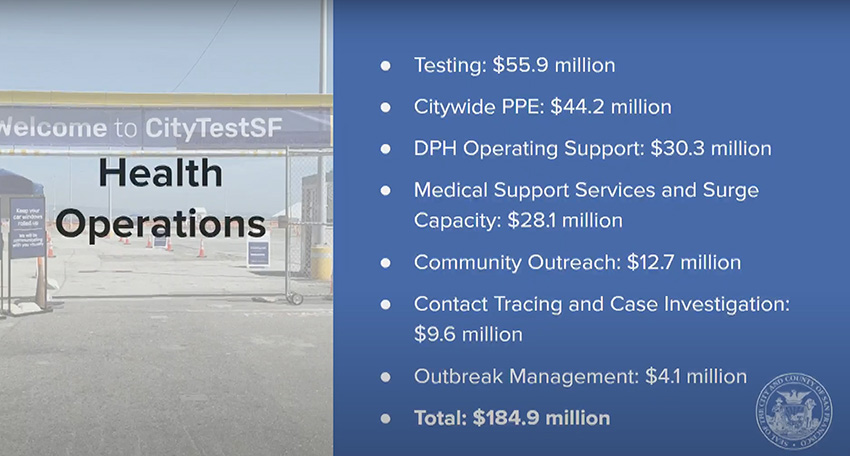 You can see the full budget here.  And you can watch the press conference here.

Breed and Dr. Grant Colfax, the city’s health director, again stressed masks and distancing as the immediate steps all residents can take to reduce the number of new cases the city is seeing.

At present, new cases a day stand at 85. Although that’s down from July’s peak, it’s still well within the high alert range, and will keep San Francisco on the state’s watchlist and prevent the city from reopening.

“This is one of our key health indicators,” said Colfax. “Anything above 15 new cases per day puts us in the red zone on our highest alert level, and we have been there for the past seven weeks. So even as we see some of our numbers improving, let’s stay vigilant.”

In perhaps the most positive news of the press conference, Colfax said that, in the last few days, the city’s effective reproduction rate had dropped below one to between .98 or .95. If so, this means that the surge has stopped for the moment.

If the effective reproduction rate stays below one for a long period of time, the virus will eventually die out.

Colfax said the city uses hospitalizations to calculate the effective reproduction rate and works with UC Berkeley and UCSF to model the rate.

Others, including Lee Worden, an applied mathematician working in epidemiology at UCSF, and a team of collaborators, put the city’s reproduction rate at 1.09. Still, it indicates we’re clearly heading in the right direction.

Beyond noting areas where the $446 million will be spent, the two officials offered few specifics. They were also vague on what has eased the surge that began more than a month ago and put the city’s reopening on hold.

When asked if any cases had been traced to Dolores Park or Valencia Street, Colfax could not say. “With regard to specific outbreaks, I can’t comment on drawing conclusions from the gathering in Dolores Park except to say that it is risky behavior. We’re very concerned about it and our message continues to be, do not gather unless absolutely essential.”

When asked why the surge eased, Colfax said, “We can’t draw any one action with regard to cause and effect with regard to the decline in the number of cases.”

However, he went on to say that once the surge became clear, targeted testing in the impacted neighborhoods, as well as public health campaigns, might have been effective.

The focus on neighborhood testing began mid-summer and, in many cases, at the behest of local advocates such as the Latino Task Force in the Mission or the Rafiki Coalition and UCSF in Sunnydale.

The positivity rates at testing sites in the Mission and elsewhere have been between 7 and 9 percent, according to local health advocates, indicating the city is now testing in places where the outbreaks are occurring.  Latinos have long been disproportionately impacted and now account for 50 percent of the city’s cases, according to the Department of Public Health.

“We worked with community members, key stakeholders, physicians, clinicians and people in neighborhoods most affected by COVID-19, particularly in the southeastern part of the city, and really worked to get the message out that everyone needed to be aware of this and to access testing,” Colfax said.

Although the press has been filled with numerous stories about delays in testing, Colfax said that the delays have been remedied.

“Those turnaround times have averaged, generally, 48 to 72 hours,” he said, referring to the 3,100 or so tests a day that the city has processed recently. “A few weeks ago, we did fall behind because of the great demand and surge for testing. We have now caught up on that and are increasingly looking to expand our city test capacity.”

Keeping an eye on Misson data scientist Peter Khoury’s work on testing delays will be one way to monitor the city’s progress in processing tests in a timely fashion.

On contact tracing, Colfax said 300 people had been trained. “Again, we are starting to catch up from that glut of cases and the numbers are improving significantly from where they were just a week or so ago.”

The Public Health Department’s key indicators on testing put the cases reached over the last two weeks at 73 percent (moderate alert) and the number of contacts reached at 73 percent (low alert.)

To be fair, the city’s catch-up on contact tracing will best be judged by looking at the numbers two weeks from today. We will check back.

If you read us often, and haven’t yet, please contribute. We depend on our readers.