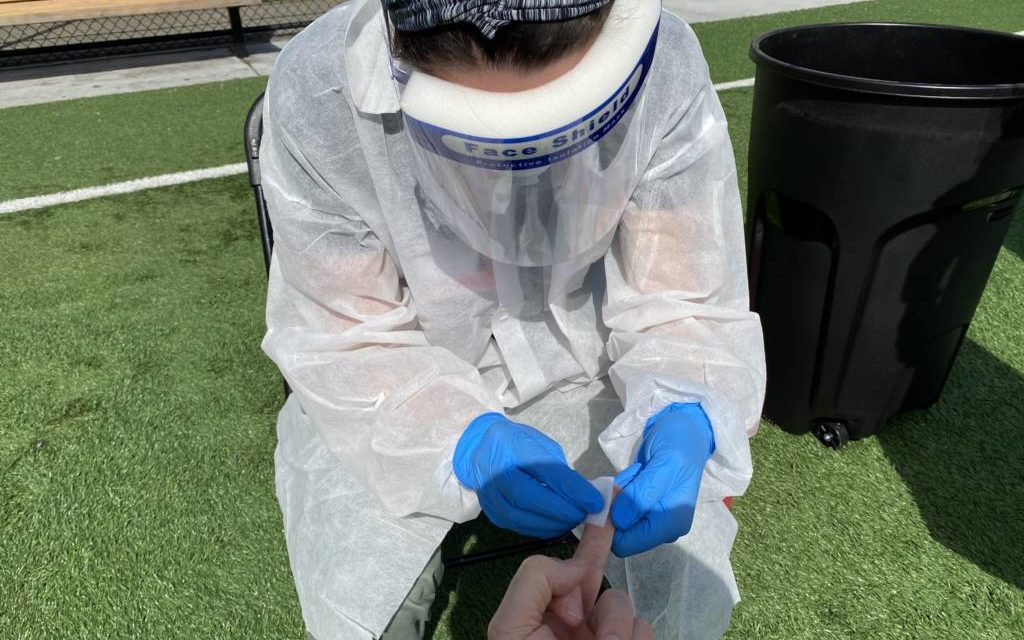 Sushi is in the news of late. In yet another attempt to grab the brass ring of the defining San Francisco image in times of COVID-19, an enterprising restaurateur is offering diners the option of consuming $200-a-head sushi dinners in a cordoned-off corner of Mint Plaza, only a few meters from where homeless people congregate.

Conspicuous consumption an arm’s length from misery is commonplace enough in San Francisco that someone may want to think about translating that line into Spanish and making it our city motto on our new city flag. But what really pushes this moment into that wondrous realm of San Francisco self-parody is that diners are ensconced within tiny, transparent geodesic domes of the sort Buckminster Fuller might have designed for exhibitionists.

Well, nobody wants to think about that. But it did get us thinking about sushi. No matter how much you pay for sushi and no matter how good it is, it’s a substance with an extremely limited shelf life. Leave it sitting around for even a little while and, soon, it’s worthless.

And that got us thinking about San Francisco’s attempts to corral COVID-19. In every realm that has managed to get a handle on this pandemic, the turnaround time between someone deciding to get a test, getting the results, and, if positive, being tracked down by a contact tracer and case investigator is minimal — a day or two.

Ideally, says Dr. Darpun Sachdev, who heads the Department of Public Health’s contact tracing efforts, it would only take 48 hours from someone developing symptoms and/or contemplating a test to receiving a call from a contact tracer.

But that’s not happening. If you want to get a test in San Francisco, the current wait at city sites tends to hover between nine and 11 days. Getting your results can take several days more — or, in all too many instances of late, the better part of two weeks.

These glacial turnarounds make a mockery of any attempt at contact tracing.

Among the multitudes of COVID data the city posts online, you won’t find the elapsed time between someone being swabbed and receiving a call from a contact tracer.

But it’s there — if you give the data a deep swabbing. And Peter Khoury did that.

The Mission District data scientist combed through the day-by-day testing results through the latter two-thirds of July, measuring how long it required for positive cases categorized as “unknown” to be reclassified as emanating from a “known contact” or the more ambiguous “community spread.”

In six to nine days, an individual can cough on half the residents of San Francisco. Pretty much all a contact tracer or case investigator can do after so much time has elapsed is watch the rear end of the horse as it disappears into the distance, having long since galloped out the barn door.

San Francisco, then, is putting great deals of money and effort and brainpower behind testing and contact tracing, but to what effect? This city has bought plate after plate of $200 sushi — and left it to rot.

Like a Coen Brothers film, the above graphic Peter Khoury created warrants a few views. There’s just too much to take in on one go.

Everyone’s busy now, but it’s only nine seconds long. You have time.

Try focusing on just one column. You’ll notice cases keep trickling in and being sorted, even days and weeks later.

After you’ve done that, watch how the yellow “unknowns” are gradually recategorized by case investigators into blue “from known contact” and orange “community spread.”

It’s not quite playoff baseball at AT&T Park, but there is a lot of orange to see here. Too much: In June, the city was able to nail down the source of an infection just about as often as it was forced to assign the ambiguous “community spread.” But in July, with far more cases, “community spread” beat out “from known contact” by a 2-to-1 margin.

What does this mean? It means that not only is this city undergoing a COVID-19 surge, but we don’t really know where it’s coming from and how it’s spreading.

The ratio of known to unknown origins “is something for us to be paying attention to,” says Sachdev. “What we would ideally see in this epidemic, if we were able to control it, is more and more people being identified having had a known contact — somebody with COVID-19 — and thereby suggesting we’re on the right track.”

But we aren’t. Rather, it’s the opposite of that.

The six-to-nine day delays really aren’t the fault of Sachdev or her charges; they can’t start running until the baton is in their hands, and it’s just taking too damn long for that to happen. The data culled by Khoury, in fact, indicates that contact tracers are making calls pretty quickly: within hours or, at most, two days, of the city receiving results.

But when they do reach people, they’re not learning the information we’d most want to know.

And that’s bad news for everyone. 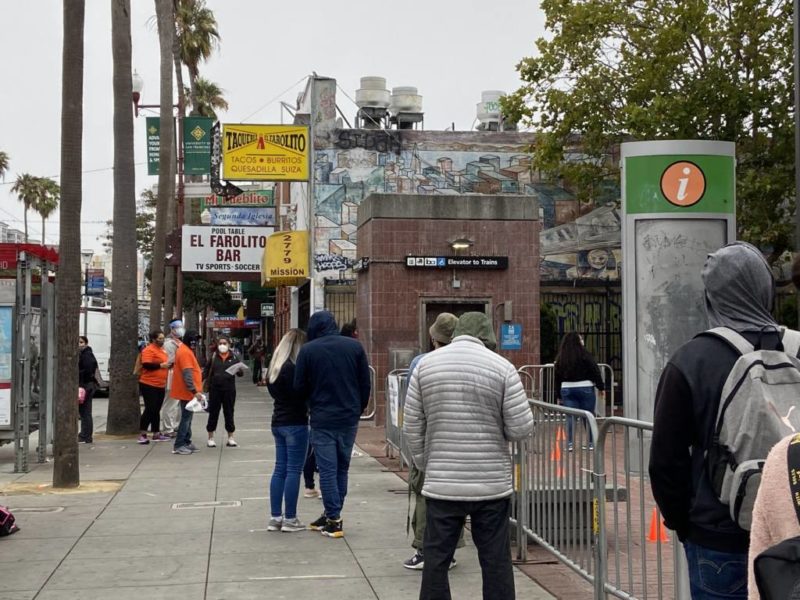 Dozens of people lined up before 7 a.m. to get tested on the first day of the 24th Street pop-up COVID-19 test site. By Annika Hom.

In case you’re wondering, yes, people’s memories do fade significantly after a few days, rendering contact tracing even more difficult and ineffectual. Dr. Kim Rhoads is a UC San Francisco professor of epidemiology and biostatistics, and the director of community engagement for the cancer center. She notes that Oakland’s Roots Clinic, anticipating long delays, simply hands test subjects a pen and pad and asks them to keep track of their contacts beforehand — just in case.

This pen-and-pad technology would be a good idea here. And, no, San Francisco contact tracers don’t ask you about going to stores or riding on the bus — they focus on people you spent in-person time with for 15 minutes or more; unsurprisingly, most close contacts turn out to be family or roommates.

So we could do better. But that’s not really the point.

Rather: Contact tracing is the government’s coup de grâce against COVID-19 — if everything else is going well. But it’s hard to overstate how far that is from the case.

There is, right now, simply too much COVID-19 in the population for contact tracing to be effective.

Swartzberg pegs this at only about 3 percent. And that’s around the ratio of positive tests in San Francisco these days.

“With exponential spread, 3 percent — well, you don’t have enough contact tracers to balance the number of people to be contacted,” adds Rhoads.

COVID positivity in the United States is nearing 2 percent: “Contact tracing, nationally, will soon not be useful,” she says.

That, too, is horrifying.

But, albeit to a lesser extent, so were we. Considering the limited testing and contact tracing resources at its disposal, California — and San Francisco — clearly chose overly aggressive paths to re-opening.

And without adequate testing and contact tracing, we don’t have too many more options other than shutting down.

Government officials aren’t wrong to urge people to wear masks and keep physically distant and wash their hands and, generally, not behave like selfish idiots. But, after a while, it feels like a dodge. We need to do all of these things, but unless we can effectively test and trace, we are doomed to a Groundhog Day–like repetition of re-openings and re-closings.

Like so much else these days, nobody knows when we’ll develop that ability. Or if.

“We’re not going to go back to normal. So much will be destroyed after this,” says Rhoads. And if where government isn’t able to help, communities will have to help themselves.

“Communities will need to build that up. I see this as practice on how to work together.”

It is quite the silver lining to state we’ll build a better world after this one crumbles.

But, like that COVID test slot 11 days down the road — or aging sushi — we’ll take what we can get.

If you like our coverage, please support it. We count on our readers.