San Francisco tests for COVID-19 more than most anywhere else, but does it have a strategy? 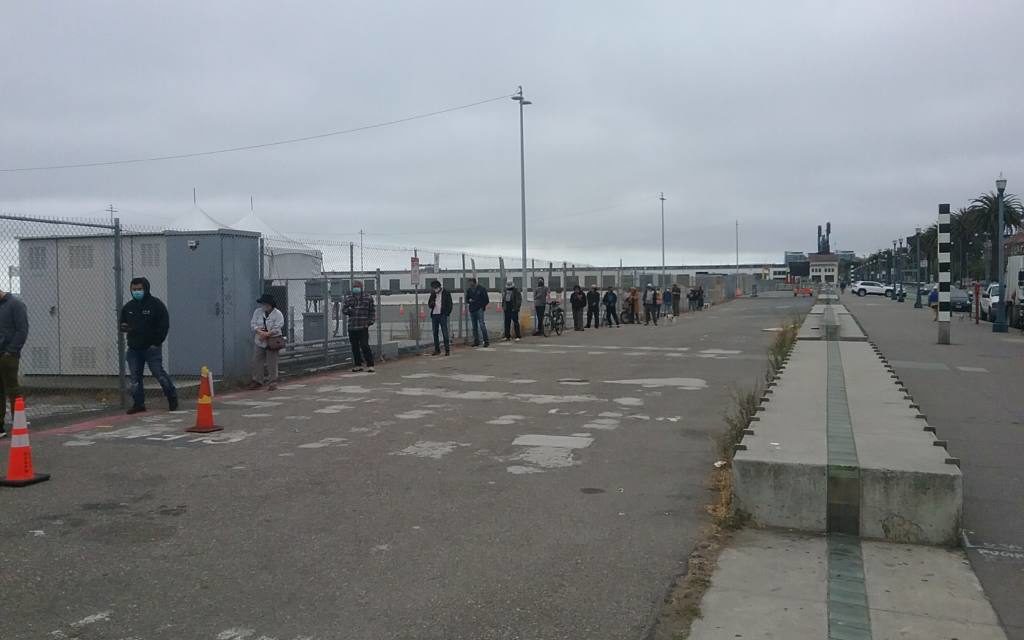 On July 20, an hour-long line at Piers 30-32 awaited San Franciscans who had been made to wait perhaps two weeks for a COVID test. Photo by Joe Eskenazi

The masked figures emerge from parts unknown and begin lining up for COVID-19 tests far before sunrise. They are construction workers, cleaners and line cooks — the so-called “essential workers” given a pat on the back for holding society together and then shunted back into lives of crowded, problematic jobs and crowded, problematic living conditions.

Many are immigrants, and nearly everyone is a Spanish speaker. If you’re fortunate enough to be riding out the pandemic in a comfortable place, these are the folks you only see while undertaking a transaction: They’re building or remodeling your homes and cleaning them; they’re preparing and delivering your food. And they’re here at the Mission Latino Task Force’s weekly pop-up COVID-19 testing site by 7 a.m.

At a shade before 10 a.m., the members of the task force, along with representatives from the Department of Public Health, the genomic testing outfit Color, and the odd passerby form a circle for a prayer ritual. Bundles of sage are ignited and, at 10, the COVID-19 testing begins.

But that nearly didn’t happen.

On the eve of July 16, the Latino Task Force organizers said the Department of Public Health informed them they’d be allotted just 100 tests. Argumentation ensued. And, in the end, the Mission site ended up testing more than 350 people before running out of supplies 90 minutes early.

On the eve of July 23, the Latino Task Force organizers said the Department of Public Health told them they’d be allotted just 200 tests. Argumentation ensued — to the point where the Latino Task Force made it clear that they were willing to hold a highly visible protest instead of running the tests.

One day later, on a bright Thursday morning, men and women sat themselves in white folding chairs set up in the middle of Alabama Street, oblivious of the prior day’s struggle and ultimatum. Organizer Jon Jacobo, outfitted in a black mask complementing his Giants jacket, took it all in.

“Every week, we have to fight for additional testing capacity,” he said with a sigh. “I understand that, at the federal level, we’re led by a buffoon. What I do not understand is that, in a city like ours, with a $12 billion budget and the brilliant leaders we profess to have, we’ve had seven months and we cannot figure it out: This is Ground Zero. If you want to stop the outbreak, you test here. Put your resources into the city’s Southeast corridor. Especially if you have limited resources.”

Threatening to “kick up some dust” regarding those tests, Jacobo said, was necessary: It’s the Latino Task Force’s obligation and raison d’être to provide for its community.

And that’s so. But this is ostensibly the Department of Public Health’s obligation and raison d’être, too. And, while a group of community activists can — and should — be expected to do what they gotta do, this incessant last-minute head-butting and wrangling and drama and bargaining reveals a larger lack of coordination and methodology and organization in how this city disseminates its resources for COVID-19 testing.

That strategy can be difficult to parse. As can, frankly, the true extent of city resources.

Dr. Kim Rhoads is a UC San Francisco professor of epidemiology and biostatistics, and the director of the school’s Office of Community Engagement. In her efforts to bring equitable testing to the city’s neighborhoods, she’s asked the Department of Public Health — on more than one occasion — just how many tests it can administer and process. And she has not yet received a straight answer.

She doesn’t assign malignant intent to this, but, “what I’m finding out about the Department of Public Health is, it always depends on who you talk to,” she says. “You get different answers from different people at different times.”

Groups like the Latino Task Force have been able to wade into the morass and obtain at least some of what their communities need. But other groups, serving communities equally afflicted — or perhaps even worse off — have not.

“What I see is people getting fed up with bureaucracy, so they go around it,” Rhoads continues. “And that is admirable. But it means things are disparate. We are able to bring resources into one area, but not another.”

And, next week, who knows? 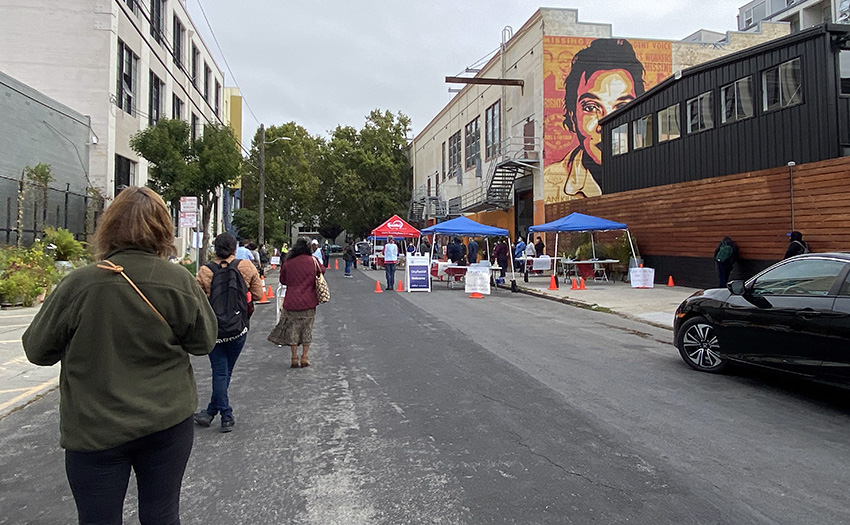 July 23, 2020. The line for seniors on the left and for others on the right. The line for everyone started at 7 a.m. on Alabama, went to 20th street and wrapped around to Florida Street. Photo by Lydia Chávez.

San Francisco is a city that, even in the best of times, barely manages to hold it together.

In this way, our approach to testing has a familiar ring to it: We’re spending more and doing more and apparently doing better than most everyone else — but we’re still barely holding it together.

And all of that is true. And yet, at around the time this was being said, an essential worker — with multiple potential COVID-19 symptoms — could click onto the CityTestSF website and find themself being made to wait two weeks for a test.

We may be testing more than anyone else, but that doesn’t matter when people have to wait aeons for an appointment or a result.

“If you’re sick, are you going to wait at home for 11 days for a test? No, you’re going to go out and potentially spread it,” says Dr. Jake Scott.

He is, himself, a Stanford infectious disease specialist whose day job entails treating COVID-19 patients. When he recently came down with a fever and chills, he was told it would take him several days to wrangle an appointment and several more to process the test. He ended up driving to an emergency room to get a rapid test (he’s fine).

“This is an example of how insanely difficult it is to even get information about getting tested. I have all the resources at my disposal. I am an infectious disease doctor! And I couldn’t even find out.”

“The failure of our country to adequately test people has been the biggest failure,” he continues. “And it persists.”

As such, Mayor London Breed and Health Director Dr. Grant Colfax last week announced a massive augmentation of testing capacity, adding some 1,400 daily testing slots to the average of around 3,200 the city has managed for the last several weeks.

Color, which will process the tests, and also works with Marin and Alameda counties, tells us it can run 10,000 a day in its Burlingame facility, and 10,000 more at its East Coast lab. Carbon Health, which will be staffing the sites, says it has moved, at the city’s behest, to quadruple its workforce.

At the same time, a health order last week mandated private healthcare facilities undertake more COVID-19 testing, opening up some of those city-provided slots for the people who truly need them. 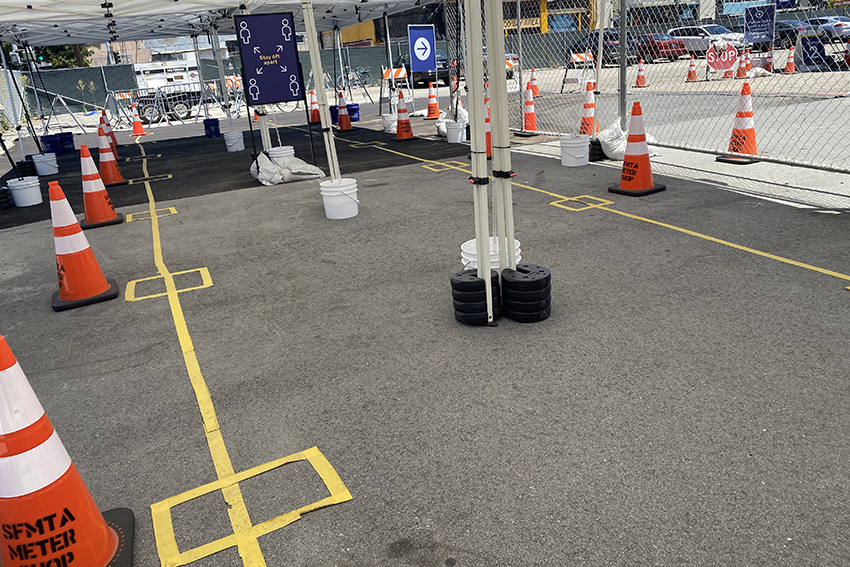 All for the good. And yet, why did the wheels nearly come off of San Francisco’s testing apparatus in July, when we began cracking 3,000-odd tests a day?

After all, as far back as April, the Department of Public Health stated that our daily testing capacity, between its own facilities and those of partner institutions, was 4,300 — with Color able to add 1,500 more to that.

These figures were repeated, frequently, both in public and behind closed doors; they were quoted in both the local and national press.

Again, one needn’t assign malignant intent. But those figures were, clearly, not accurate.

How is it that public health officials led us to believe that the city had the capacity to collect and process 5,800 tests a day?

In a nutshell, some of the partnerships the city was counting on in April don’t seem to have quite panned out.

Mission Bay’s Chan Zuckerberg Biohub — among others — was included in Health Department statements about the 4,300 daily tests. But, at that time, the Biohub did not have an interface in place to expediently record the race and ethnicity of test subjects. That’s a serious matter in a racially stratified place like San Francisco, which has featured such fantastically disproportionate infection rates for Latinxs. And San Francisco hasn’t yet slotted the Biohub into its regular testing rotation.

So what is our capacity right now? That’s hard to say. But, without relying on outside providers, the Department of Public Health claims it can process around 1,050 tests a day between the public health lab (660 a day)  and the General Hospital clinic (390 a day). When these grew overloaded, that led to the maddening delays on recent pop-up testing results.

Joe DeRisi, an infectious disease specialist and co-president of the Biohub, said the interface issue has been resolved — but, at present, the Biohub’s capacity of 2,688 tests a day is shared with some 30 of the state’s 58 counties. The processing is free and more than 90 percent of the tests are processed within 24 hours.

He called the situation “very fluid,” and said they talk to counties daily. But, right now, they could only accept an average of 200 tests a day from San Francisco. The Department of Public Health, he said, reached out again last week.

So, in the meantime — and even including the pending expansion — we are still far from the 5,800 figure the Health Department stated so many months ago.

So, San Francisco has tested and tested and tested some more. But this is a numerator without a denominator; it remains to be seen if we’ve tested effectively. “The bigger picture is containment,” said Rhoads — which means applying those tests where they are most needed.

Here in the Mission, the Latino Task Force has scratched and clawed to get even a portion of the tests the community requires. But, Rhoads notes, down the road in Sunnydale, they’ve never received nearly as many until quite recently. Why? Beats her.

“If someone said ‘here’s why, and it’s based on the number of cases … ’ that would make sense,” Rhoads continues. “But that hasn’t happened. I just don’t think it’s centrally coordinated.”

If the doctor had her way, we’d spread out testing equally among the city’s beleaguered communities, monitor the results, and then push the resources where they’re needed. But this, too, isn’t happening, at least not yet. And, as the Mission has demonstrated, even where needed, community workers have had to argue and cajole and agitate for resources every week.

“The Department of Public Health cares a lot,” says Rhoads. “But they need a strategy.”

And that’s the real test.

*This story has been updated. The Chan Zuckerberg Biohub claims it has since fixed its problematic interface issue — but its heavy capacity would have to be split among many counties, leaving a sliver for San Francisco, not a large slice of the pie.