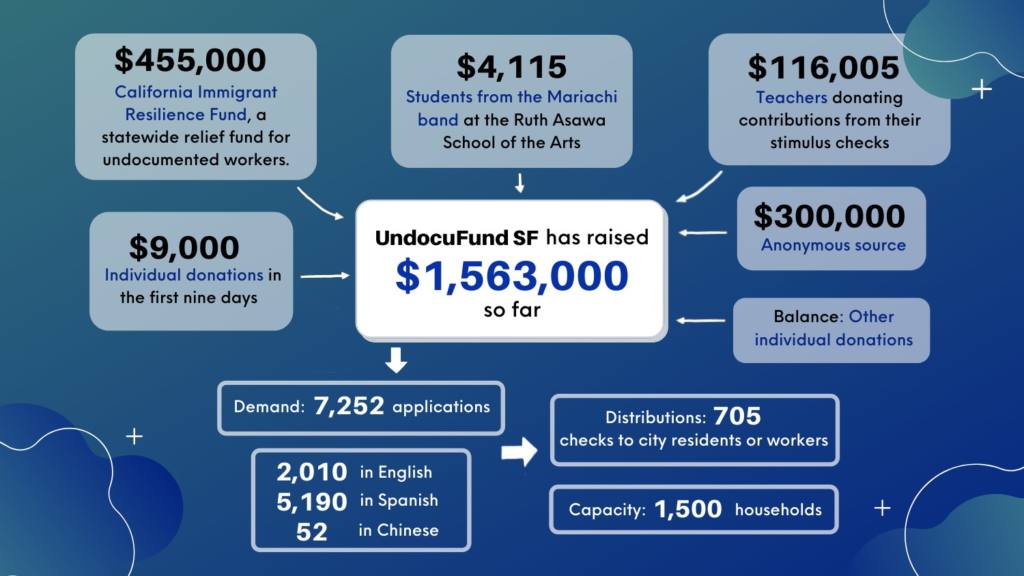 As the city shut down in mid-March, dozens of community leaders hopped on a Zoom call to discuss the inevitable. Millions of workers nationwide would be affected by the coronavirus, and members of Jobs with Justice San Francisco, a worker’s rights coalition, wanted to help.

They realized undocumented workers could be hit hard; their immigration status bars them from receiving federal aid like unemployment checks. Approximately 35,000 San Franciscans are undocumented.

“It became clear that undocumented people were being disproportionately affected,” Tracey Brieger, the campaign director of Jobs with Justice said. “So we said, what can we do?”

Read more of our coverage on the experiences of immigrants during the pandemic here.

Thus came the idea for UndocuFund SF, a nonprofit that provides economic relief for undocumented workers who live or work in the city, that has raised $1,563,000 so far and disbursed 705 checks of up to $1,500 to city residents or workers.

To get started, Jobs with Justice members sought advice from the original UndocuFund in Sonoma, which disbursed $6 million to 1,900 undocumented families following the Sonoma wildfires in 2017.

Soon, the nonprofit was up and running: Dolores Street Community Services was deemed the nonprofit’s new official residence. The Chinese Progressive Association took over finances. Other community organizations within Jobs with Justice, like PODER SF and Mujeres Unidas y Activas, supplied more than 80 volunteers to man the phones and review applications.

By April 1, the application and fund for COVID-19 relief went live. Applicants had to fill out an online intake form, wait a few weeks to get in touch with an UndocuFund SF volunteer, then complete a phone interview verifying their identity and financial losses. A week or two after that, a debit card would arrive in the mail.

The total funds raised will serve more than 1,500 households, Brieger said. But so far, the need far outweighs the nonprofit’s resources: The total number of applications the nonprofit received is 7,252. Of those, 2,010 are in English, 5,190 are in Spanish and 52 are in Chinese.

Correctly anticipating that interest would outstrip resources, Brieger said that the coalition had done minimal advertising of the program.

Additionally, she tried to limit the number of requests by closing applications on May 12 and opening a waitlist. After attracting nearly 3,000 requests for the waitlist, the fund closed it on June 22.

Brieger said she hopes an influx of donations — perhaps a few from some well-to-do tech donors — will allow the organization to address all the need. Still, the local generosity so far has overwhelmed her.

The first day the fund opened, it received nearly $9,000 in individual donations. Later on, it was bolstered by a $455,000 donation from the California Immigrant Resilience Fund, a statewide COVID-19 relief fund for undocumented immigrants.

An anonymous donor gave UndocuFund SF $300,000 on the condition that donations be divided into $1,500 debit cards for applicants with at least three children in the family, citing the greater need for a family of that size. So far, 218 such households have been served.

Around the same time the Jobs with Justice Zoom call unfolded, Frank Lara, a teacher at Buena Vista Horace Mann K-8 Community School, called on his coworkers within United Educators of San Francisco to donate portions of their stimulus checks to undocumented students and their families.

The first documented donation from a San Francisco educator came on April 17. So far, the union alone raised $116,005.

“It’s just a tremendous and touching show of solidarity,” Brieger said. “Teachers are not the highest paid in San Francisco.”

One of the teachers who donated, Tristan Arnold from Ruth Asawa San Francisco School of the Arts, received a message from one of his mariachi band students, Plyfaa Suwanamalik-Murphy. She asked for her classmate’s contact because she had an idea for a fundraiser for undocumented workers.

Suwanamalik-Murphy, a 16-year-old junior at Ruth Asawa, said that she wanted to raise money for undocumented workers after reading about their struggles during the coronavirus in an article.

Alexander Haken and Emma Kositsky, two other mariachi bandmates, joined Suwanamalik-Murphy in the midst of Advanced Placement testing and put on an online mariachi concert campaign which raised $4,115. They decided to give the proceeds to UndocuFund SF after Arnold put it on their radar.

“To help flatten the COVID-19 curve, we need to support everybody, undocumented or not,” Suwanamalik-Murphy said. “Stimulus checks give these workers the opportunity to stay safe.” 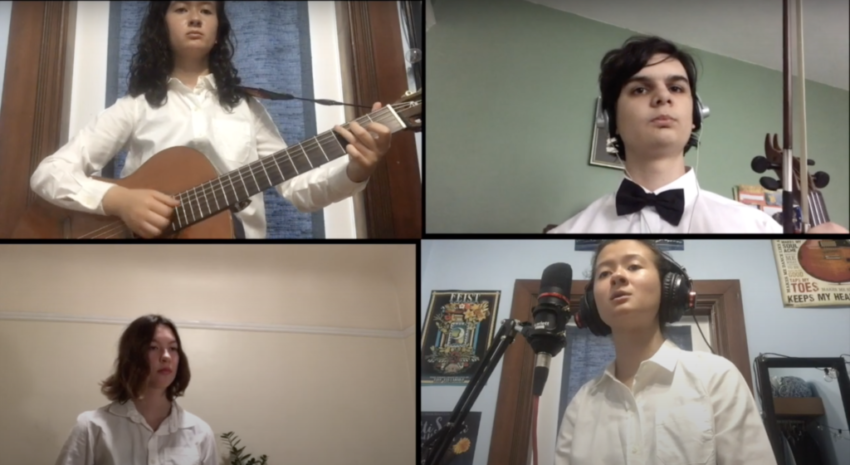 Students from the Ruth Asawa School San Francisco School of the Arts Mariachi Band put on a performance to raise money for UndocuFund SF. Emma Kositsky (top left and bottom right), Alexander Haken and Plyfaa Suwanamalik-Murphy recorded their parts separately and had Suwanamalik-Murphy edit it into one video.

Other community groups advertised the funds on their pages, asking those with “health insurance, stable housing or societal privilege in any way” to donate a portion of their stimulus checks, too.

Josseline Calderon, 24, found out about the money through her volunteer friends at Poder SF and the Raza Legal Center.

Calderon applied in April and received a call from UndocuFund volunteers for her phone interview in May.  She received the debit card about two weeks later.

She said she felt so emotional when she received the check. Calderon lost her job as a nanny in mid-March and her boyfriend lost his construction job. They have two kids, ages 5 and 7, and little savings. She and her boyfriend were able to keep up on rent, but other bills started to pile up. She’s already spent more than half of the debit card to pay them off.

“I will try to save the rest for the future,” Calderon said in Spanish.

Local funds like this helped out Calderon immensely. She and her boyfriend tried to access the $500 from the state’s Disaster Relief Assistance for Immigrants fund, but like many other San Franciscans, have been unable to get through to staff due to the high volume of applications.

“I understand that the truth is, there are many people [who need it],” Calderon said. “But also it’s sad and really hard when you don’t have money.”

If you wish to donate to UndocuFund SF, do so here.

This story was supported by the Pulitzer Center for Crisis Reporting.  To support our ongoing coverage, please donate here.