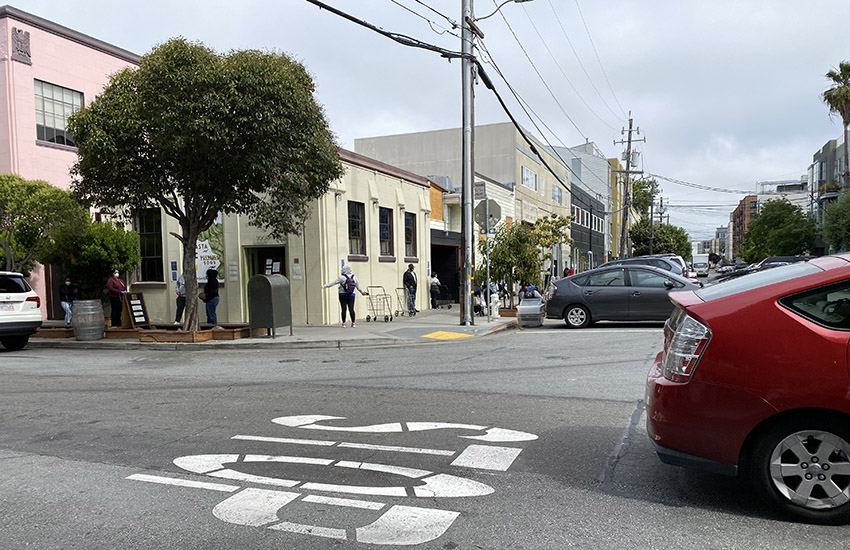 At food lines wrapping around blocks, Mission District residents talk about the difficulty of getting state assistance. Photo by Lydia Chávez

The largest state relief program for undocumented immigrants has $500 debit cards reserved for approximately 3,000 San Francisco residents — but getting one of those cards is proving to be as difficult as finding a Golden Ticket to Willy Wonka’s Chocolate Factory.

The demand in a city with some more than 35,000 undocumented residents overwhelmed and crashed the hotline on the first day it opened.

“I think you can see that the demand far outweighs the number of people that are able to be served,” said the associate director of communications and marketing at Catholic Charities SF, Liza Cardinal Hand.

The application window runs through June, but the money is likely to run out before then, said Hand.

In the program’s first two weeks, 59 percent of the money has been given away, according to Catholic Charities.

For many immigrants, the process has been grueling.

Roberto, a Mission resident, began calling on the first day at 8 a.m. only to get redirected to a recorded message telling him that the lines were busy, call again later. He got the same recording in every attempt.

Roberto said he thinks an online application would make the process easier. Currently, 100 staff members work for the San Francisco, San Mateo and Marin hotline that he calls — an area that a 2013 estimate is the home of 112,000 undocumented residents.

And those numbers are likely higher. The American Community Survey’s latest five-year survey estimated that some 250,000 foreign-born non-citizens live in the three counties.

Mirta, a 45-year-old Mission resident and her husband, also failed to get through. The couple took the initiative and visited Catholic Charities to apply in person and were turned away. The nonprofit does not allow in-person applications because of COVID-19, they were told.

“We have some savings, but it’s difficult,” said Mirta. “Too many people are calling and they can’t answer.” She finally gave up.

Catholic Charities is aware of how difficult it can be to get through to the hotline, which runs Monday to Saturday, from 8 a.m. to 8 p.m.

“It’s impossible to answer all the phone calls,” said Diana Otero, director of operations for the center of immigrants at Catholic Charities. “I just want to make sure that people keep trying. It’s not easy and not simple. I hear their frustration but they need to keep calling.”

Once through, there are other challenges, but the operators can help an applicant manage most of them. To receive the funds, applicants must send an email with documents proving their identity, undocumented status, inability to receive other COVID-19 federal aid, and the economic hardship COVID-19 caused them.

Once a staff member verifies the documents, a prepaid card is mailed within a day or two, according to Otero.

On average, the phone applications last 30 minutes, Otero said. Staff members guide applicants on what documents are acceptable to demonstrate their eligibility.

Otero said that one of the hardest requirements to prove is how immigrants were affected by COVID-19. For example, she said, applicants might send a photo of a shut-down workplace, but forget to show specific proof of their prior employment at the location.

The processing time might be prolonged for a variety of other reasons; for example, if an immigrant does not own an email account and needs to create one with a staff member’s guidance.

After finding that several applicants emailed documents that did not meet government standards, Otero said longer conversations and better explanations may be needed.

Aurelia Hernandez, a housekeeper in the Mission, said she must have called “3,000 times” to get one of those cards.

And then she tried a different strategy: she opted for the English line.

“Even though my English is not very good, I got through,” she said.

Though she understands people might feel frustrated, Otero said phone calls are fairer than an online application, because not every applicant has internet access.

“For some people, sending a text is so easy,” Otero said. “We have some people who don’t even know how to read and write. It’s just not that simple.”

Roberto, who started calling every morning at 8 a.m., said he felt deceived by the prospect of receiving any disaster relief.

“I feel cheated. I feel lied to. I feel robbed,” said Roberto. “I’m losing trust in these institutions.”

When Mission Local checked back with him before publication, he said that the day after our interview, he called the hotline 18 times. Finally, he heard something new: a message saying that he was next in line to speak to someone.

Roberto said with the $500, he will be able to pay his rent, the electricity bill, and wash his clothes.

He said he still stands by his idea that an online application should be available for those who cannot call nonstop.

His advice to those who cannot get through: “Persist. Think of every day like a war or a battle you must fight,” he said. “Hope doesn’t cease. The funds do.”