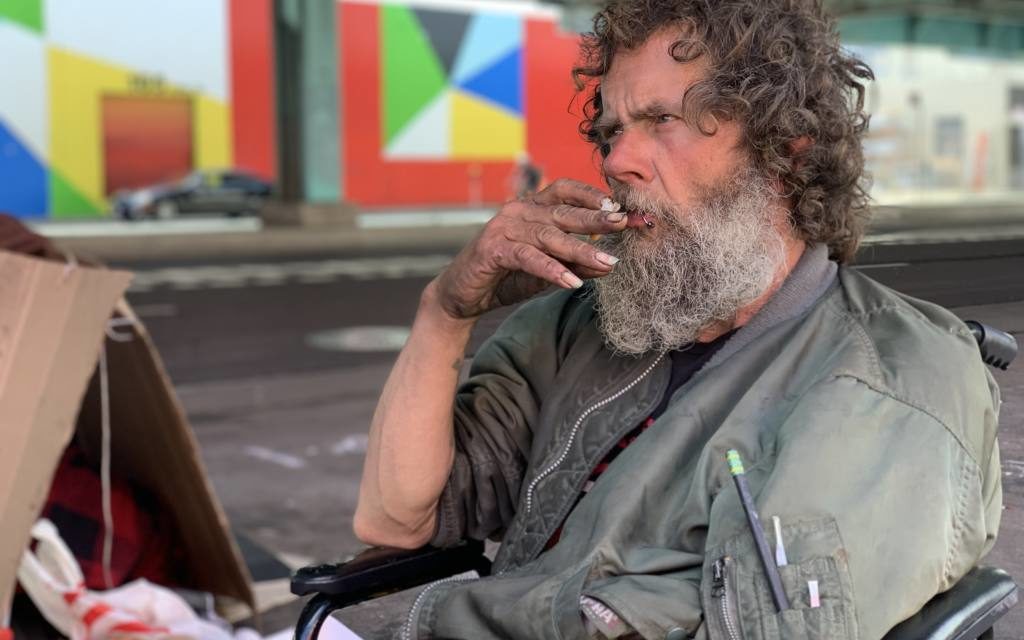 Taylor, 50, who declined to give a last name, said he doesn’t preoccupy himself with worrying about the possible end of the world. “It’s been two minutes to midnight for the last 40 years.” Photo by Joe Rivano Barros

A group of half a dozen men sat around two butane stovetops on 21st Street next to Jose Coronado Playground, enjoying leftovers from Limón, a block-and-a-half away. DuPont’s friend works at the Peruvian restaurant and provided the meal for the morning: grilled steak and onions on one burner, a golden soup on the other.

The men sat on stools and milk crates, plates and bowls at the ready, filets sizzling in the pan and a chihuahua scurrying from person to person.

No one practiced social distancing. The circle was tight-knit, everyone within six feet of one another. Friends came and went, dropping in to say hi and practicing various amounts of mitigation: Some wore masks and gloves and stayed far apart, others did not.

Those living on the street have a lot of housemates, and this group in particular would be hard-pressed to break up completely. There are often more than a dozen regulars spending time on this block between Shotwell Street and South Van Ness Avenue, chatting, drinking, listening to music. During the World Cup, a TV was set up on the sidewalk and games were live all day.

DuPont, who is a veteran of the Vietnam War and called “El Capitán” on this block for that reason, said the virus has done little to change day-to-day life for him and his unhoused neighbors. He can’t work anymore, since his construction site in South San Francisco has been closed, and he has less money as a result, which means buying items like sanitary wipes has been difficult.

His homelessness, however, overrode fears of infection.

“We’re suffering here, not just because of coronavirus, but because there’s no meaningful access to anything,” he said.

He also emphasized, as so many others living on the streets did, that were he to get the virus, he would have no qualms about his fate. 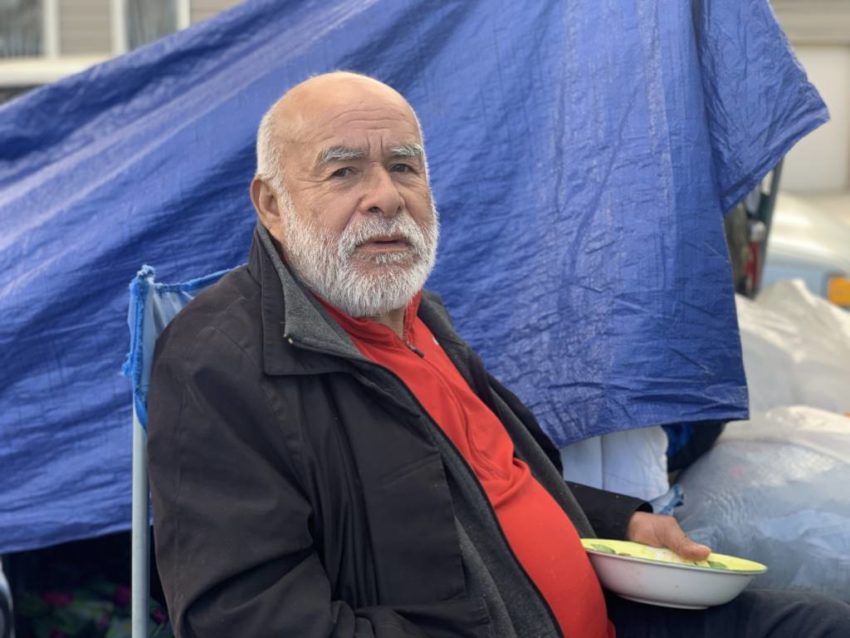 Daniel DuPont, called “El Capitán,” is a Vietnam veteran unconcerned with the possibility of dying on the streets during the pandemic. “I’m 71 years of age. I lived my life already. I’m done.” Photo by Joe Rivano Barros.

Interviews with more than a dozen people living on the streets in the Mission revealed consistent resignation about coronavirus. Food, money and shelter were foremost on people’s minds. The pandemic made living outside more difficult, but only slightly, and falling ill from the virus itself was a nebulous, secondary concern.

Sweeps, for instance, are continuing despite city assurances to the contrary — albeit in a modified, less severe form, they said. The city announced last week that it was pausing its “encampment resolutions,” when workers with the Department of Public Works direct entire encampments to move in order to wash the area, taking any abandoned belongings.

But abandoned, in this case, simply means unattended, and Angela Bolton, a 55-year-old whose husband sleeps on Division Street, said that while entire encampments are not being moved, the city is still confiscating the property of those who are not present to guard it. 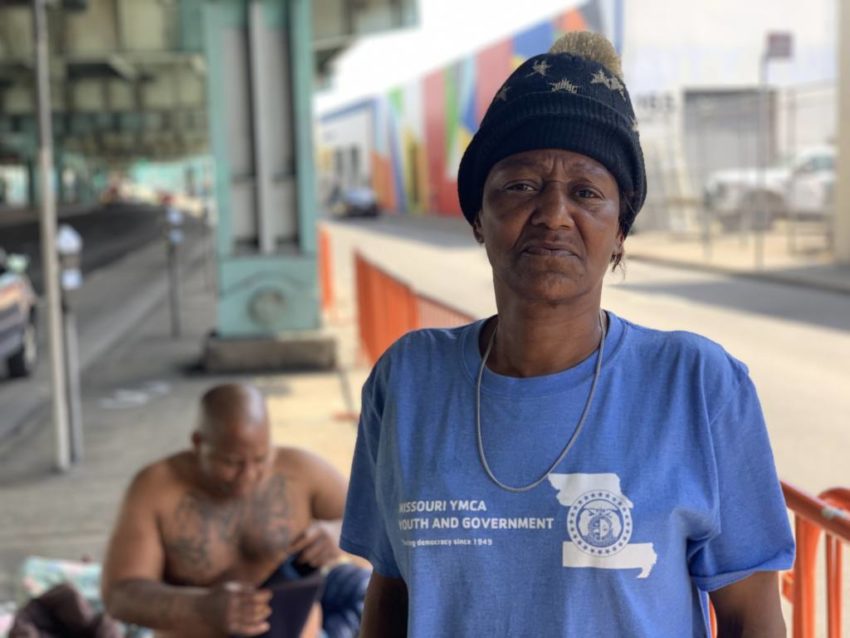 Angela Bolton, 55, stays at the Navigation Center on South Van Ness and Division, but her husband has been living on the street, waiting for a spot. They’ve seen city workers conduct sweeps early in the morning all week. Photo by Joe Rivano Barros.

Christopher Zupancic, 45, says his toiletries were taken by the city when he was downtown filling out a survey for the homeless. Bandages, hand sanitizer, disinfectant wipes, toilet paper. “All my stuff that was useful, they took that stuff.”

Food, too, is impacted. People, keeping their distance, give less food directly to those living in tents. Block-long lines form outside shops like Rainbow Grocery and Trader Joe’s. Several people said they’ve been turned away from stores or followed around by security guards when shopping.

“I can’t find dollar iced tea or dollar Gatorade anywhere,” said Taylor, a 50-year-old wheelchair user who declined to give his last name. He survives from in-person donations, he said, and those are quickly vanishing. Cigarettes, too, are in short supply. For a smoker like Taylor, that means withdrawals and panic attacks “every 45 minutes.”

“People are in such a panic,” said Mike McLee, 62, referring to long lines outside St. Martin’s and St. Anthony’s, two soup kitchens. People arrive three to four hours ahead of time, he said, making the feeding operation a more arduous task. Even getting his own check has been more difficult, since a lot of government offices that used to disburse payments have unusual or shorter hours, he said. “I’ve had difficulty getting my check.”

But when asked if he worried about his own health, he said no.

If infection from coronavirus is a distant priority for those surviving on the street, concern from government officials about its spread among the homeless community is not. Gov. Gavin Newsom announced $150 million in emergency funding to move people into shelters and either purchase or lease trailers, hotel rooms, and motel rooms for immediate housing.

In San Francisco, Mayor London Breed has committed $5 million to clean shelters, single-room occupancy hotels, and navigation centers. Trent Rhorer, the Executive Director of the Human Services Agency, will soon be in a position to offer thousands of hotel room beds for those who test positive for coronavirus but cannot isolate from others. But that has yet to happen.

Hotels throughout San Francisco, now boasting record-low occupancy, are lining up to lease their empty rooms to the city. The request for proposal from the city calls for 4,250 rooms — 3,500 for those who cannot otherwise self-isolate, like the homeless, and the rest for first responders — to be made available for a minimum of four months.  Already, some 8,500 rooms have been offered, and city supervisors want even more.

Another 2,500 beds would be opened up to ensure distancing in the city’s various shelters and to house homeless people who are elderly or vulnerable.

But San Francisco has more than 8,000 homeless people, according to the official point-in-time count, and the real number may be closer to 23,000 when calculating for those in hospitals, jails, and other facilities, as well as those who are homeless not only when the count was undertaken but during the whole year. A full 35 percent of those surveyed by the city are over 50, and 74 percent report health problems, from drug addiction to post-traumatic stress disorder. It’s 31 percent for those reporting a “chronic health problem.”

Like DuPont, who has pancreatic cancer, or Zupancic, who’s HIV-positive. Neither was concerned about their vulnerability.

Taylor, a heavy smoker, also expressed resignation about the situation. “I’m a Gen Xer. I lived through the Cold War. It’s been two minutes to midnight for the last 40 years.”

And Javier Caru, 47, said the virus did not change the fact he was stuck on the street. “Si el virus está en la calle, a donde voy yo?” If the virus is in the streets, where am I supposed to go?, he asked. 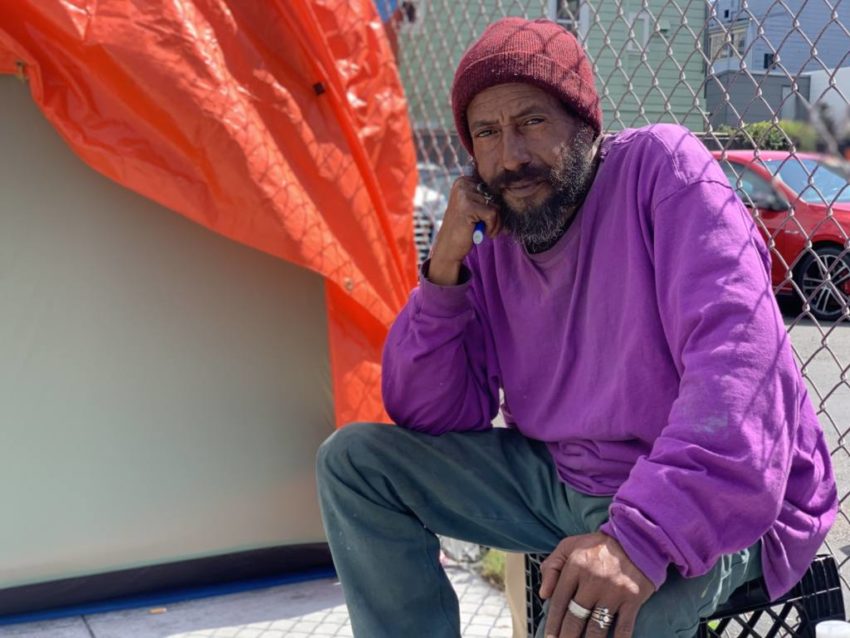 Javier Caru, 47, said he’s not concerned about the virus, since he can’t do anything about it. “Si el virus está en la calle, a donde voy yo?” Photo by Joe Rivano Barros.

Nancy Streets, 34, said the same. She has five children who stay with her mother and two brothers in Oakland. Schools there are shut down, but her kids were given a laptop by the school district and are, like so many others, working virtually. “They’re getting an education. I like that part.”

The shelter-in-place order won’t prevent her from visiting them, she said, but she won’t bring guests as she has in the past.

As to the possibility that she might be exposed, Streets was accepting, saying the situation was little different from her normal life. “I just don’t know what’s next, but that’s how it’s always been in the world.”

If you read us regularly and can, please chip in to support our reporting. Thank you.