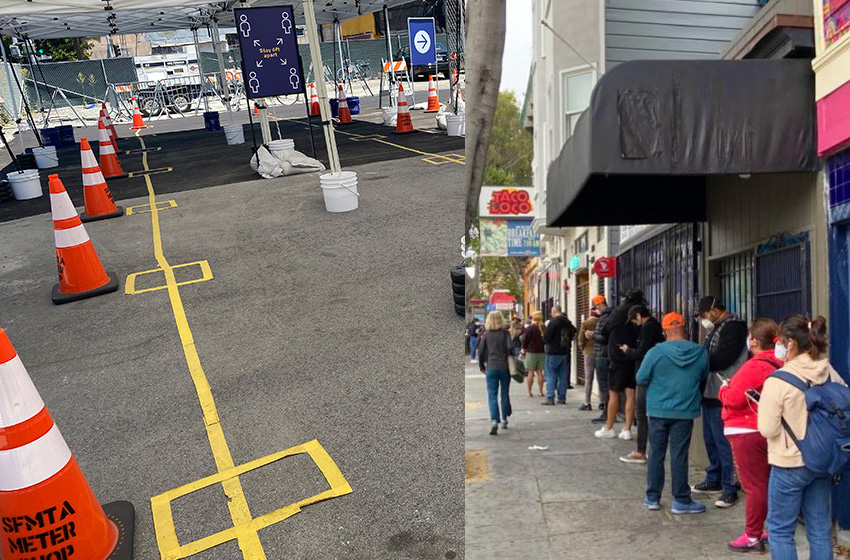 Left: Wednesday, July 22, at 1 p.m. at SOMA testing site, virtually no line. Right:July 29, The line for testing at BART station shortly after 7 a.m. stretched from the 24th Street Bart Station to Capp Street.

District 9 Supervisor Hillary Ronen will call for a hearing at Tuesday’s Board of Supervisors meeting to examine how the Department of Public Health has allocated Covid-19 resources, Santiago Lerma, Ronen’s legislative aide, said late today.

Lerma said he had not yet written the questions that Ronen wants to be addressed, but “basically it is going to be the questions raised” in Mission Local’s article illustrating the disparity in testing in the Latinx and Southeast communities.

“What is the basis for the resources already spent, the efficacy of the resources, why is it taking so long to get money to the community wellness teams?” Lerma said in reference to some of the questions the hearing might address.

Five southeast neighborhoods: the Mission, Bayview, Visitacion Valley, the Excelsior and the Outer Mission account for 41 percent of the city’s 10,640 Covid cases, yet they receive a fraction of the overall tests. Add in the Tenderloin and 50 percent of the cases are in six neighborhoods.

Compared to the approximately 25,000 residents tested in affected communities, 176,031 tests have been conducted at the city’s Embarcadero and SoMa sites, according to the Department of Public Health.

That represents 14 percent of the tests in communities representing 50 percent of the cases. Testing campaigns in the Mission have demonstrated a strong demand while the lines at places like SoMa hardly exist.

Lerma said the hearing could be held anytime between one to four weeks from the present.

Tags: Board of Supervisors • coronavirus • Covid-19