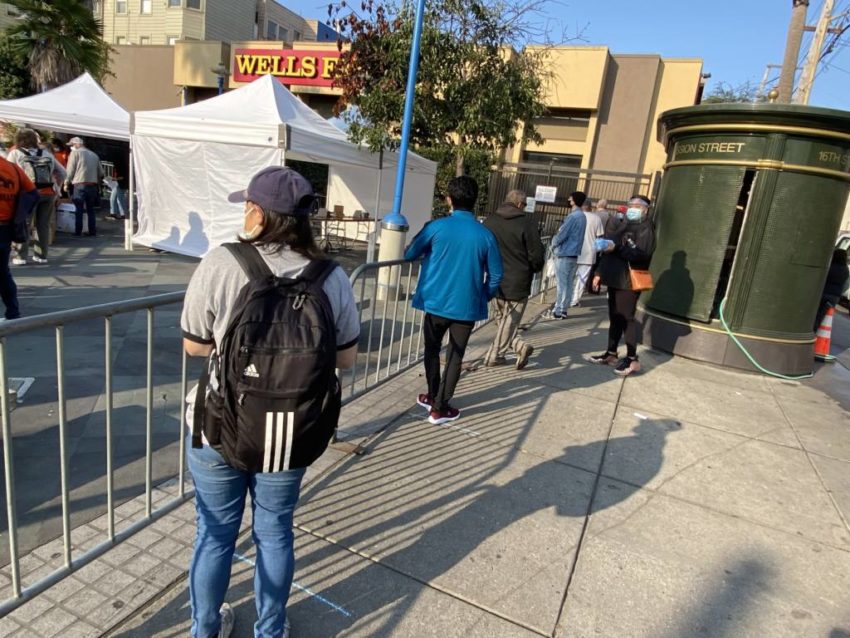 People line up at the 16th St. Mission BART Plaza to get free covid testing at the pop-up site’s opening day on Monday, Sept. 21 at 9 a.m. Photo by Annika Hom.

For the first time, pop-up Covid-19 testing sites embedded in the city’s most vulnerable neighborhoods, especially those in the southeast sector, are suggesting a low positivity rate approaching those seen in the rest of the city, preliminary data suggests.

Positivity rates at the UCSF/Latino Task Force pop-up at 16th and Street Mission have so far been between 2 and 3 percent, one of the efforts’ main organizers and a retired HIV nurse, Diane Jones, told Mission Local.

On Tuesday, the city reported a 1.62 percent positivity rate — also among some of the lowest rates to date. The city as a whole administers more than 4,100 tests weekly.

“The numbers are going down, and I think everyone was relieved,” Jones said. “But it was also a relief that numbers went down in the impacted communities.”

Last week’s results at the Excelsior Strong testing site and at the Resource Hub in the Mission echoed the findings at 16th and Mission, said Jon Jacobo, head of the Latino Task Force’s health committee, which oversees both locations.

The two sites are testing more vulnerable communities and low-income workers because they are most exposed to the coronavirus, and both revealed a 2 to 3 percent positivity rate last week.

Multiple doctors, epidemiologists and organizers have warned the public to take this data with a grain of salt, however, especially before a more in-depth analysis can be completed. In a nutshell, the findings of a few pop-up clinics may not substantiate larger trends among the more impacted communities, despite this slightly hopeful snapshot of early data.

“The overall number has been something that has been very detrimental, and I don’t want to take our vigilance away and our response until we see this is a legitimate trend,” Jacobo said.

“I am very happy about how the overall positivity rates seem to be falling within the community,” Jacobo continued. “But again, this is a quick snapshot and you [have seen cases] come back up. So I’m cautiously optimistic.”

Still, the lower positivity rates is welcome news, especially for community organizers. Members of Unidos En Salud, a partnership between UCSF and the Latino Task Force, have long advocated for increased testing within the Southeast sector after discovering the disproportionate number of cases within that area; the Mission, Sunnydale and the Bayview accounted for 31 percent of San Francisco’s COVID cases earlier this summer.

Read the Mission Local story that prompted a hearing on how the Department of Health is allocating covid resources.

It’s unclear yet why the cases are declining, but it appears to be happening across San Francisco and the state. Just last week, Gov. Gavin Newsom announced California’s lowest positivity rate since the pandemic — 2.8 percent.

Masks may have played a big part, though it is not yet confirmed. Other studies have proven masks are highly effective in reducing transmission, doctors at the site said.

Turnout at the 16th and Mission pop-up was less than expected, too; the site had extra covid tests leftover each day. On its first day, about 220 covid tests and 105 flu vaccines were administered out of the 500 covid and 300 flu vaccines available. In contrast, the 24th Street site held in late July ran out on the first day.

The second day, on Sept. 23, volunteers used up 350 tests and 170 flu vaccines; on Monday, it did about 299 covid tests, and total flu shots have not been reported yet.

Jones said that in regard to the 16th site, many people refused a test, citing they had been tested before. However, this could be dangerous if they continue to integrate into society and can contract the virus at a later point, Jones said, underscoring the need and motivation for regular tests.

So far, the city has offered no guidelines on how often someone should test. Depending on the availability of tests, doctors have recommended testing every one to three weeks.

And, from the get-go, organizers with Unidos En Salud believed that people around the 16th street corridor would be harder to reach.

Susana Rojas, a leader with Unidos En Salud, surmised that the low turnout might be because residents around this part of the Mission are not as used to seeing efforts like this and are skeptical.

“While there’s a lot of great services here, the wealth of services is usually concentrated around the 24th street corridor and that area,” Rojas said. “They’re not used to having [community resources] around all the time.”

In addition, the goal of shortening the time between test and treatment faced some obstacles.

Thanks to its partnership with the ChanZuckerberg Bio Hub, they were able to process a majority of tests within 24 hours, Jones said. This is comparable to current turnaround in the city and at Color Labs.

But creating rapid access to care needs improvement. The Right to Recover program, a crucial initiative to speedily disperse funds to those who need it most, has been out of money up until very recently. The program replaces two weeks of wages for workers who are covid positive and must quarantine, and who have no other means of financial support, to incentivize staying home and curbing the viral spread.

Last week, the mayor announced $28.5 million on Thursday to bolster efforts for the Latino community that included the $2 million for the Right to Recover that District Supervisor, as Supervisor Hillary Ronen and the Office of Economic Workforce and Development announced on Friday. That money comes from Michael Moritz and novelist Harriet Heyman, spouses heading the charity group, the Crankstart Foundation.

Still, the site at 16th and Mission managed to meet several of its goals: for example, researchers successfully rolled out an experiment using rapid tests in conjunction with the “gold-standard” PCR tests, the latter of which is primarily used for testing in the pandemic. This provides them with insight about how effective rapid-tests are in comparison to the PCR tests. For now, it is too early to tell.

A formal report from the 16th and Mission study is expected in the next two weeks.

We’ve been on top of the COVID-19 news in the Mission and the city’s most affected communities, and tip off readers like you for free. Please consider supporting our reporters and work here. Southeast sector sites cautiously report 3 percent positivity rate, approaching city’s rate for first time