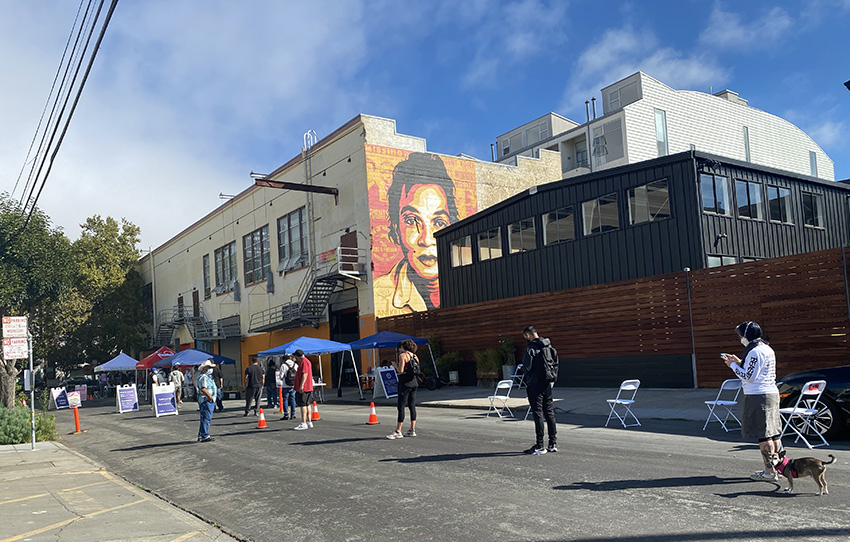 Mayor London Breed said today the city will expand its assistance to the Latinx community – a population that for the last six months has consistently represented roughly half of the city’s Covid-19 cases.

“While we have provided support for food access and financial assistance, it hasn’t been enough,” Mayor Breed said in a press release on the new funding. “We can do more to support those who have been going to work day after day and who, too often, live in crowded conditions that make it hard to isolate.”

Mission Local has written about the lack of testing in the Latinx community and the epidemiologists who said they were baffled by the lack of Covid resources devoted to the Latinx population in San Francisco. Unless the most impacted communities are treated, the whole city remains at risk of a resurgence of infection, they said.

Today, Breed appeared ready to remedy that disconnect in funding priorities with an initial $22.5 million for the Latinx community and a commitment to allocate a total of $28.5 million.

The new efforts will be directed to community groups and led by the Latino Parity and Equity Coalition, a group that operates under the Mission Economic Development Agency,  and the Latino Task Force, a group of community leaders who organized in response to the pandemic.

The money will be used on testing, contact tracing and outreach in impacted neighborhoods, as well as housing subsidies and financial assistance.  The focus will be on the Mission, Visitacion Valley, Bayview, Excelsior and the Tenderloin – the five neighborhoods represent 48 percent of the city’s cases.

“I’m excited and grateful,” said Valerie Tulier-Laiwa, who is on the executive committee of the Latino Task Force, and has been working on a citywide wellness model that she is anxious to roll out.

“I’m thrilled but confused,” said District Supervisor Hillary Ronen. “We just finished a budget process that was extremely difficult and then out of nowhere the mayor found $28 million to dedicate. … Where is that money coming from? Why didn’t we appropriate it during the budget process?”

Ronen said that from what she has been able to learn, most of the funding appears to have come from the city asking different departments to reallocate existing funds.

Ronen did know the source of the $2 million that will replenish the Right to Recover program that offers financial assistance to workers who have to quarantine. Ronen and Joaquin Torres, director of the Office of Economic and Workforce Development, secured the money from a foundation and a formal announcement will be made Friday.

The initial $2 million in Right to Recover money was distributed in July and August to some 1,500 workers. Such support is seen as key to getting workers to test and quarantine. Nevertheless, that $2 million ran out at the end of August, and workers have been unable to get financial assistance in all of September.

“If this money existed all along, it would have been nice to not stop the Right to Recover program,” Ronen said. And she worried about what will happen when the new money runs out.

UCSF researchers knew early on that the Latinx population – 15 percent of the city’s residents – was highly impacted by the pandemic and discovered in April that it was particularly vulnerable because many were front-line and essential workers who returned home to crowded living conditions – an environment where the virus thrives.

Jon Jacobo, a community activist, said that he was happy the money would be channeled to the Latinx community. “I just wish that we could have done this sooner knowing what we knew in April, but I’m looking forward to an expedited rollout.”

All through the summer, most of the city’s testing resources have gone to lower-risk populations served by SoMA and Embarcadero sites.

During the last week of August, the city tested 1,010 residents at the nine pop-ups in the highly impacted communities. Those operate only one to three days a week. The testing at the pop-ups compares to some 3,000 tests a day offered at Embarcadero and SoMa.

The funding announced today includes $7.3 million for testing, tracing and outreach in the five impacted neighborhoods. This includes $3 million for community testing hubs. It is unclear how many new pop-up hubs this will fund or if the existing pop-ups will simply extend hours and days of operation.

In addition to direct money going to testing, the mayor set aside $8.5 million for housing subsidies, direct financial assistance and eviction protection.

The full funding details are here. 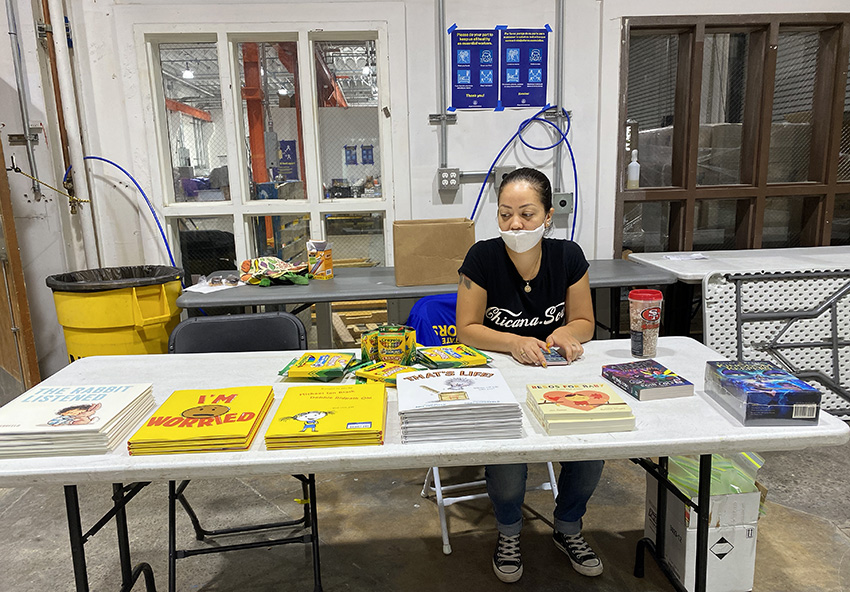 Handing out books at the Latino Hub. Photo by Lydia Chávez