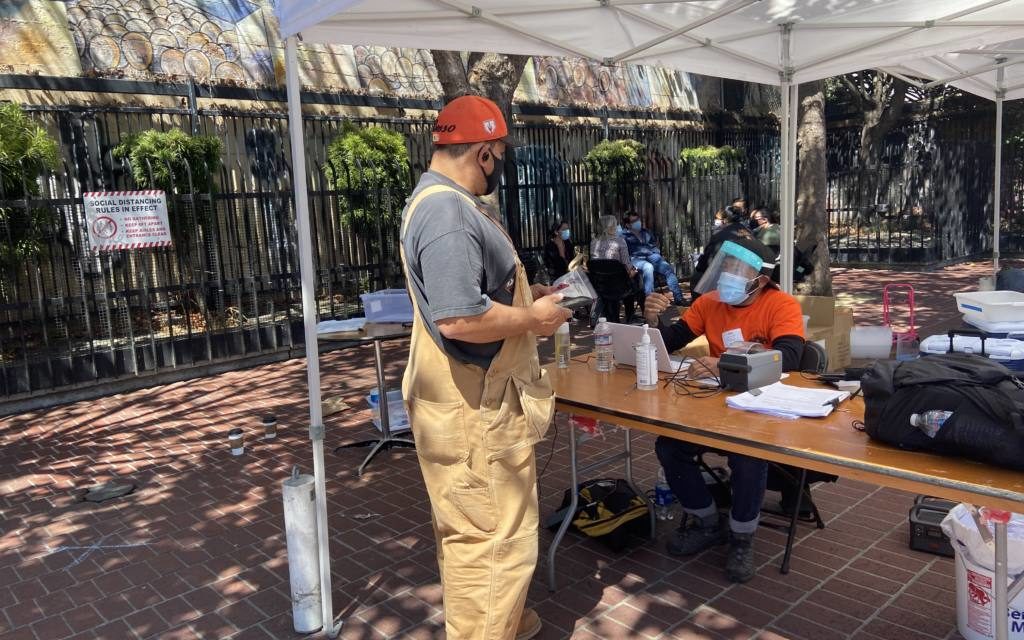 A study released today by UCSF underscored the importance of ramping up testing for Latinx residents in the Southeast sector of the city, after results showed that this demographic not only tests positive at a higher rate than the rest of San Francisco, but may pass covid-19 on to others, due to an inability to self-quarantine.

Out of 2,622 Bay Area residents tested at the 24th Street BART pop-up testing site launched a month ago, Latinx residents registered an 11 percent positive-test rate, compared to 9 percent among all participants. Both dwarf San Francisco’s overall rate, which is presently 2.6 percent, according to the Department of Public Health.

“It’s deeply personal, it’s deeply painful, and deeply frustrating, to see from April that we have not been able to get a grip on covid-19,” said Jon Jacobo, a lead organizer with the Latino Task Force, the organization that joined UCSF in leading this pilot study.

While the study has limits — for example, 92 percent of participants were symptomatic, which could well factor into the high positivity rate — the data still highlights the benefits to testing where it’s proven transmission is most likely. These results are still drastically higher than those at the Embarcadero testing site, which has only a 1 percent positive rate, said Dr. Diane Havlir, chief of the UCSF Division of HIV, Infectious Diseases and Global Medicine.

It also demonstrates how the city’s efforts to eliminate testing barriers confronting low-income, Latinx residents have not yet succeeded. Nearly half of positive cases were during the virus’s most infectious stage, meaning people had been tested too late and potentially exposed others.

Interviews between testing volunteers and people at the pop-up revealed it took an average of five days for them to be symptomatic, get tested, and shelter in place — a damning lag in testing and turnaround. By then the damage is done: covid is at its most infectious when symptoms first appear, and up to five days after, medical experts said.

Of those who rode BART or Muni that day, seven percent of test subjects came up positive.

“This virus moves so fast. We have to keep up,” Havlir said. “Essentially, the train has left the station. We need to ask — where are the delays? It’s in testing.”

But experts said that quarantining plays as much of a role in curbing the spread as testing does. Unfortunately, some people may not be able to quarantine at all.

Studies show essential workers and low-income workers are more at risk for covid, since they continue to go to work. In the results reported today,  87 percent of positive testing participants earn less than $50,000 a year and 79 percent live in an overcrowded home (with a median of six people per household).

“If you’re not symptomatic and faced with going to work and collecting your daily salary, or staying home, which of the two would you select?” Jacobo said.

Although city leaders attempted to address this with programs like the Right to Recover, which funds covid-positive workers for up to four weeks, the money will not be available until mid-September. Meanwhile, 22 percent of positive respondents said their work still denies them paid sick leave, despite calls to do so from local leaders.

“To know we can’t get them the funds in an adequate amount of time means that they are forgoing bills or responsibilities that they have,” Jacobo said. “We have to ensure this has funding and works accurately.”

The survey questions also spotlighted the lack of education about covid in vulnerable communities, Latino Task Force organizer Susana Rojas said. For example, some covid-positive residents said that they didn’t realize they exhibited symptoms. Additionally, 98 percent of those who tested positive at the 24th Street site self-reported wearing masks; the 9 percent positivity rate suggests that people may not wear them correctly.

“There are mixed messages going on in the community that masks aren’t necessary and a hoax,” Rojas said, noting that data suggests they’re effective when appropriately. “Wear them correctly and consistently.”

Jacobo added that most people remove masks when relaxing at home. In overcrowded households, this might heighten risk and transmission.

In many ways, the 24th Street pilot was successful, said Dr. Kirsten Bibbins Domingo, vice dean for population health and health equity at the UCSF. It proved that there is a need for targeted, low-barrier and regional testing and that researchers should look into areas they know little about, such as transmission on transportation. (Current data suggests that transmission on public transportation is low if riders are masked, Bibbins Domingo noted.)

“BART is a perfect example of a testing and surveillance strategy that will also look regionally,” Domingo said. About 18 percent of the participants lived in places outside of the city, like San Mateo County.

Of the 2,622 test subjects in the roughly three-week period, 93 percent who tested positive were Latinx, and 85 percent preferred communicating in Spanish.

“It’s great we have other testing facilities, but the strategy must be to come into communities where we know that the transmission is higher,” Jacobo said, mentioning places in the Southeast sector like the Bayview, Excelsior and Sunnydale.

More work remains for the city and its community groups.

“We need the resources.”

This Labor Day Weekend, the Latino Task Force and Carnaval organizers aim to test about 2,000 people for free.

We regret the errors and confusion.

We report on what matters most to the community. Please support our work now.