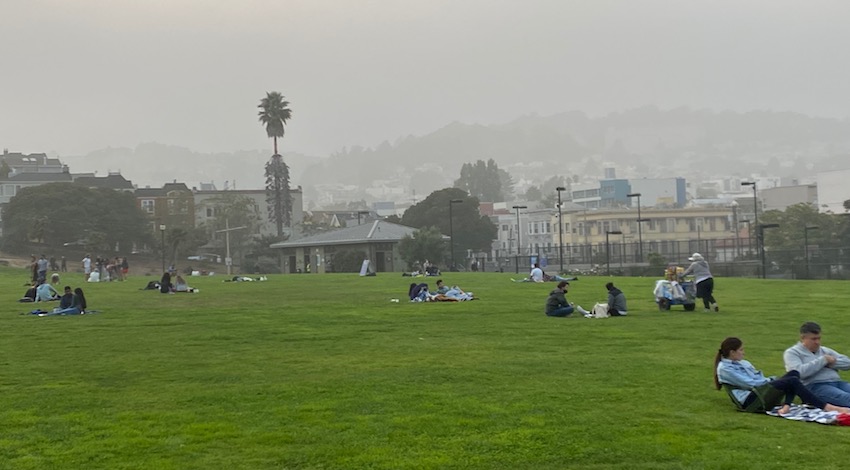 Unfortunately, the virus’ success cannot be entirely attributed to Dark Ages Donald (although he did know it was coming, and undermined any positive steps to prevent the worst from happening). Last week, The Atlantic published “America Is Trapped in a Pandemic Spiral” addressing a number of “conceptual errors” shared by officials and the public alike. With fire season upon us, try to keep in mind the five P’s through which the virus most easily spreads: people in prolonged, poorly ventilated, protection-free proximity.

Going around in circles reminds us we live in San Francisco. As Joe points out, that’s the way the City rolls.

And in Mission Local’s continuing “update” series, Hayden recalls the awesome “Time of Change” exhibit from 2010.

The virus continues to creep slowly through the City. Our model for the R number has fallen below .90 again. An ensemble of models shows California’s R number at .87

The seven-day rolling average of positive cases for the week ending September 7 ticked back up to  2.43 percent based on an average of 3346 tests collected daily.

Hospitalizations increased by 31% over the past week, putting DPH on high alert. The increase has apparently not affected capacity in a meaningful way yet. ICU shows a seven-day availability average of 37 percent for the week ending September 12. For Acute Care the figure is 29 percent. DPH wants to keep Acute Care availability higher than 15 percent and ICU higher than 20 percent.

New programs aimed at reducing the virus spread among the Latinx population or Southeastern neighborhoods generally have yet to be announced.