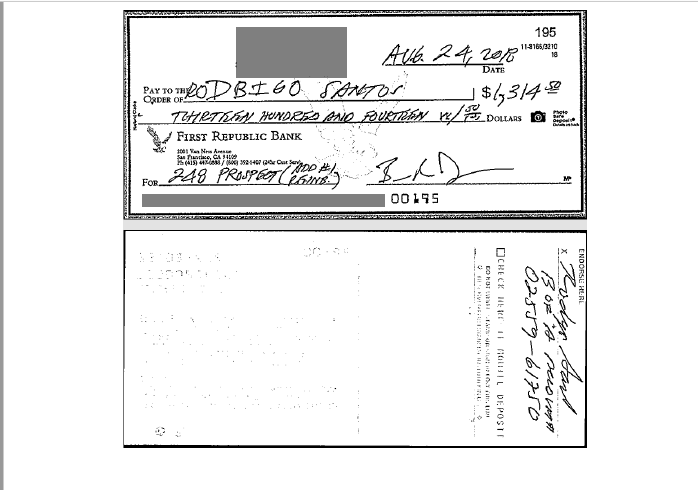 It was a few weeks ago back in August when the water, gradually then suddenly, came spurting through the brick wall in Bob Mason’s backyard.

Even before this, the 73-year-old retired computer programmer had harbored his concerns about the ongoing construction and loud, incessant drilling taking place on just the other side of that wall.

In June, after a worker intimated that the brick wall might be torn down, the engineer overseeing work on a large “storage shed” visited Mason in his backyard. The engineer assured him that the wall would not be removed. Mason’s fears were assuaged. He found the engineer to be suave, charming, and reassuring.

Little did Mason know that this smiling, elegant man had, only several weeks earlier, been arrested by the FBI and was out on $100,000 bail.

The wall has, indeed, not yet been removed. But, months after their meeting, the waterworks ensued.

The explanation workers yelled over the fence to Mason in August was that they were “testing” a new retaining wall on a large “storage shed” by pouring water — and the inundation of his yard, paradoxically, meant that everything was going great.

But this explanation, itself, does not hold water.

For one thing, while a permit to work on the “storage shed” was sought late last year, it has not been granted. So there is no permit allowing the work on that “shed” or a retaining wall — or, for that matter, much of the months-long cacophony serenading Mason and his Bernal Heights neighbors, and obscured from view beneath a flapping blue tarp.

A quick search of the Department of Building Inspection website reveals the “storage shed” abutting the brick wall was earlier described as a 300-square-foot “cottage” complete with plumbing — and was, itself, built without permitting.

Neighbors have complained through the years about people living in this “shed,” or even that it’s being flogged on Airbnb. DBI documents from 2014 describe a “hotel” being illegally run at this address with up to eight unwarranted units.

Mason didn’t know about that. But he did know that, in August, water was pooling up in his yard. He decided he’d give this charming engineer a call: “Two times in an email, he said he’d call me. He did not.” So Mason Googled the engineer’s name to find the phone number. And then Mason got nervous.

Because, when you Google Rodrigo Santos, you find interesting things. Rodrigo Santos, seen here in 2014 with his many awards for running marathons.

Rodrigo Santos did not return calls or emails for this article. Which wouldn’t be surprising even if he weren’t facing a bevy of meticulously documented charges from both the City Attorney and United States Department of Justice.

“Rodrigo was so busy that you couldn’t get your call returned,” recalls a longtime associate. “You’d show up at his office at 5:30 a.m. for a five-minute appointment.”

Rodrigo Santos amassed building permits in this city like Pete Rose racked up base hits. At any time, he could be attached to hundreds of projects.

But here’s the thing: He still is.

Sources both within and without DBI say he’s there, pulling permits damn near daily (though, it should be noted, not a permit for that shed). Despite the serious charges hanging over him, he remains an exceedingly busy man.

San Francisco is a city in which a cynic is almost always rewarded. So, perhaps the allegations against Santos — that he repeatedly implemented risky, unpermitted excavations to add whole floors to clients’ homes; drew up “secret plans” differing from those sent to the city; and even commissioned and submitted out-and-out forged documents to hoodwink building inspectors into thinking vital inspections had been taking place — aren’t a turn-off for some.

On the contrary: If the voluminous and scrupulously documented charges made on both the local and federal level are true, there is a lucrative market for this manner of “work,” which greatly augments the value of clients’ homes at a fraction of the cost — and time — of doing it legally.

And yet, both the City Attorney and feds also hit Santos with charges of check fraud/bank fraud — that is, he is charged with stealing money from his clients.

The feds accuse him of soliciting clients or others to write 261 checks to city departments or youth sports leagues over a three-year period — but instead, he deposited the roughly $478,000 into his own Bank of America account.

Santos, a licensed civil and structural engineer, is accused of the junior high Goofus-level alteration of a check made out to “DBI” to read “RoDBIgo Santos.”

When confronted by an FBI agent with these allegations in March, Santos produced invoices indicating that clients received a credit for the funds the feds, via a grand jury subpoena, discovered in Santos’ own bank account.

The FBI alleges that these invoices were, themselves, forged.

So, with all that in mind, Santos’ continued heavy workload does raise eyebrows.

But, again, a cynic is nearly always rewarded. San Francisco’s land-use system is confusing, and it’s meant to be confusing. But it’s a mistake to think players like Santos merely know it better. They do, but they also rig the proceedings so that they alone can operate expediently. And when they’re caught — and they are, and not infrequently — they know how to continue operating with near impunity. And their well-placed allies can reliably make life difficult for anyone who’d challenge this setup.

Furthermore, when you divide $478,000 by 261, you come out with a figure slightly over $1,800. So, on a case by case basis, the amount Santos is accused of stealing is trivial when compared to the money saved by skipping permitting or inspection — and, especially, when juxtaposed with the value added to a property by building an additional floor.

“In that business, you’re paying for a result,” sums up a development professional. “And Rodrigo delivered.”

Say what you will about Santos — and both the City Attorney and U.S. Attorney will have their chance. But it also says a lot about land-use in San Francisco that he’d become so indispensable. 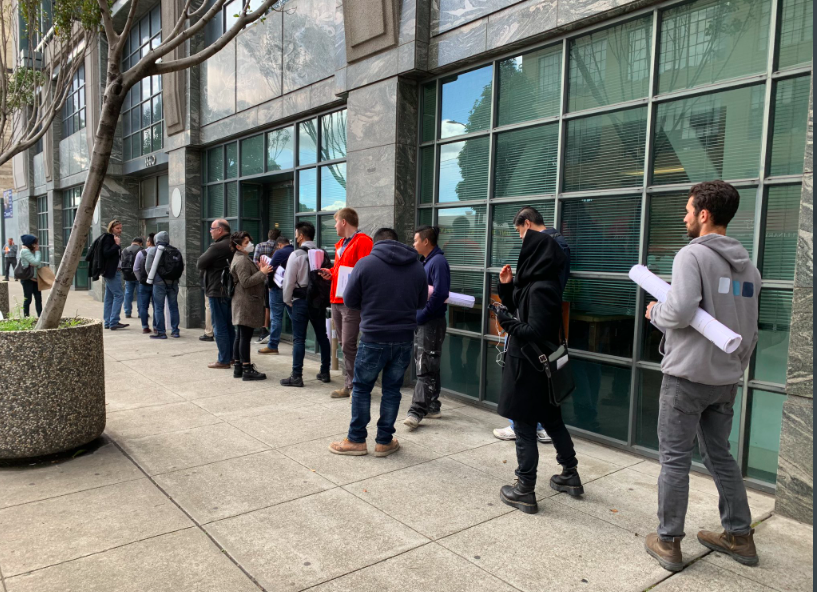 In this March 16 photo, a line of permit-seekers stretched out the door of the Department of Building Inspection and down Mission Street at the exact moment the mayor and health director were announcing the initial shelter-in-place order.

So, that’s what Bob Mason read about after water began flowing into his yard. And he was not thrilled: Among many other concerning patterns regarding Santos’ work throughout San Francisco, he is accused of undermining not only the foundations of his clients’ homes, but those of their neighbors.

Mason has, since June, been peppering the Department of Building Inspection with calls and emails. But it was only last week that a senior inspector cc’d him on an email asking a newly hired inspector to give this case a look.

“I am surprised [Santos] is allowed to carry on,” Mason wrote to the DBI this month. So are the DBI inspectors charged with looking over Santos’ shoulder.

“Upper management has told us to deal with him just as if he’s anybody else,” says one. “So we work with this guy. We allow him to sweet-talk us, even though we all know who we’re dealing with.”

DBI spokeswoman Lily Madjus notes that engineers are licensed by the state. And “we are not aware of any law that would give DBI the authority to deny a state-licensed engineer the ability to obtain permits from a public department.”

And that’s true. But it’s also true that, for nearly two decades, Administrative Bulletin No. 40 has been on DBI’s books, which urges DBI officials to refer “design professionals and contractors to the State License Boards … for possible disciplinary action when the Department of Building Inspection believes there are serious violations of State regulations.”

At risk of hyperbole, there ought to be a Bat Phone-like direct connection between DBI headquarters and those licensing boards. But, we are told, this bulletin has seldom if ever been followed. “We are honest people,” said one despondent building inspector, “but honest people are not running this place.”

That’s all too evident. Reading through the City Attorney’s suit vs. Santos and others, it’s striking how often inspectors did indeed sniff out what was going on, and take action — but work continued, regardless, and second, third, and fourth chances were proffered.

Multiple DBI sources confirmed that the City Attorney earlier this year insisted that any plans submitted by Santos now must run through an extra level of “quality control” and be vouched for by a manager. The City Attorney’s office declined to discuss this matter.

Madjus adds that DBI has “flagged several of Mr. Santos’ projects for extra scrutiny and has audited several of his projects.”

But “quality control” does not carry down to what’s actually being built — or not built — in the field. That’s a crucial detail. And DBI is not proactively and overwhelmingly sending field inspectors to begin scouring Santos’ many, many sites. As Bob Mason could inform you.

Perhaps DBI officials are worried what they might turn up. It’s impossible to decouple Santos’ accomplishments from the co-option of the agency that was supposed to be inspecting his work for the good of the public.

Rodrigo Santos is part and parcel of a corrosive system that, not unlike a shoddy excavation, has undermined the foundation of San Francisco.

This city’s powers-that-be, resting atop that foundation, have every reason to prevent it from collapsing.

As he wrote to the city, “I don’t want the brick wall to fall down on my 74-year-old wife while she is gardening.”