The great Burger War goes to the Mission Bowling Club 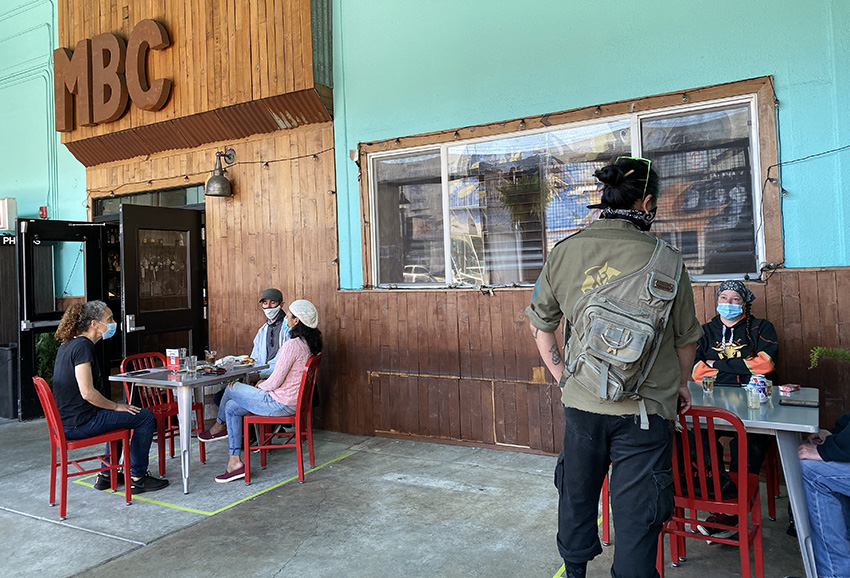 Julian, 20-something, and Mark, 70-something, are out to find the Mission’s best burger. If you have suggestions, leave a comment, or send an e-mail to Julian at julian.mark@missionlocal.com. You may remember Mark and Julian from the best fried chicken sandwich series.

I had two other burgers between eating the Mission Bowling Club burger and writing this review: Betty’s Burgers in Santa Cruz and In ‘N Out in some small town south of here.

Both were great. Both showcased the strong, almost saturated, burger culture we have along the California coast.

Neither was as good as what I had at Mission Bowling on Friday.

Honestly, I’ve never been a huge Mission Bowling Club fan. Going inside always felt like walking into a suburbanite oasis, with all the screaming children and that vague yet permeating Dave & Buster’s vibe.

So I was surprised to hear Mission Bowling had one of the best burgers in the city.

For $12, you get a thick organic beef patty on an Acme bun with Monterey jack, caramelized onions, and caper aioli. No veggies. And no useless, distracting frills like onion jam.

It’s all about the beef, which is juicy and captures the magical straight-off-the-Weber barbecue flavor of my childhood summers. Gobs of melted cheese coalesce with the caramelized onions and that’s perfectly balanced with the tangy caper aioli. It was hard to stop eating, and yet I was totally satisfied in the end.

The fries, too, were solid — medium cut and crispy — potatoes not fried to oblivion, their flavor intact.

Another big plus: The staff was exceedingly kind, despite the stress of working at a restaurant during a pandemic and being relegated to the role of mask/distancing enforcer.

And, truth be told, walking to the bathroom, past the dark and empty bowling lanes, I kind of missed the screaming children and the drunken adult birthday parties. Maybe I’ll have to play a couple rounds here if life opens back up again.

Had you been a dedicated Mission historian, Julian, you would not have been surprised to hear that Mission Bowling Club had one of the best burgers in the city.

Maybe one of the best in history.

I first heard of the “Mission Burger” back in 2009, when its creators, Anthony Myint and Danny Bowien, served it out of Duc Loc Supermarket. They intended to bring it onto the street in front of Lung Shan, where they were cooking up Mission Chinese Food.

I never saw it there, and didn’t hear of it again until 2012 when Myint, a co-founder of Mission Street Food and Commonwealth, in addition to Mission Chinese, announced the Mission Burger would be coming to the Mission Bowling Club.

Friends raved about it but, for some reason, I never tried one.

Was I out of my burger mind?

This burger, the Mission Burger at Mission Bowling Club, is out of this world. 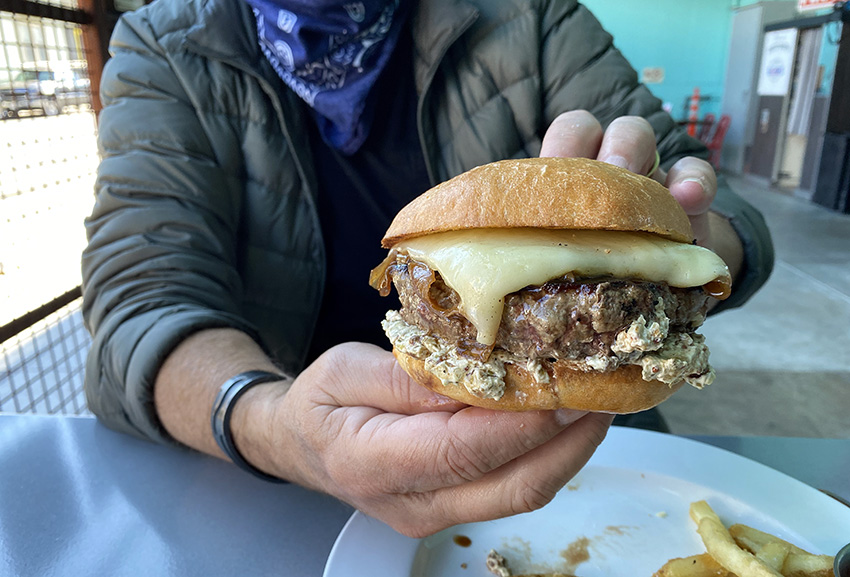 The Mission Burger at the Mission Bowling Club. Photo by Lydia Chávez.

First, I have to tell you that if you want a burger there, you have to reserve it. Due to staff cutbacks and limited supplies, there are only so many burgers to go around.

The Mission Burger remains what it was eight years ago: ground beef, jack cheese, caramelized onion and caper aioli on an Acme bun.

“Ground beef” is an understatement.  The beef is listed as “cream co. organic beef.” Back in the day it was known as an “aged and granulated patty.” Whatever you call it, the thing is one big hunk of beef.  More than the double burgers I’ve had recently.

Size, yes, but the beef’s got taste, too. Not specially seasoned, but unmistakable. That is, unmistakably beefy. I ordered medium rare, and got exactly that. Which meant not only big, not only tasty, but juicy.

Probably because I was raised by a pack of wild carnivores, I’ve never been one to ornament a burger with anything more than a little ketchup. But because this was my first authentic Mission Burger, and because I would be self-consciously eating “history,” I decided to give it all a try – the whole shebang.

First of all, the caper aioli. What? The one thing I hate about the West Coast is the insistence on slathering mayo on a burger. Aioli, which, in my Midwest imagination was no different than mayo, likewise would undermine the meat.

Not this time. Not the “caper aioli.” Savory and, yes, tangy, it was the perfect partner. It deferred without being dominated. It added to the experience without trying to show off.

And the caramelized onions also played their supporting role with panache. A little sweet. Just a hint, not to distract the taste buds, but to inspire them to plunge deeper into the sandwich.

With so much happening between the beef, aioli and onions, I lost track of the jack cheese. Yes, I knew it was there, like a bass in the background, but it never took flight. The durable bun held its own, remaining a quiet but dignified presence until almost the end, when the tide of beef juices finally collapsed it to a doughy mess.

And the fries, which can be a meal themselves, are double fried! I haven’t had fries this good since my days in Westminster. Crispy on the outside, creamy on the inside, they assumed an air of French fry royalty.

And the price today?

I’m going back for another tomorrow.