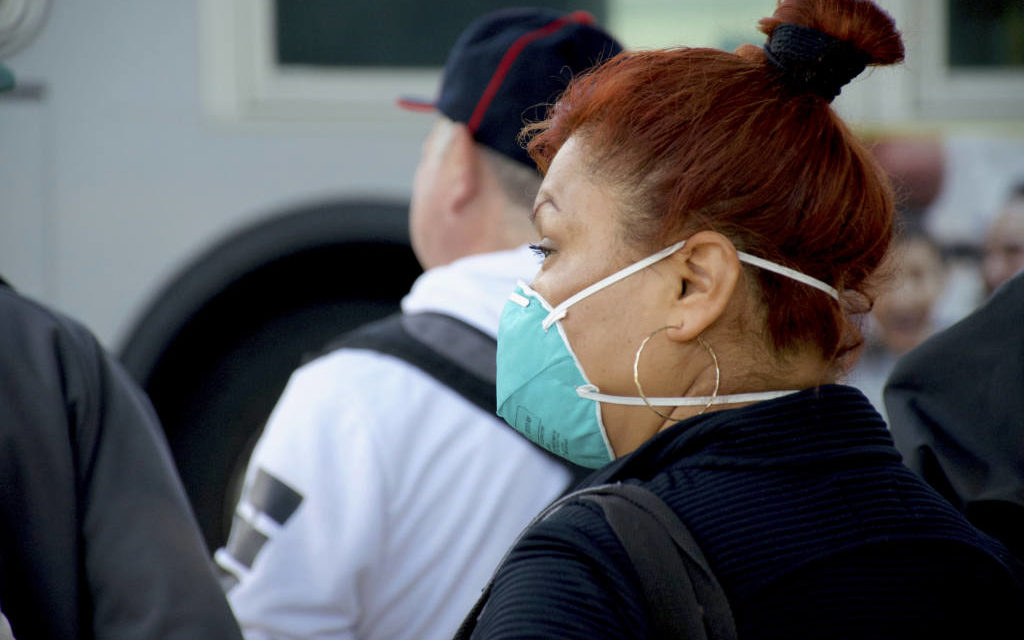 And that’s all. These two statistics, which could be shouted out a window, are the extent of the data publicly disclosed and readily available on the city’s website.

The Bay Area region has won praise for its proactive steps to shelter-in-place and take seriously the world-altering potential of the COVID-19 pandemic. Six counties jointly issued sweeping health orders days and weeks before other municipalities and states. Thousands of lives may have been saved by this forward-thinking action.

But with the data San Francisco publicly discloses, no one can truly know if these measures are working. Are we winning the war? Are we flattening the curve? It’s impossible to say with the numbers on hand; San Francisco omits the data you’d most want to know.

In this we are something of an outlier. While the shelter-in-place order carries collectively across multiple Bay Area counties, the individual counties have taken a balkanized approach to data reporting. As such, Solano, Sonoma and Santa Clara Counties in particular report far, far more information than does San Francisco — including key measures such as hospitalization rates, hospital capacity, COVID-19 tests administered, and many other vital data points. 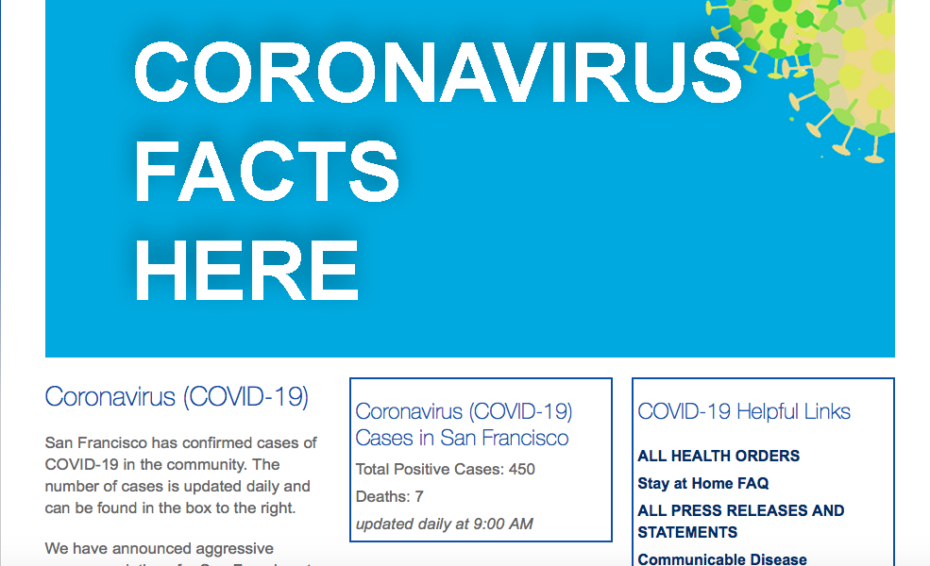 San Francisco’s Department of Public Health offers daily updates on the number of confirmed COVID-19 cases and deaths … and that’s it.

“To have meaningful data, we need to know how many people are infected, how many are ill, how many are so ill they must be hospitalized, and how many of those people require ICU care,” says Dr. John Swartzberg, a clinical professor emeritus at UC Berkeley and UCSF specializing in infectious diseases.

San Francisco discloses few of those measures — and listing the number of confirmed cases in this or any city is only so useful, considering the ongoing national fiasco regarding spotty testing.

“We have a poor idea of how many are infected because we are not doing sufficient testing,” Swartzberg continues. “We have no idea how many people are ill but not hospitalized with SARS-CoV-2.”

Health policies aren’t Peter Khoury’s stock in trade. But good data is. The Mission District data scientist has applied his expertise to crunching every number being reported by each Bay Area county.

In San Francisco, that’s not really possible. There’s simply not enough data being disclosed to come up with any meaningful analysis. “You cannot know how San Francisco is doing,” he says. “And there are vulnerable populations.”

Anticipated outbreaks at Laguna Honda Hospital and among the city’s homeless population will likely soon drive our number higher — and, with the meager data this county reports, it’s hard to gauge if or when we’ll outstrip the capacity of our health system.

Khoury critiqued the data presentations from each Bay Area county — an independent and parallel write-up to one published by Berkeleyside.

Khoury (and Berkeleyside) rank San Francisco toward the bottom of the barrel. 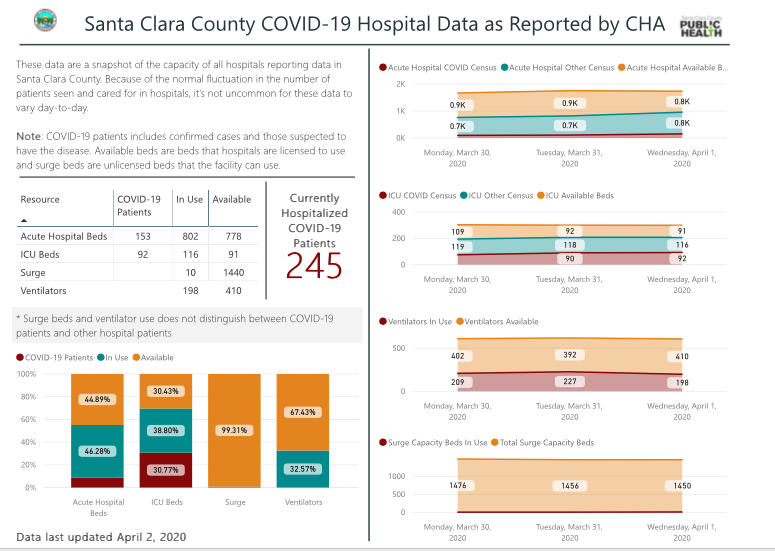 Santa Clara discloses this data. And since it also discloses its hospital capacity (and ICU capacity), Khoury could plot the day the county’s sick patients would figure to overwhelm its ability to care for them.

In fact, the news site San Jose Inside last week reported on the abrupt disappearance of this vital data — and it has since reappeared. Informed of this, Khoury quickly checked Santa Clara’s webpage and gave a shout of joy. “This is good! This is awesome!”

Based on a graph he produced last week — and barring intervention — Santa Clara County should’ve had some 353 people hospitalized by by now. But the present Santa Clara numbers show 245 — a sizable deviation downward off the projected curve and an indication that shelter-in-place measures are working.

“They have put off their surge. It’s still up — but we are losing by less,” Khoury says. “The flattening is working. Getting this information consistently, across the Bay Area, is incredibly important.”

In Solano County, Khoury continues, not only is all this data presented, so are case-by-case breakdowns by age. That way, we know that roughly half of people over age 65 diagnosed with COVID-19 have been hospitalized — but only one-fifth of those in the younger age group. This data is evolving and allows people to personally grasp what this pandemic means for them, their children, or their parents.

Mission Local’s messages to the San Francisco Department of Public Health about the data it chooses to disclose — and not disclose — have not been returned. But a source familiar with the department and its practices and protocols tells us that “the DPH 100 percent has this data; they’re looking at it every day, they have it organized in spreadsheets, they can not not have been doing that.”

So why sit on the data? Our inside source speculated it might simply be because “they don’t value putting it out.” They also fell upon an explanation other experts in the field came to: If the curve is flattening, even a little, there’s a fear that positive news will lead to complacency.

“I think public health officials in California want to make sure people keep their heads down and continue following all these social distancing measures,” said Dr. Jake Scott, an infectious disease physician and assistant clinical professor at Stanford University’s School of Medicine.

“I get a sense that public health officials don’t want to give too much in the way of good news. They don’t want people slacking off.”

That’s one way of looking at things. But failure to disclose pertinent data also breeds distrust. It also may harm coordinated efforts. To wit, San Francisco General Hospital and UC San Francisco have made efforts at transparency by disclosing patients in ICUs and other pertinent information — while California Pacific Medical Centers refuse to disclose totals of COVID-19 patients, patients in ICUs, or patients on ventilators.

“Out of respect for patient and employee privacy we are not able to disclose the number of positive COVID-19 patients in our facilities or under our care,” a spokeswoman e-mailed us. “Even in times of emergency HIPAA still applies and it is our duty to protect patient, staff and clinician privacy.”

Considering San Francisco General and UCSF’s positions, this is confounding. And, possibly, detrimental to coordinated efforts.

“Making data inconsistent hampers an understanding,” Khoury says. “Having consistent information across our region matters; that was one of the lessons from Italy, too.”

“Without good data,” adds Swartzberg, “you can imagine how difficult it is to formulate solid health policies.”

Loi Almeron and Julian Mark contributed reporting to this article.

Keep Mission Local on the ground. Support us today.