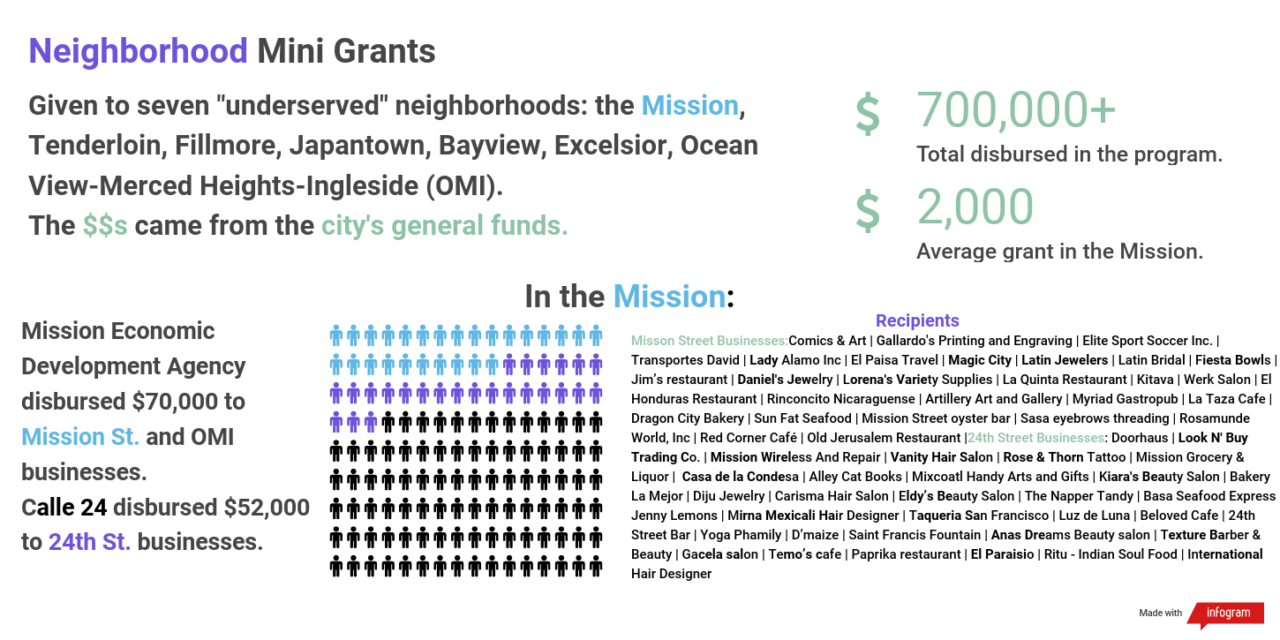 Elias’s store, La Mejor Bakery on 24th Street, is famed for its coffee and conchitas. Since the pandemic, sales have plummeted to less than half of what they used to be, prompting Elias to apply for a neighborhood mini grant.

For Elias, it did feel like a gift. The Neighborhood Mini Grant Program she applied to uses a lottery process so, in a way, she lucked out.

The program disbursed $700,000 in total for businesses in seven underserved neighborhoods including the Mission. It’s a birthday present that may give recipients like her temporary relief, but the question remains: are the grants enough to help businesses ultimately survive a pandemic with no end in sight?

Already, the rent for La Mejor ate up $500 of Elias’s check. She’s debating how to spend the rest — maybe divvy it up as bonuses for employees, or pay off her coffee bills — but the unprecedented profit loss looms. Maybe she should save the rest, she said.

Elias said 80 percent of her regular customers are gone. La Mejor attracts elderly folk who are more at risk, and school teachers and students who no longer stop by, ever since online instruction began.

“I want to save the rest for emergencies, for something like this,” Elias said.

Diana Caminos, the owner and sole employee of Diju Jewelry on 24th Street, similarly relied on a $2,000 neighborhood grant to help her through the pandemic so far. The jewelry shop, which has called the Mission home for 12 years, had to close from March 16 to May 18 since it was a non-essential business, Caminos said.

Caminos welcomed the grant, which she spent on rent and other bills.

“Of course, this is a great help for me,” Caminos said. “It’s been really hard for all the small businesses that can’t operate every day. Fortunately, [the city and these organizations] continue to support us.”

Currently reopened, Caminos estimated her revenue has dropped by more than 40 percent.

“I have to survive,” Caminos said in Spanish. She said won’t allow the thought of closing down to enter her mind. “I don’t want to shut down — I just can’t. I have to fight. I have to keep working.”

Other Mission businesses are holding on, thanks to emergency city relief programs, too.

The Resiliency Fund, which opened its first phase in March, gave a total of $1 million in grants of up to $10,000 to 128 San Francisco businesses that employed five or fewer people.

Applicants had to prove they earned less than $2.5 million annually in gross sales, and have lost at least 25 percent of revenue or closed since January 2020 due to the pandemic.

The Resiliency Fund operated as a lottery program with a twist: half the grants were reserved for businesses at least five years old. These were distributed with the help of the Northeast Community Federal Credit Union.

In the first phase, about 2,100 businesses applied. Businesses that weren’t chosen the first time around were automatically enrolled in the second phase of the grant program, which will award $1.5 million. There are about 4,100 total applicants for the second phase.

Alba Guerra, the owner of Sunrise Restaurant on 24th Street, qualified for one of the Resiliency grants and worked closely with an employee from the city’s Office of Economic and Workforce Development  to fill out an application.

Guerra said the Salvadoran eatery used to bring in nearly $7,000 a week before the pandemic. Now she’s lucky to crack $1,000, and she told Mission Local that she’s unsure if the 15-year-old establishment will make it through.

“You have no idea how much the pandemic has affected my restaurant,” Guerra groaned.

To stay afloat while Sunrise was closed in April, Guerra applied to numerous relief programs and was selected for two engineered in San Francisco: SF New Deal, a nonprofit with a new project that pays restaurants to provide meals for COVID-19 patients, and the city’s Resiliency Fund.

The Resiliency Fund awarded Guerra $7,500, money that paid off old bills and bought the necessary equipment to make breakfast for SF New Deal. The latter gave her income that varied between several hundred and a thousand dollars a week.

Yet Guerra has not used any of the money to pay off her biggest financial concern — the $7,800 monthly rent. She hasn’t paid rent since April and dreads the day the business eviction moratorium expires on August 15. But Guerra said her landlord has already been demanding full payment.

In the past, Sunrise relied on GoFundMe campaigns and a few years ago the Office of Economic and Workforce Development gave Sunrise a SF Shine business grant of $150,000 to make improvements to her restaurant.

Still, in this pandemic, Guerrera’s rent dwarfs what little savings she had. “With sales of $1,000 a week, I am not able to pay rent,” Guerra said. “If there’s someone who can help me, I’m always looking for help.”

“Businesses might be able to survive if they are able to also adjust their business model, use technology to increase their presence online,” Rodriguez said. “That won’t solve everything, but it will help.”

If you would like to support the journalism we produce at Mission Local, do it here.