Demand at the Mission’s COVID-19 mobile testing site is strong, but SF Department of Public Health lags in providing tests and other supplies 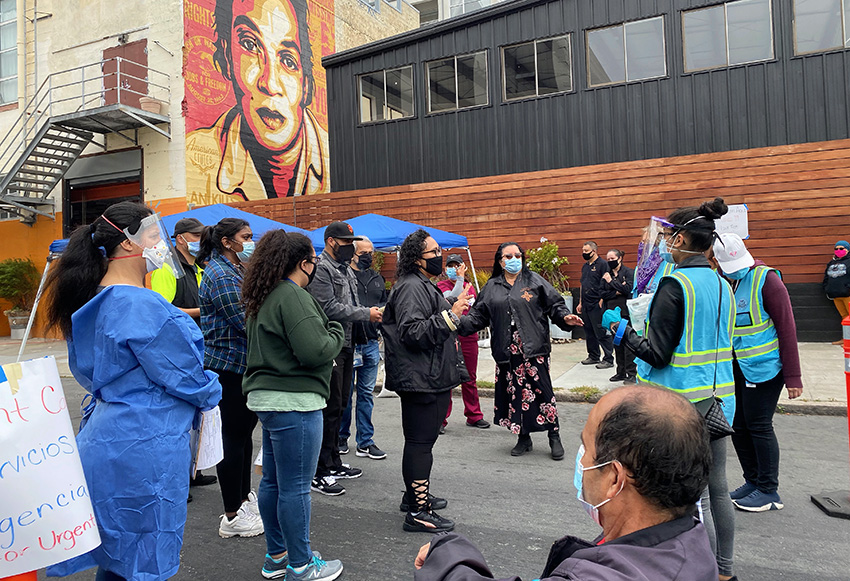 The Latino Task Force leaders – Jon Jacobo in the cap, Susana Rojas and Tulier-Laiwa in the front – briefing volunteers and workers on testing protocol at the Thursday mobile site. Photo by Lydia Chávez, July 16

The Latino Task Force’s new mobile testing site at 701 Alabama St. entered its second week today with more than 200 people in line by 10 a.m., a sign that the 300 tests it managed to secure from the Department of Public Health would be insufficient.

The Department of Health told the Latino Task Force Wednesday that it would only be getting 100 tests today, not nearly enough to meet demand at the mobile testing site. But an 11th hour intervention by task force leaders secured the increase, according to several people.

The task force, however, did not manage to get tents, chairs, traffic cones and poster boards for signs from the Department of Health. All of that had to be purchased or rented by task force members.

“The Emergency Operations Center created this mess,” said Valerie Tulier-Laiwa who, along with Susana Rojas and others, was at the mobile testing site early this morning organizing volunteers, city workers and the Department of Health’s mobile team. It was clear they were determined to clean up the mess and run a smooth operation for the immigrants and other residents who waited in a line of more than 200 people that swung east on 20th Street and down Florida Street.

Already, Tulier-Laiwa had visited Office Mart on Wednesday evening to buy supplies for the poster boards directing people to different lines. Roberto Hernandez, her colleague on the task force, rented the tents, chairs and traffic cones. If only the city had prevented parking on Alabama Street, Tulier-Laiwa said.

It’s unclear why such testing glitches remain. The Department of Health’s own data has long demonstrated that the Latinx population has been disproportionately impacted by COVID-19, comprising 15 percent of the city’s population and half of its COVID cases. And during Wednesday’s press conference, Dr. Grant Colfax, the director of Public Health, noted that the recent surge had come from gatherings and increased rates of infection among essential workers.

“We could test 1,000 people,” Tulier-Laiwa said Thursday morning. She did not have an answer for why they had to lobby for even 300 tests. The city has yet to reach its daily testing capacity of 5,800.

The Department of Health has yet to respond to our questions. When it does, we will update this post.

Jon Jacobo, who heads the health committee for the Latino Task Force, said that it was a case of the “left hand not talking to the right hand.” Jacobo said he works with two people from the health department, who understand the situation. The bottleneck, he surmised, comes further up the ladder at the department of health.

Thursday’s operation offered yet more evidence that the mobile testing site at 701 Alabama St. offers a ready place for the department of health to reach immigrant workers. Those at the front of the line had been there since 6:30 a.m. Some had been sent by employers; others had heard about the testing when visiting the food pantry. Nearly all were monolingual Spanish speakers. Many were essential workers in construction and food service — exactly the residents and workers who are getting the virus, according to a study done by UCSF in collaboration with the Latino task force.

Alvin Vallejo, a DPH nurse on the field testing team, said “It is a lot more than at other pop-ups.”

Read: The Latino Task Force emerges to take on COVID-19

Abel and Rolando, who work in construction, said their company had sent them to take the test. When asked if their company would offer support should they test positive, Abel smiled and said, “probably not.”

Cesar, who works for a cleaning company, said he wanted to make sure he was clear so that he doesn’t bring the virus home. His wife, who works for the same employer, would be coming next week, he said.

A 42-year-old woman who lives with her husband and five others said she came to get tested because she knows there is a surge. “I am the one who goes in and out to get groceries and then there are some who work, so I want to know that I don’t have it,” she said, adding that it is the first time she will be tested.

The effort to encourage testing in the immigrant community has taken time and outreach. Early on, too many workers feared losing their jobs and income if they tested positive. But, if the mobile testing line on Thursday morning is any indication, the outreach during the UCSF/Latino Task Force testing study in April and the continued outreach at the Alabama Hub seem to have helped.

Read: As SF gets closer to reaching testing goals, those who work in vulnerable communities say it is not nearly enough

Still, more needs to be done. The Department of Health’s website on testing, promises a multilingual experience but quickly switches back to English after the first link, so that any monolingual Spanish speaker has an array of possible sites, but no guidance in Spanish on what any of it means.

And on Alabama Street on Thursday, they did not have enough tests. By the end of the day, the task force had to turn away 30 to 50 people from the exact population the Health Department wants to test.