At La Cocina, COVID-19 changed everything — except its baked-in resiliency 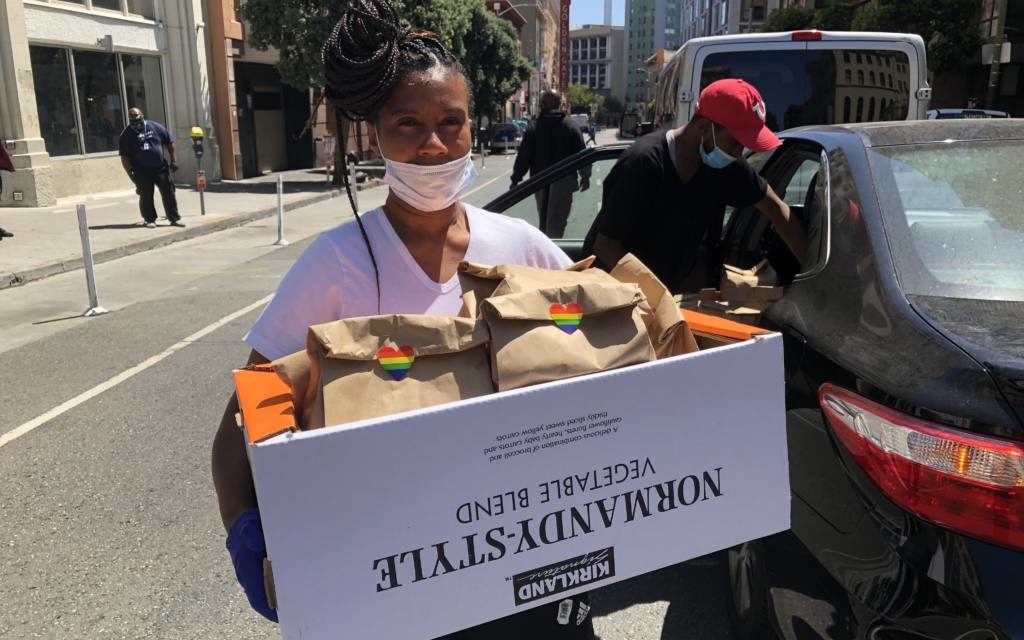 Spring at La Cocina, a nonprofit incubator for low-income food entrepreneurs, means entrepreneurs ironing out the details of business dreams: how to price menu items, scale up recipes for large batches, and design their ideal restaurants. It’s a hard, creative, and exhilarating process, but getting a spot in La Cocina’s program means the immigrant or minority entrepreneur is likely to end up with a successful business.

A new class of seven had only started in January and some 27 other entrepreneurs were at different stages in their projects.

And then the virus happened. The impact was immediate: Brick and mortars closed their doors, catering opportunities ceased. “All of that went away,” said Consuelo Reyes Lopez, who works at La Cocina.

In the more than three months since that day, La Cocina – and its fledgling entrepreneurs and graduates – have had to reinvent themselves. For La Cocina that’s been an exercise of fundraising and figuring out how to support their large community of graduates. For the graduates, it has meant re-inventing ideas, fighting to stay afloat and rethinking their role in the crisis.

The 15-year-old organization first jumped into fundraising action. It also stopped charging fees for the use of their kitchen facilities, adjusted the schedule for social-distanced operations, and took advantage of a basic human need – food.

“We all need to eat right now,” said Geetika Agrawal, La Cocina’s program director. Agrawal and her colleagues organized a rotating group of their entrepreneurs to make frozen and fresh food to fill $100 boxes. They sell 100 to 200 or so boxes a week and the proceeds go directly to the entrepreneurs.

Their fundraising for an emergency relief fund went well enough to allow for about $11,000 stipends to most of their graduate staff has been assisting graduates with loan applications, rental agreements, and other issues.

All of this has helped, but it’s the enterprising mindset of the entrepreneurs that has made a difference.

“Our entrepreneurs are a group of survivors,” said Blake Kutner, La Cocina’s culinary manager. “They’re immigrant, and women of color, and they all came in low-income into our program.”

“Like everything else, they’ve always found their way,” said Kutner.

Fifteen years ago, Maldonado’s mother began selling tamales on Mission Street, making enough to get by from sales to nonprofits and her daughter’s school district. “We realized she had a really big following,” said Maldonado. “But we needed some guidance, and some support as well, on how to formalize our business.”

They joined La Cocina two years ago. When the pandemic hit, they were planning to relocate from La Guerrera’s Kitchen in Fruitvale to another location in Oakland.

That took a backseat to the pandemic and the immediate challenge of surviving. Maldonado and her mother quickly worked out an arrangement with a nearby brewery to make and package take out orders in the brewery’s kitchen.

Pre-COVID, Tiffany Carter, another La Cocina graduate, was moving upward. Her three-year-old business, Boug Cali specializing in Creole cuisine had snagged a food kiosk in the Chase Arena and was set to add another kiosk at La Cocina’s Tenderloin food hall project. Then everything stopped, she said. “I didn’t know what to expect, I didn’t know what was going on,” said Carter.

She pressed pause for two weeks. She didn’t know what to think, and still doesn’t, but it was La Cocina that propelled her back in the kitchen with their food box program. “That was my first opportunity to get back to work,” she said.

She found further sustenance in the Tenderloin community she had gotten to know through the food hall project. Soon, she had short term contracts to deliver meals to organizations in the neighborhood, such as the San Francisco AIDS Foundation and Larkin Street Youth Services. On average, she’s delivering meals to 300 people weekly at $10 a meal, she said.

For another graduate, Luis Estrada, maintaining the nearly five-year-old brick and mortar location for D’Maize on 24th Street has been his biggest worry. 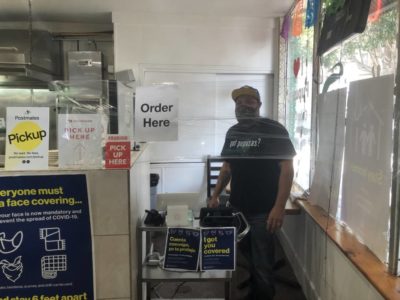 Initially, he closed up, but re-opened in May with funding from a Payroll Protection Package.

But, “unfortunately, this is a very limited fund to use,” said Estrada. “It’s mostly for employees and some utilities or expenses.”

La Cocina came to his aid with funding, he’s one of the entrepreneurs contributing to their food boxes with his pupusas.

Giving back is a common trait in the La Cocina entrepreneurs. Sometimes doing so also brings in a bit of cash, but for some, the COVID experience has made them think bigger.

Soon after the crisis, Maldonado teamed up with Mission Meals, a volunteer-based collective providing cooked meals as well as groceries to food-insecure households in San Francisco and Oakland.

Maldonado liked the transparency of their model, which primarily uses community donations via Venmo., Every week, Maldonado and her mother have been making about 60 to 70 tamales a week for 10 to 15 families in Oakland.

Even when they make a little extra food to give to these families, they don’t accept more than $150 a week from Mission Meals. The money isn’t that important to them, said Maldonado. They’ve been able to sustain themselves well enough through regular takeout orders.

“This is really pushing us to really think about how can we create sustainable food access to communities who don’t normally have access to that,” she said.

Going forward, Agrawal says La Cocina will continue to support their current pool of entrepreneurs and their graduates through the pandemic and beyond. She imagines formalizing and growing the organization’s graduate support.

“I just feel like the core thing that we do at La Cocina is really cultivating entrepreneurs, creating opportunities and really fighting for them to have an equal shot at the market,” said Agrawal, “because we know that once they’re out there in people’s mouths, and in people’s hands, that the product will blow people away.”

“And it’s just now finding new ways to do that,” she said.

As for the seven new entrepreneurs in the now suspended program, it’s unclear what the future curriculum will offer. “What that will look like will completely change and shift,” once they are able to restart the program, said Lopez.

This story was supported by the Pulitzer Center for Crisis Reporting.  To support our ongoing coverage, please donate here.