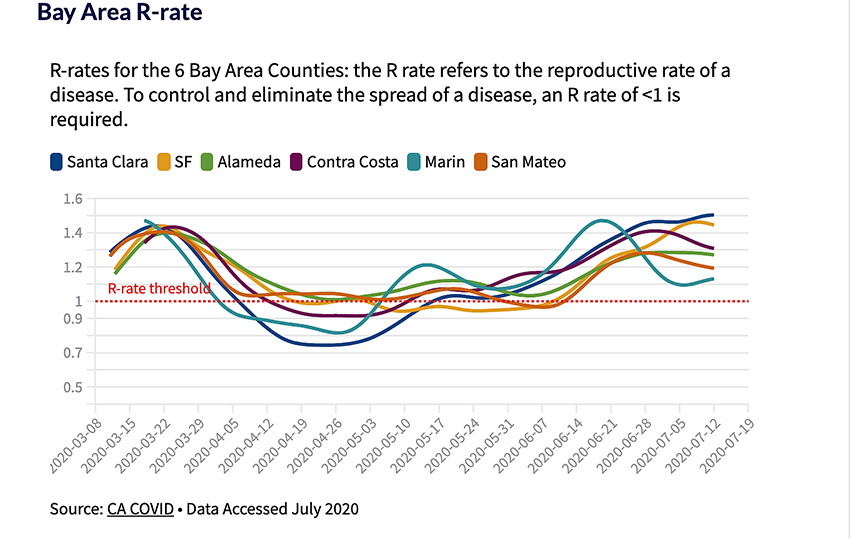 The San Francisco seven-day average of new cases per 100,000 residents for the week ending July 11 was 7.7, still in the red zone.

The San Francisco R number fell slightly in recent days to 1.45. Still not good. From the standpoint of the R number, nowhere in the Bay Area, or California looks very good. Remember the R number is a time fluid estimate of the average number of cases infected by a given case over the course of that individual’s disease progression. The SF Health Department uses a slightly more optimistic number of 1.3 today, but speaking today at a press conference Dr. Grant Colfax, the director of public health, said this could mean a rollback of the opening if the city fails to curb the surge.

Though four patients were discharged from ICU, hospitalizations continue to rise to 92 total cases as of July 13, including transfers. The rate of change in COVID hospitalizations (excluding transfers) for the week ending July 13 was 33 percent, well inside the high-alert red zone. Hospital capacity still good, though available PPE remains well below where it should be. We will try to find out why that problem persists.

As of yesterday, there were 699 positive cases reported in the Mission.

Stop the Presses! Dr. Robert Redfield, Director of the CDC, announced yesterday that if everyone wore a mask, the country would have the virus “under control” within two months. Wow! The financial giant, Goldman Sachs, not known for its epidemiological work, also weighed in on the mask issue. A national masking mandate says the bank, could prevent another lockdown, saving the country $1 trillion. We all know Dark Ages Donny doesn’t follow The Science, but will he follow The Money? Does his recent masking presage a forthcoming national masking mandate? Wouldn’t that turn the political world upside down!