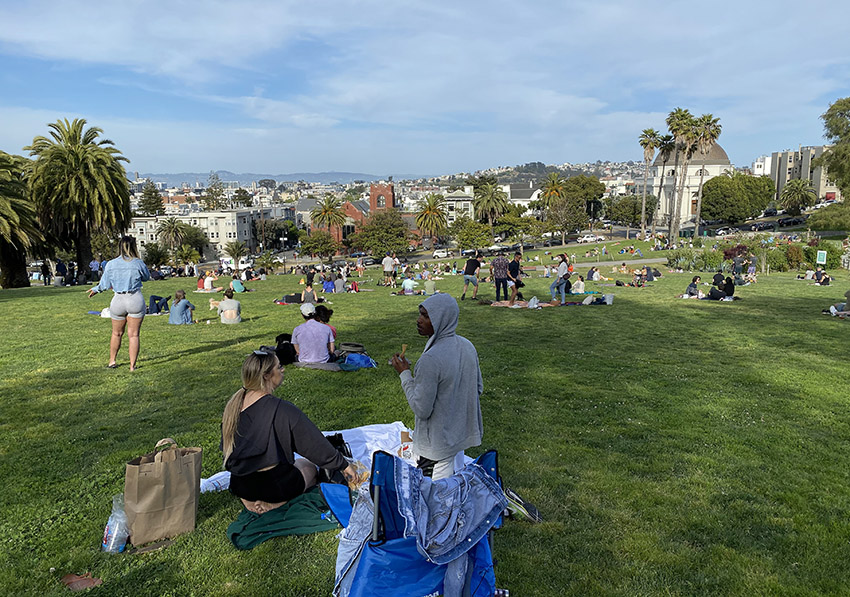 “The mayor will get wind of this,” said Police Officer A. Richmond, who was standing on Dolores Street getting ready to head back to her patrol car.

The mayor on Monday threatened to close Dolores Park if residents failed to follow social distancing.

“This is the last thing I want to do,” said Breed. “We know that people need fresh air, they want to be out. But if we continue to see that behavior become problematic at Dolores Park, it will no longer be available.”

She warned that officers would be monitoring the park.

And they were. Richmond said that officers and park rangers were trying to keep people safe, to tell them not to drink, to wear masks, and to maintain social distancing. Few were listening.

Richard, who was in a group of five friends, said he didn’t see the problem if “everyone stays in their own circle.” He then looked around the park and concluded. “There are way too many people here.”

In another group of friends enjoying wine, Cylane said, “we have been inside for one month, we need fresh air.”  One of her friends said he used an app to show what zip codes had COVID-19 cases. “It’s pretty safe here,” he said, seemingly unaware that the Mission District has the highest number of COVID-positive cases in all the city. “People are really conscious of social distancing.”

In still another group, Alexander and his friends also insisted on the need for fresh air. Yes, officers had dropped by and given them masks. Were they wearing them? No.

Officer Richmond understood what was happening. “They comply,” she said of the park denizens. “And then we leave and they go back to doing what they want to do.”

The scene at Dolores Park felt like a split-screen example of what doctors and city officials warned of during a Friday afternoon UCSF town hall that was streamed on Zoom at precisely the same time that the park was filling with people.

As park denizens tossed frisbees in the air and gathered in groups, their bikes nearby,  Dr. Grant Colfax, the director of the San Francisco Department of Public Health, warned that San Francisco is skating on a razor-thin edge of mass transmission.

“We have flattened the curve of COVID-19,” he said. But, “we are really in the second inning of the long haul.”

“So we have a very narrow window,” Colfax said. If San Francisco passes the threshold of 1.0, cases will begin to surge again.

Dr. George Rutherford, a professor of epidemiology and biostatistics at UCSF, was also on Friday’s town hall and reiterated points he made on Thursday during the university’s Medical Grand Rounds session. He cited a White House model that showed 200,000 cases and 3,000 deaths per day nationwide come June 1.

“These are extraordinary numbers — extraordinarily high numbers,” he said. “And I think it behooves us to be really careful about what we do.”

As some of the worst examples, he showed pictures of hordes of people in Huntington Beach in Southern California. “These things have consequences,” he said, showing spikes in cases in Orange County around the time the pictures were taken in late April, early May.

Asked what could be contributing to a lack of declining cases in San Francisco on Thursday’s Medical Grand Rounds session, Rutherford said without hesitation and only half in jest:  “Dolores Park.” He named other contributing factors, like out-of-town visitors and transmission among essential workers, but his message about large crowds on sunny days was clear.

He urged people to socially distance, wear face masks, and engage in only essential outside activities.

“It’s a direct trade-off … between the economy and mortality,” he said. 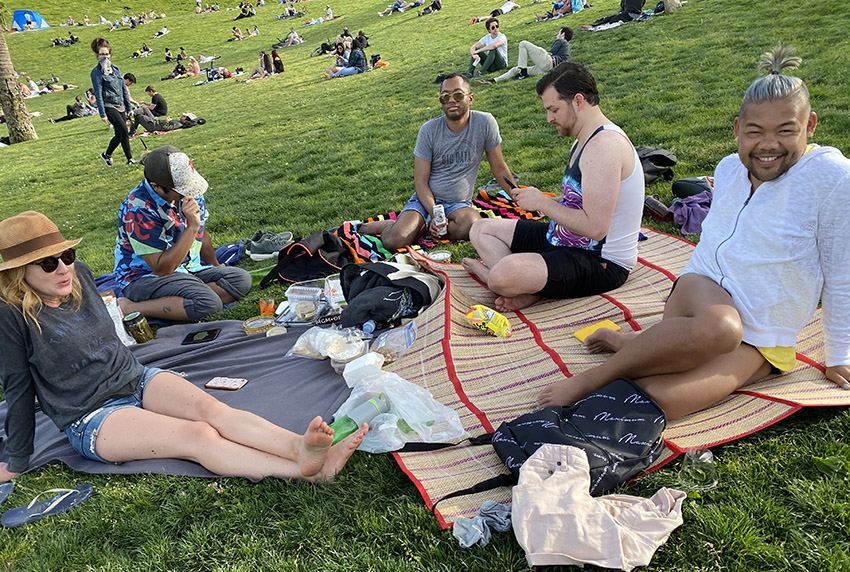 A group of friends enjoying the park. The officers had been by and dropped off masks. Photo by Lydia Chávez.