If denizens can’t follow the rules, Dolores Park will be closed 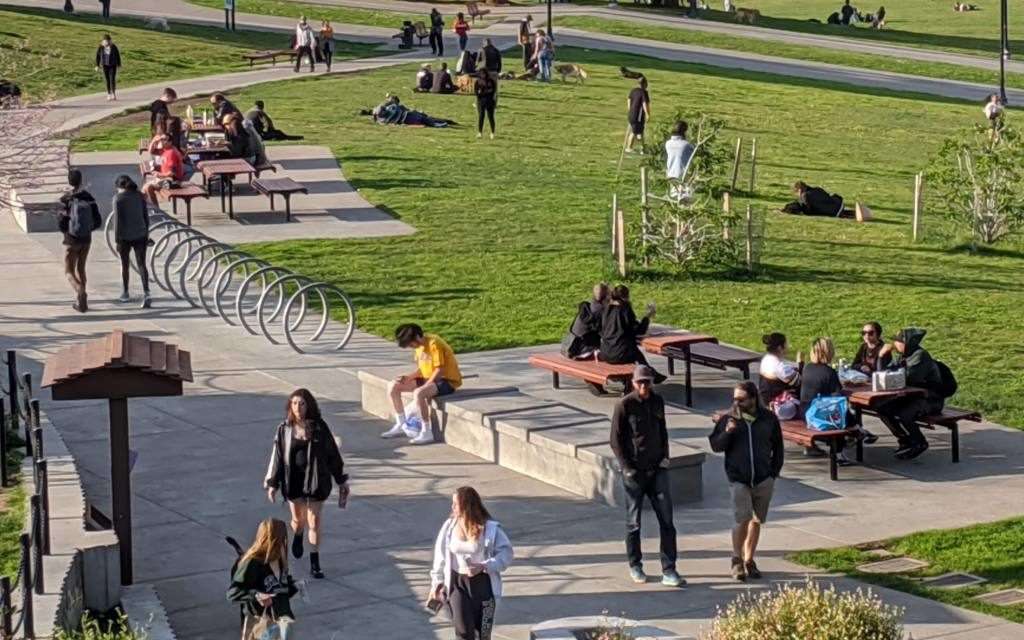 Dolores Park, March 20. Photo by Matthew Chandler who raises the question of how safe it is to be congregating around picnic tables.

“This is the last thing I want to do,” said Breed. “We know that people need fresh air, they want to be out. But if we continue to see that behavior become problematic at Dolores Park, it will no longer be available.”

She said that they will be monitoring the park for the next couple of days.

Today was also the first day of a new regional shelter-in-place order that allows construction to resume, as well as some outdoor businesses, such as nurseries. While they did not say when San Francisco would follow suit, she said city officials were watching Gov. Newsom’s new directives that allow for some small retail places to reopen as early as Friday.

“We are entering into the next phase this week,” Gov. Newsom said. “At the end of the week, with modifications, we will allow retail to start operating across the spectrum …This is a very positive sign, and it’s happened only for one reason: the data says it can happen.”

Retail is unlikely to open here on Friday, Breed said during today’s press conference with other public health officials. Instead, she and other officials focused on the expanded testing announced earlier in the day and ongoing issues with residents abiding by the rules. On the latter, Breed also warned residents about policing other people. “The last thing we need are people who think they are the coronavirus police,” she said.

“Focus on yourself and what you’re doing,” she said.

She reminded residents that joggers and walkers are not required to wear masks unless they are in a line or a store.

Breed also sent a reminder to car owners who do not move their cars during street cleaning.

“Here is another warning,” she said. “Not only will we start to implement ticketing around street cleaning, we will look at other ways in which we can address this particular issue if we don’t see a change.”

Breed said being unable to leave the house to move your car was not an excuse.

“There are a lot of able-bodied people who are able to get up and move your car,” she said. “At a time when we need to clean our streets the most, we don’t have the luxury to allow this to continue.”

Dr. Grant Colfax, the director of the Department of Public Health, said that the city is inching closer to the goal of universal testing for all San Franciscans with today’s announcement that all essential workers can get tested for free – regardless of whether they have symptoms.

“We will continue to build our testing program,” he said. “We plan to expand testing in shelters and other congregate settings and to expand testing options in communities that are most impacted by health disparities, economic equality, and discrimination.”

Essential workers can register for the free testing by going to the CityTestSF website, or by calling 311, and they will be scheduled at one of the city’s several testing locations.

Breed also stated that the Department of Public Health will issue a health order requiring universal COVID-19 testing at the 21 private skilled nursing facilities throughout the city. Starting this week, everyone at Laguna Honda Hospital will be tested for COVID-19 as well, she said.

As of today, there are 21 confirmed cases, including 16 staff members and five residents, at Laguna Honda.

Both Breed and Colfax reminded people who may receive negative test results that they should not become complacent.

He advised that everyone continue to take precautions during the pandemic, Colfax said.

Mary Ellen Carroll, the executive director of the Department of Emergency Management, also reported that the city is “finalizing the evaluation of Safe Sleeping Sites” and will announce further plans in the near future.

Safe Sleeping Sites are areas within the city where homeless individuals living on the streets would be provided with free meals, medical and sanitary services while being able to follow social distancing and public safety precautions to reduce the spread of COVID-19.

In terms of crime statistics, SFPD Chief William Scott also reported a 24 percent decrease in property crimes last week, compared to the week before. However, Scott said that they saw a “slightly” higher number of violent crimes, including a shooting in the Mission that critically injured a bystander on Friday.

The critically injured victim was identified as Courtney Brousseau, 22, who is a local transit advocate, Twitter employee, and recent UC Berkeley graduate.