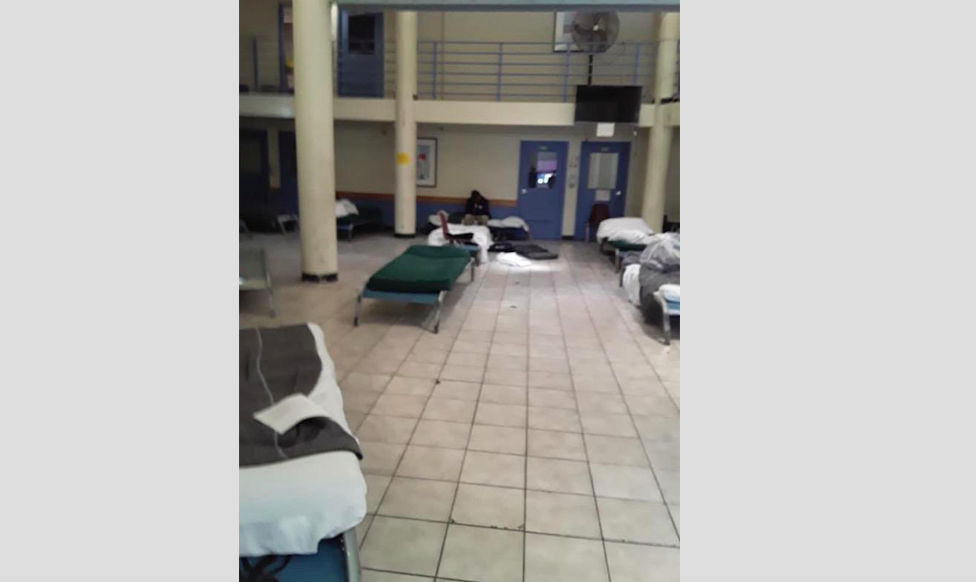 A lone resident is seen within the MSC-South homeless shelter, San Francisco’s largest, on Friday night — hours after Mayor London Breed announced an ‘outbreak’ of COVID-19 here. Some 71 residents and five staff tested positive. After Breed announced MSC-South would become a medical facility, that plan was abruptly changed; every remaining resident is now in a quarantine or isolation hotel.

ALSO: COVID-19 outbreak among the homeless may yet undo the city’s best-laid plans — just like everyone feared it would

Let’s start with the facts, which are incontrovertible.

On Tuesday, March 17, at the stroke of midnight, San Franciscans were made to shelter-in-place, not at the declaration of Mayor London Breed, or any elected official, but due to a regional order banged out over the prior weekend and released by seven health directors across six Bay Area counties.

You can see it here. You can see the places where the order states “BLANK” so each of the six counties can insert “San Francisco” or “Solano” or Alameda” or whatever into its version of the text.

The order concludes with a line marked “NAME, Health Officer of the County of BLANK.”

This order was superseded on March 31 by an extension. You can see it here. You will note that San Francisco has simply copied-and-pasted the text from Santa Clara, which explains why it lists the COVID-19 case totals for that county. (San Francisco only met and passed the 848 cases listed in this March 31 dictum on April 12 or thereabouts — after the outbreak at the MSC-South homeless shelter. More about that momentarily.).

Late at night on March 15, state officials confirmed to me that we would be getting a regional shelter-in-place order coming out the next day, and the announcement would be made by the counties’ health directors on Monday afternoon.

And that did happen. You can see it here. But, before the seven doctors spoke at a press conference helmed by Santa Clara health officer Dr. Sara Cody, San Francisco Mayor London Breed scheduled her own, earlier press conference.

Officials in multiple Bay Area counties told me they were taken aback by this deviation from an agreed-upon plan.

Here are the facts, again incontrovertibly: An early March study in Santa Clara led by the Centers for Disease Control found a ghastly 11 percent of sickly people it surveyed tested positive for COVID-19 — leading county health director Dr. Cody to convene her medical colleagues and issue that regional order only days later. And if you don’t believe me, believe the San Francisco Chronicle’s brilliant Erin Allday.

But, by holding her press conference first, Breed grabbed the spotlight and the nation’s attention. A regional order issued by regional health directors for health reasons has instead been portrayed — inaccurately — as a unilateral San Francisco crusade, led by an intrepid San Francisco elected official.

Other counties’ elected and appointed officials have grumbled quietly about this, and journalists, to my knowledge, have not yet put all these facts in one place.

Perhaps that’s because the mayor deserves no small degree of leeway in the midst of a crisis. And San Franciscans should be, to some extent, grateful for Mayor London Breed.

We should be grateful that our mayor took the COVID-19 threat seriously, listened to her health experts, and supported their dictums. This is not faint praise; this is more than many local, state and — notably — federal officials could be bothered to do. The comparison of Breed tweeting out warnings of a pending shelter-in-place while New York City Mayor Bill de Blasio made theater recommendations is telling, regardless of who issued the shelter-in-place orders.

Breed declaring a state of emergency on Feb. 25 was a move that has aged well. San Francisco, and the Bay Area writ large, have not been ravaged by COVID-19 as other areas have, and that’s because of relatively early, aggressive actions (at least among the housed population).

And that is happening. To wit, in the latest blithe report from a national publication that San Francisco is single-handedly leading the charge against COVID-19, The Atlantic this weekend published a jarring article titled “The City That Has Flattened the Coronavirus Curve: Mayor London Breed’s early and aggressive moves to contain the outbreak have made San Francisco a national model in fighting the pandemic.”

Separate and apart from premature medical diagnoses in a city in which, for weeks, first-responders purportedly had to drive out to Hayward to be tested — embarrassing San Francisco government officials — this article does not make any mention of the five other counties under the identical regional order.

It does not, in fact, make any mention of that regional health order, issued by seven health directors in six counties. It does not make any reference to Dr. Cody or the CDC-led study in her county that led to a cadre of health directors convening and issuing this order. Rather, The Atlantic states that Breed issued the order, which is factually incorrect — and, given the omission of the five other counties and their health directors, is also highly misleading.

The city’s non-mandatory “aggressive recommendations” to curtail the virus included “canceling non-essential events” including “large gatherings such as concerts, sporting events, conventions, or large community events” — but the Dubs — a team with a 15-50 record — were still allowed to fill Chase Center for two more games.

The Atlantic reports that Breed was inspired to shut this city down when she saw horrific photos and videos emanating from Wuhan from late 2019 and early 2020 — even though, again, the health officers shut this city down. But the article does not report that she wrote a letter to would-be attendees of the massive February RSAC Conference in San Francisco downplaying their COVID-19 fears.

“Risk of becoming infected with COVID-19 in San Francisco is low as the virus is not circulating in our community,” she wrote on Feb. 20. “San Francisco is open for business … as leaders in business and government, we must set an example to prevent fear, rumors, and misinformation from guiding our actions.”

That conference was not canceled, despite Verizon and IBM seeing fit to pull out. At least two attendees did, indeed, subsequently test positive for COVID-19. 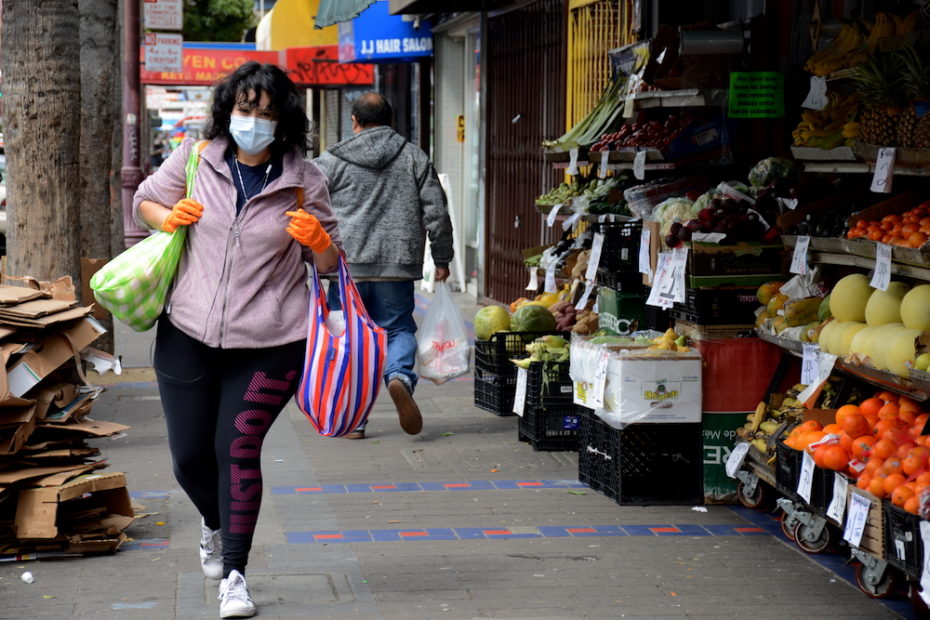 All of which led up to Breed’s April 10 announcement that 68 homeless residents and two staffers at MSC-South had tested positive for COVID-19, numbers that have since been updated to 71 residents and five staffers.

And we are all still waiting to hear how awful the outbreak will become at Laguna Honda Hospital — city officials I have spoken with are bracing for a dire outcome. Dozens of cases are reported in San Francisco’s single-room occupancy hotels, too.

So, the city’s manic, incoherent and insufficient COVID-19 plans for its homeless and underserved populations isn’t a mere footnote in the grander story, as The Atlantic portrayed it. It may end up being the story. It’s a major weak spot that could undermine all the city’s best-laid plans, and swamp much or all of the good work San Francisco did.

Even if you don’t care much about the plight of impoverished and/or homeless people — and, clearly, many in this city do not — they will still wander about breathing your air, get sick and go to your hospital and need to use your ventilator. Even the most selfish person should realize this is everyone’s problem.

A massive outbreak in a crowded homeless shelter manned by under-equipped staffers was this city’s Chernobyl — the predicted and predictable outcome of a concatenation of missteps and dubious decisions.

For weeks, a growing chorus from the Board of Supervisors, faith leaders, and homeless advocates has called for housing the city’s vulnerable homeless population not in crowded, congregate shelters or on the streets but in the city’s vast recesses of vacant hotel rooms.

But Breed has resisted this call. First, it was explained that the asymptomatic homeless were not one of the priority groups as prioritized by the Department of Public Health. Then this was portrayed as a staffing/capacity issue. And, finally, it was portrayed as a cost issue; obtaining thousands of hotel rooms and shuttling the homeless into them was not deemed to be “fiscally prudent” for a city facing a potential shortfall exceeding $1 billion.

Along with all that, Breed claimed that “people who have drug challenges and mental health issues are not going to take a room and stay there.”

Fair enough. But the relatively functional homeless people who don’t fit those criteria — perhaps half, by the reported estimate of this city’s homeless department officials — would take a room and stay there. Families would take a room and stay there. The staffing at such a hotel wouldn’t need to be so different than what you’ll find in supportive housing — and San Francisco houses tens of thousands of people in supportive housing every day.

And the costs, while astronomical, likely pale in comparison to paying on the back end in hospitals after leaving people in shelters or fending for themselves on the streets during a pandemic. To say nothing of the moral or humanitarian costs of doing that.

After announcing the outbreak at MSC South on Friday, Breed told the press that “the fact is, we were on top of it.”

Considering the weeks of high-decibel begging to take action to avoid just such an outcome, this was a truly mind-boggling thing to say. It was akin to boasting, “We caught the baby on the first bounce.”

She also noted that the city could “act fast” because hundreds of hotel rooms were at the ready in the event of an outbreak. But not, it would seem, beforehand.

While Breed initially announced that MSC South would become a medical center, that plan, like so many others addressing the plight of the city’s neediest, was quickly scrapped. Instead, the shelter-dwellers were moved, en masse, to hotels.

MSC South is now empty. A line of tents ring its perimeter. 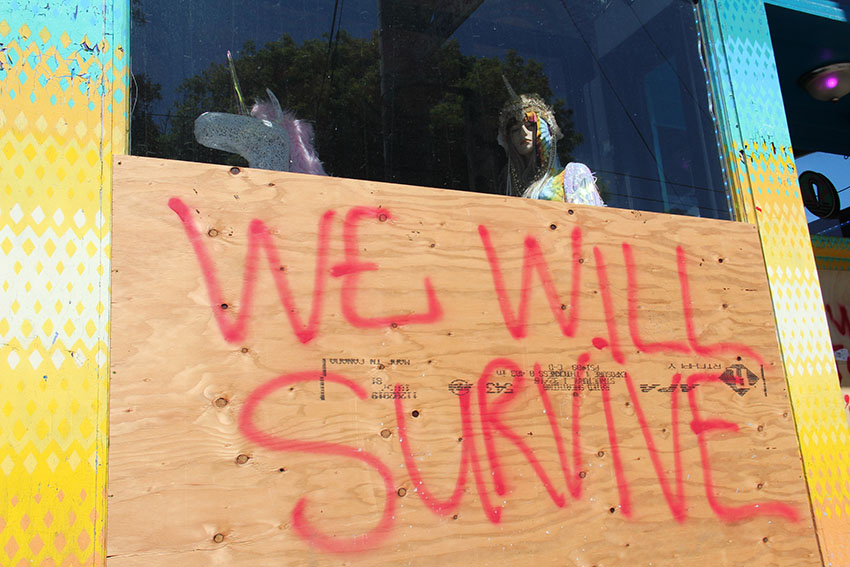 Articles like the one in The Atlantic play into San Francisco’s natural sense of exceptionalism. And, in this case, that isn’t just uncalled for and factually indefensible. It’s also dangerous.

It allows us to ignore the written evidence and see things as we’d simply wish they were. San Francisco is doing better because we are better. It allows us to ignore the dearth of testing and insufficient contact tracing and false starts and reversals on housing the homeless and the melodrama on acquiring hotel rooms and the indignant responses to calls for transparency.

It allows us to shrug our shoulders and write off the shelter outbreak as inevitable — when it didn’t have to be.

We can do better. We must do better. Lives are at stake. We aren’t out of this yet.

That, too, is an incontrovertible fact.