COVID-19: San Francisco to prioritize placing some homeless street-dwellers in hotels — after much coaxing 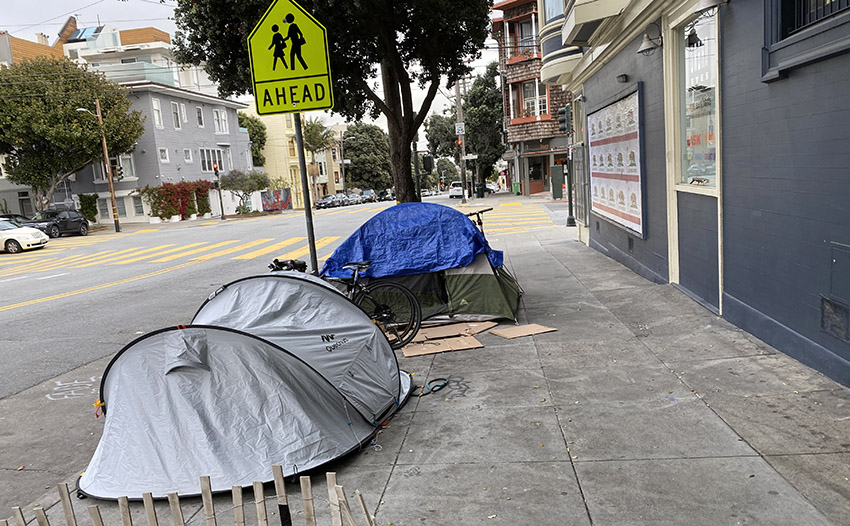 Reports of other cities obtaining hotel rooms at bargain rates

Mayor London Breed on Wednesday declared that homeless street dwellers over age 60 and suffering from underlying health conditions would be prioritized for vacant hotel rooms during the COVID-19 outbreak.

And everyone thought this was a good idea. But, moving beyond that, it’s difficult to find much broad agreement among members of city government regarding what to do with the thousands of rooms slated to be on hand by week’s end.

Yesterday’s announcement was the first nod toward proactively relocating any of the thousands of people living on the street into the hotel rooms obtained by the city. The tally of aging street-dwellers with underlying conditions who are also capable of self-care — the population Breed prioritized on Wednesday — was pegged for Mission Local at around 300.

That’s a start — but San Francisco homeless advocates and politicians have been calling for the proactive placing of thousands of vulnerable, asymptomatic unhoused people into vacant hotel rooms before San Francisco experiences a massive public health calamity among this population.

That call has gone largely unanswered. And the city, in fact, on March 23 ceased allowing new entries into homeless shelters — relegating many to remain on the streets.

“Everybody keeps saying the right things: That we care about COVID-19 patients and unsheltered people,” says Supervisor Aaron Peskin. “But why it’s taking so damn long is a mystery.”

It’s not a challenge to find medical professionals pushing for rapid rehousing of the unsheltered to combat the spread of COVID-19. But they are not working for the San Francisco Department of Public Health, which formulated the current city policies.

The Board of Supervisors on Tuesday passed a resolution to expedite placing homeless people into hotel rooms. Resolutions are non-binding, and the Board passes many of them. But what was notable was that this one passed unanimously.

When asked what was the delay in obtaining and filling hotel rooms, Human Services Agency director Trent Rhorer replied, “There is no delay.”

Not, at least, for the city’s narrowly defined set of populations the Health Department believes should move to hotels.

“The Department of Public Health has been moving COVID+ and [people under investigation] out of the hospitals into hotels since late last week. This is the No. 1 priority … getting people out of the hospital who are only there because they have no place to quarantine and cannot be discharged to the street.”

The city, Rhorer continues, now has more rooms on hand than needed to accommodate the patient flow. It can activate more as needed.

“It doesn’t make sense to bring online and pay for 5,000 rooms today (and deploy the necessary staff) when the current patient flow doesn’t warrant it,” Rhorer says.

This illustrates the divide between supervisors and homeless advocates, pushing to proactively house unsheltered people, and the city’s official policy of accommodating needs as they arise for prioritized populations.

We met with a wall of excuses for weeks. Finally, policy is shifting. I want to be clear: Mayor, DPH, and departments are doing a lot extremely well in this crisis. But resistance to hotel rooms for nonCOVID homeless has been irrational. We need action on this now

While Rhorer admits he is the public face of this policy — and, he adds, the “object of much scorn” from members of the Board of Supervisors — he notes that it was formulated not by him but by doctors at the Health Department.

Mission Local was the first to report the city’s mass effort to obtain thousands of vacant hotel rooms on March 19, and followed the next day with a piece about the hotels entering a bidding process against one another to provide rooms to the city for a period of at least four months.

In San Francisco, city officials expected 1,200 rooms to be at the city’s disposal by end-of-day Wednesday and, perhaps, 3,000 by week’s end. More than 10,000 have been offered to the city at varying rates.

On March 23, the Chronicle reported that thousands of rooms had been proffered via this process for between $164 and $213 nightly.

City correspondences obtained by Mission Local indicate that 2,000 units acquired by Los Angeles to quarantine COVID-19 patients or house “vulnerable, asymptomatic” people were obtained at the rate of $40 a night.

The City of London has purportedly obtained hundreds of hotel rooms for homeless “rough sleepers” at £20 to £25 ($24 to $30), with many more expected to come.

Rhorer, the head of the city’s Human Services Agency, disputed the published numbers for the city’s per-night rates with local hotels.

“You haven’t seen any numbers in San Francisco because we have not released the room rental terms for our executed contracts … Be that as it may, I can tell you that the rates we are negotiating are far below what was initially reported in the Chronicle.”

Rates notwithstanding, homeless advocates have criticized the city’s stated plans as slow and reactive. Christopher Herring, a UC Berkeley sociology doctoral student who works with the Coalition on Homelessness, was baffled by the notion of “accommodating the patient flow.”

In Seattle, he points out, four shelters were locked down in one day after a resident tested positive — necessitating closures and accommodations for exposed homeless shelter-dwellers. In Las Vegas, residents of a shelter where a resident tested positive were moved to an outdoor parking lot, with stripes designating proper social distancing as they slept on the blacktop.

“The whole idea of ‘patient flow’ is going to get screwed up if you want to move people who come in contact with COVID-19,” he said. “San Francisco’s whole model is reactionary. Even a short delay will result in more deaths and more hospital beds used.”

Staffing models at hotels for asymptomatic and largely homeless people shouldn’t look so different than those already in place at supportive housing, city homeless officials note.

Wednesday’s move to bring inside aging and unhealthy street dwellers was hailed as a positive step by members of the Board of Supervisors and homeless advocates. But one homeless services worker said he still has little to offer the people he deals with, living on the streets during a pandemic and shut out of shelter.