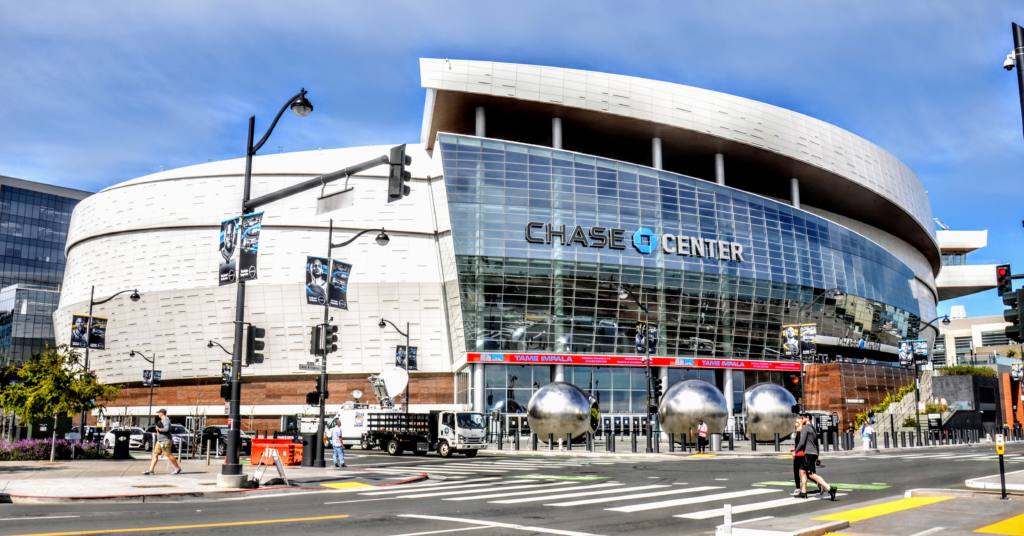 Update, March 11: Mayor London Breed has initiated a moratorium on gatherings of 1,000 or more — regardless of venues being public or private. That includes Warriors games. This will, initially, last for two weeks.

Original story: The Golden State Warriors have opted to continue holding games in front of large crowds at Chase Center in spite of the spreading COVID-19 virus — and also in spite of repeated calls to cancel them from multiple San Francisco officials.

“I have personally spoken to the head of the Warriors organization, Rick Welts,” said Supervisor Aaron Peskin. “I have expressed my desire that they do this voluntarily before, in the days ahead, we do it as an emergency public health order. It’s not a matter of ‘if.’ It’s a matter of ‘when.’ I hope they come to that conclusion before we make them come to that conclusion.”

The office of Mayor London Breed on Friday released a set of “aggressive recommendations” to curtail the spread of the virus. These included “canceling non-essential events” including “large gatherings such as concerts, sporting events, conventions or large community events.”

In what would be challenging to characterize as an “essential event,” the 15-49 Warriors host the Los Angeles Clippers tonight at Chase Center. The team over the weekend posted signs at the entrance informing anyone who entered that they did so at their own risk, and indemnifying GSW Arena LLC and the National Basketball Association. 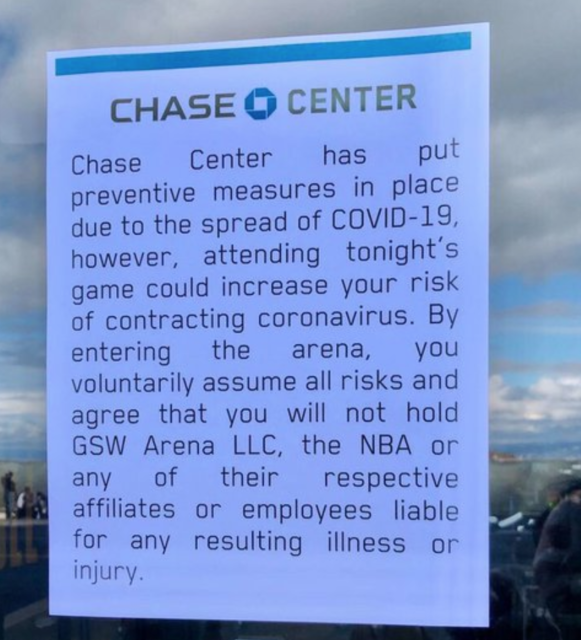 As seen at Chase Center.

Prior to tonight’s game, signs warned anyone who has in the last two weeks experienced “fever, tiredness, dry cough, aches & pains, nasal congestion, runny nose, sore throat, or diarrhea” against entering the premises.

When asked what the team would do if the city’s “recommendations” became something more forceful, the mayor’s office stated “we haven’t had that conversation yet.”

Mission Local’s calls to Warriors CEO Rick Welts have not yet been returned.

When asked by The Athletic if the Warriors should be holding games at this time, Dr. John Swartzberg, a UC Berkeley infectious disease expert, offered a flat “no.”

“I think large gatherings of people in closed environments in the case of a pandemic is not prudent,” he continued. “It’s the perfect way to spread the virus.”

In San Francisco, gatherings of more than 50 people have been nixed at city-owned venues, and a number of public gatherings, including the St. Patrick’s Day Parade, have been canceled. The ballet and symphony have both pulled the plug for the near future, and San Francisco State, City College, and Academy of Art University have curtailed in-person classes.

Mayor London Breed’s office said it is basing its decisions on the suggestions of Health Director Dr. Grant Colfax, and he has not yet urged the broad cancelation of events that would affect gatherings at the 18,000-seat Chase Center.

“The experience we had here in Santa Clara County is, sometimes you can ask these private entities to do the right thing. But sometimes they don’t, so you have to not just ask but require,” Campos said. “In San Francisco, it seems, that is what it will take to cancel something like a Warriors game. By every indication of what the city’s guidelines say, something like that should not be taking place at this time.”

Campos was further confused by the city’s steps to ban large gatherings in public venues but not private ones: “A virus does not discriminate based upon who owns the facility.”

We do not have a lot of hours or days left to talk about this, and yet city officials have failed to answer at least one key question: why have we not used the power, as a matter of state law, to cancel large private events? @sfbos #coronavirus

Rachael Kagan, a spokeswoman for the San Francisco Department of Public Health, said that, “we certainly hope people abide by the recommendations.” When asked what factors Colfax will use to decide if and when to do more than recommend the curtailment of large private gatherings, she replied “there is not a crisp trigger point. What we look at is the virus in the community.”

“We look at the Centers for Disease Control guidelines, and talk to state officials and the global health experts at UC San Francisco,” Kagan said.

These discussions have apparently not yet led Colfax to pull the trigger that his Santa Clara counterpart Dr. Cody did.

Peskin predicted that day would come — and soon.

“I think it’s complicated for the Warriors, and not just financially, but also relative to working with the league and its commissioner,” he said. “But this is all happening very, very quickly. Every city will be here within a few hours or days of one another. We’re getting there. It would be nice, given our long-term relationship and shared interest, if they came to this conclusion on their own.”

Like this kind of reporting? Your support keeps it coming.