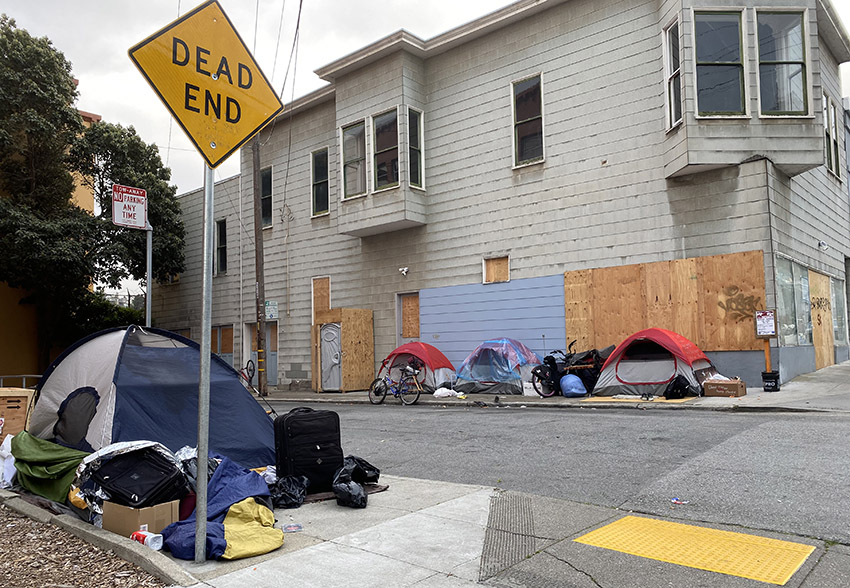 More hotels express interest in working with the city, even as access to homeless shelters is curtailed

Such social distancing guidelines are exactly what city, state and federal officials have been telling everyone else to follow. That, however, is still not the reality or the policy in the city’s homeless shelters.

“There is no social distancing in the shelters right now. They don’t even have thermometers,” said Christopher Herring, a UC Berkeley sociology doctoral student who often works with the Coalition on Homelessness.

To remedy this, several members of the Board of Supervisors have been adamantly pushing for the city to obtain ever more rooms in its empty hotels and begin proactively housing the homeless and other vulnerable populations in these rooms. The March 23 guidelines caught them by surprise.

“I am concerned about shelters and conditions in shelters, but the solution cannot be to have people stay on the streets. For the city to shut down access is very problematic,” said Supervisor Matt Haney. “It’s dangerous, reckless and inhumane.”

Emily Cohen, the Department of Homelessness’ interim director of strategy and external affairs, said curtailing new shelter access was a necessity at this time.

“In order to move forward with social distancing, we need to have fewer people in the shelters,” she said. “All of our shelters are at max capacity; we put as many beds into them as we can. We don’t want to kick anybody out. What we will do is slow inflow into the shelters. We will use that to create thinning within to implement social distancing.”

Supervisor Aaron Peskin says the city currently has access to some 350 hotel rooms in which to house infected or vulnerable individuals, and, over the weekend, hotels offered some 8,500 at varying rates. “Since then, a bunch more hotels have come in,” he says. “We are literally entering into agreements with them every day.”

How soon the rooms actually become available, however, is unknown. As are the timelines to potentially open more spaces for the homeless people who are, currently, being kept out on the streets.

The March 23 guidelines illustrate shifting city policies in a time of great uncertainty.

During a testy exchange with Haney at last week’s Board of Supervisors meeting, Trent Rhorer, the head of the Human Services Agency, bristled when the supervisor asked him if city policy was to keep the homeless on the streets. Rather, he said, The city’s Department of Public Health “would prefer that people on the street are placed in shelters and congregate areas where they can better monitor them and can bring services on site to make sure they’re safe.” (Emphasis ours.)

At a March 23 press conference, Rhorer said that city officials have been instructed to not “bring encampments inside where they can infect others.”

He added that “The [Centers for Disease Control] protocols do not state that individuals from the street should be brought indoors.”

That’s true. Of note, the CDC protocols state that “unless individual housing units are available, do not clear encampments during community spread of COVID-19. Clearing encampments can cause people to disperse throughout the community and break connections with service providers. This increases the potential for infectious disease spread.” (Emphasis ours.)

It warrants mentioning that those brought inside could be infected by homeless people who are already inside. And whether “individual housing units” are available for street- or shelter-dwellers or soon will be is a matter of contention among city officials.

While members of the Board of Supervisors are pushing to throttle up acquisition of hotel rooms and proactively house vulnerable homeless populations, Rhorer and others have been in favor of prioritizing rooms for people with COVID-19 or awaiting test results, quarantined people, first responders, and others.

Mission Local was unable to reach Rhorer and our message for a representative of the Human Services Agency has not been returned. Other city officials, however, bemoaned shifting guidelines and instruction coming to the city from the state and federal level.

“The guidance keeps changing,” said one. “It takes us a few days to implement things and then they change.”

Peskin noted that shifting instruction on what level of HVAC system would be acceptable in hotel rooms used for quarantine has limited the 8,500-odd hotel rooms put in play over the weekend to about 6,500.

“In this super rapidly changing world, pointing fingers is wasting time,” Peskin said. “The only thing we should be focusing on is getting our hands on those rooms. We can address all these issues in real time.”

“There are serious dangers to being on the street or being in the shelters,” said Herring. “Some folks who are not as susceptible to the virus may want to go to the shelter to get food and provisions. Others who are highly susceptible may not want to be in a congregate setting. The irony is, those who are most susceptible are also probably least well-equipped to stay on the streets.”