COVID-19: San Francisco may have 4K hotel rooms by next week — but how much can one county do to fight a global pandemic? 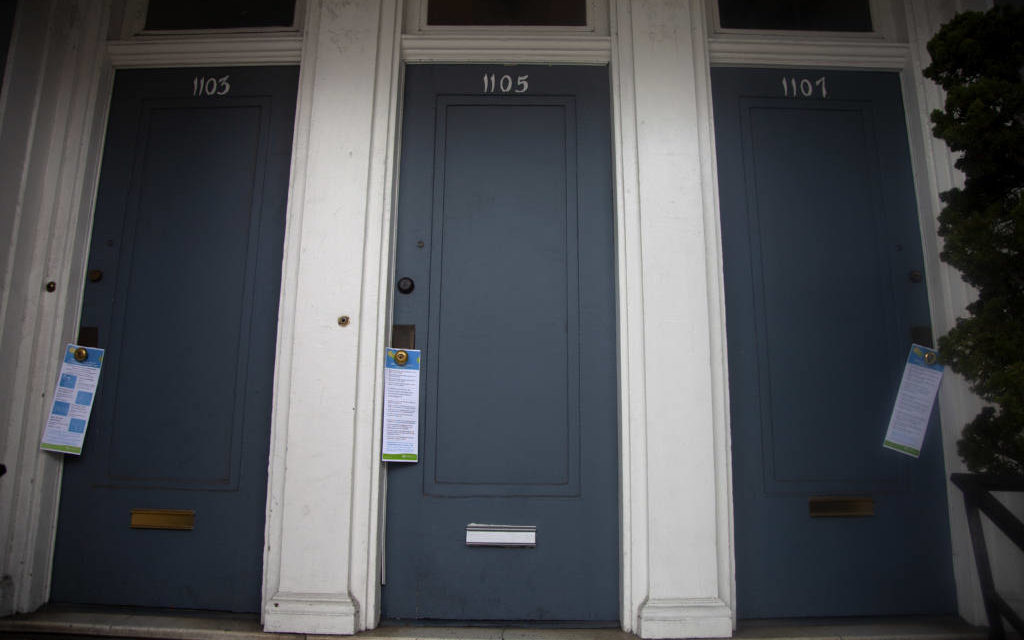 Doors across the Mission District are seen with paper placards discussing preventive measures to Covid-19.

Think of it as a chocolate and peanut butter situation — but that’s not chocolate.

We have a pandemic, and empty hotels, and large numbers of San Franciscans who are sick, or showing symptoms, or at great risk of all of the above. Any fears major hotels and hotel chains — and we do mean major — harbored about being branded as some manner of plague sanitarium has long since given way. Iconic San Francisco institutions are reaching out to your elected officials and making deals.

“I am picking up units, in the hundreds, by the hour,” one official tells me.

We are told the mayor will be updating us on this effort today. It’s not certain just what she’ll say, but Mission Local is told that 3,000 to 4,000 rooms may be in the city’s grasp by next week. (The price tag for this, per a city official in the know, is “who cares?”).

For those of you keeping score at home (and many of you may well be at home), this is what it took for San Francisco’s government to perform at an effective level. Our spectacularly wealthy city struggles to tie its own shoes during the best of days. But, in the face of a global pandemic, we’re overachieving.

The city has acted to stem the health and economic effects of a plague. Was San Francisco slow to do so? Yes. Notably so. The Warriors rebuffed the city’s requests to shut down and were still playing games barely over a week ago; we could’ve been far more aggressive.

And yet, we’re still ahead of virtually every other municipality.

Your humble narrator wrote earlier this week that crises expose — and enhance — the problems you already had. That’s true, and that could well be our undoing.

The rampant income inequality and housing crisis this city couldn’t or wouldn’t address loom ever larger now. And this city’s inability to stem the staggering number of unhoused San Franciscans could well lead to a humanitarian crisis — and undo every other well-laid plan.

Also, underlying every move San Francisco and its neighboring counties makes, is the cold realization that a county can only do so much.

“On the national level, the lack of preparedness, the inability to ramp up testing capacity, is perhaps the biggest failure in the history of this country in terms of preparedness,” says Dr. Jake Scott, an infectious disease physician and assistant clinical professor at Stanford University’s School of Medicine. “Hundreds of thousands of people are going to die unnecessarily because of this horribly slow response.”

“The horse,” he continues, “is out of the barn. Hospitals all over the country are going to be quickly overwhelmed with a surge of patients. There is only so much a county can do.” 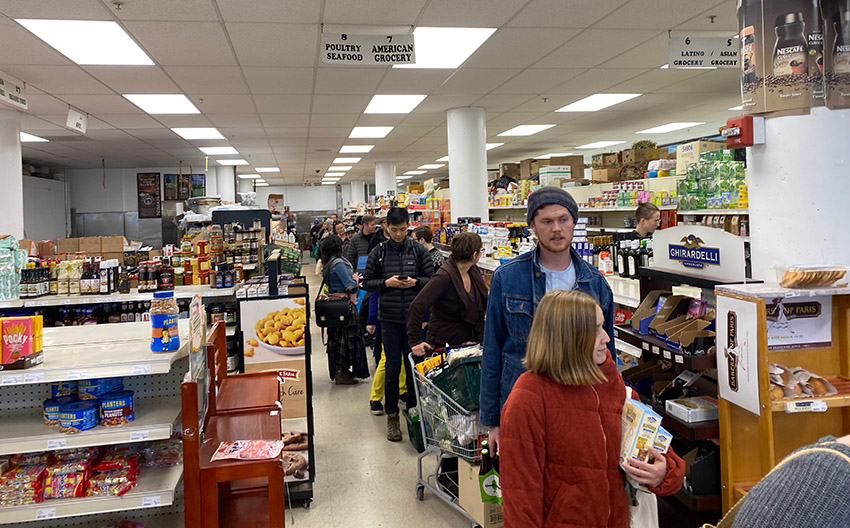 That’s not cynicism and that’s not meant to drain your hope. That’s just real talk. And, again, there’s only so much a county or even region can do, even a region as rich as ours. Even and especially in the face of the federal government’s staggering neglect and ineptitude.

The Trump administration’s response to this pandemic brings to mind the ABC Wide World of Sports intro during which ski jumper Vinko Bogataj crashes spectacularly — only with the addition of ongoing denials that there’s skiing or crashing and an inexcusably lengthy delay before having commenced the skiing and crashing. (For all of this in a nutshell, see Matthias Gafni’s amazing and maddening report in the Chronicle about the passengers on the stricken Grand Princess turning down COVID-19 tests, often at the urging of federal officials).

“This is a war. You do not fight a war in a piecemeal fashion; you don’t fight with each state deciding how it’s going to fight,” said Dr. John Swartzberg, a UC Berkeley clinical professor emeritus specializing in infectious diseases and vaccinology. “A national plan would be very helpful. National leadership would be most appreciated. You’re not going to get it with this government.”

While Swartzberg had praise and cautious optimism for San Francisco’s sweeping shutdowns and shelter-in-place orders, he noted that if and when outsiders from less-restrictive areas dropped into town, it undoes the effort.

San Francisco may have water on three sides of it, but no moat.

He also noted that panicked shoppers crowding grocery stores also “defeats the whole purpose of sheltering in place.” This could’ve been better planned for.

But the underlying shelter-in-place orders are not just feel-good busywork. This is not a scrap-iron drive or countryside Britons drilling on how to repel Nazi invaders by painting over street signs or tossing dinner plates in the road to mimic landmines.

Sheltering-at-home and social distancing are real, and how strictly we follow the rules is going to matter.

“Take it seriously,” says Scott. “Remain at home or, when you’re outside, keep a good distance from people. If you do that, hospitals are going to be less overwhelmed than they would be.”

“There is nothing else we have in our toolkit but social distancing.”

We’ll know how well the moves we undertook today worked out in two weeks’ time after the COVID-19 incubation period lapses. 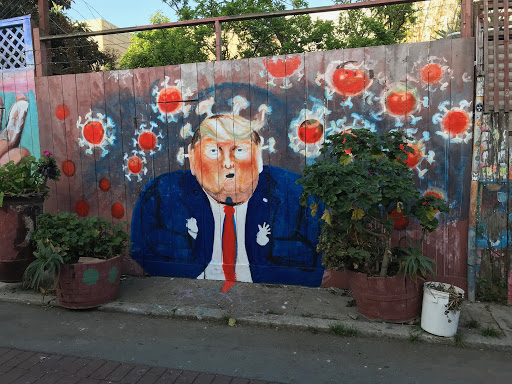 As seen on Balmy Alley. Photo by Contributor.

The Navigation center on the Embarcadero damn near ran out of toilet paper.

Elected officials hustled to drop off 30 rolls earlier this week. Toilet paper is hard to find. Again, this could’ve been better planned for. Soap, hand sanitizer, and other COVID-19 necessities were also in short supply.

Shelters are, in almost any event, desirable to living on the streets. But it is not clear if our shelters are prepared for what’s already here. It’s not clear if social distancing is being practiced or is even possible. When the first COVID-19 case is confirmed in a shelter, it could be the spark that ignites a humanitarian wildfire.

“How can we expand what we want to see in society in times of crisis? I do want to see more shelters with lack of housing — but I am worried about what it means to be in a congregate setting,” said Chris Herring, a UC Berkeley doctoral student in sociology who often works with the Coalition on Homelessness.

He predicts we will — inevitably — see a confirmed case in one shelter, then another, and a series of reactive mass shuntings of sick or at-risk people into the hotel rooms.

Waiting for people to get sick, however, is not an ideal move. “We have to be proactive, not reactive,” says Scott. “When you’re knee-deep in a crisis, it’s too late.”

Just who gets those hotel rooms, and when, and how many we need — and when — figures to be a point of extreme contention. Lives will be saved, no doubt, and our hospital system will, undoubtedly, be spared a crush of people. But the post-facto analysis promises to be damning — no matter what option is taken.

And yet, San Francisco will still suffer because of the lack of a coordinated national response.

“We need a national program,” says Swartzberg. “Appoint a national czar to handle and coordinate this activity. Somebody with intelligence and experience in public health and public issues — not Mike Pence, who was an absurd person to have there.”

But that’s not going to happen. So we need to continue acting at the state and local level, and sheltering-in-place. This is going to drag on for a while. Many weeks if not months.

“What we’re doing now is good. Sheltering-in-place is good,” adds Swartzberg. “The measures will go far, as long as we continue them. And we will feel the strain as this extends into many weeks, if we still have to do this. Which I am sure we will be.”

Swartzberg, himself, is sheltering-in-place. He has not touched his children or grandchildren for two weeks.

“And it’s heartbreaking,” he confirms.

Local journalism is critical. Please continue to help. We’re trying to get useful information up as quickly as possible.