Coronavirus in the Mission: Testing 5,700 people in one week might be harder than it looks 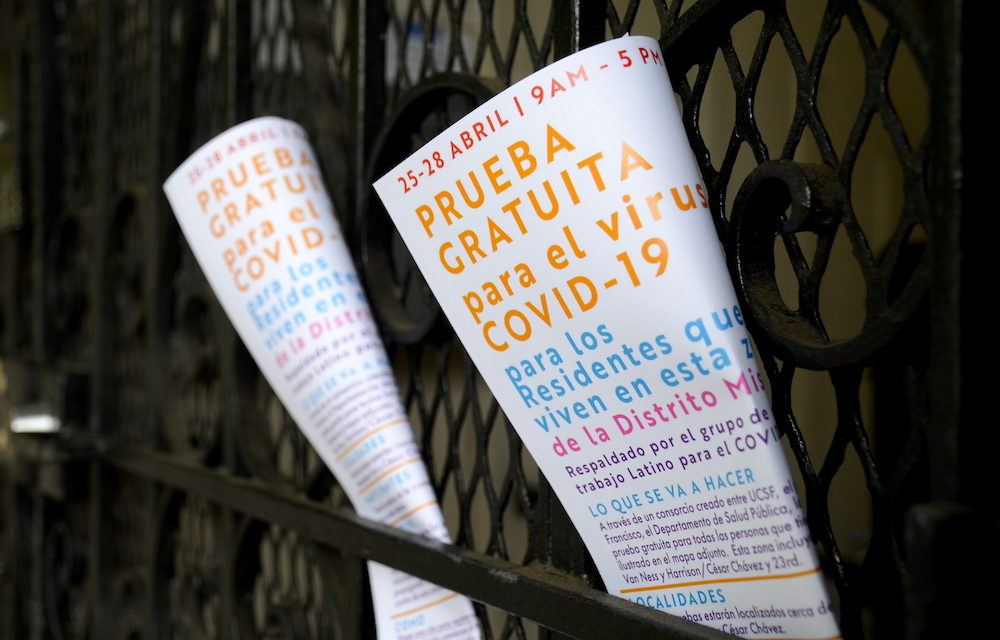 The coronavirus testing that will begin in a section of the Mission District on Saturday will be the most ambitious testing effort attempted in San Francisco since the pandemic arrived in early March. UC San Francisco doctors are, indeed, seeking to test as many as 5,700 residents in the densely populated census tract to learn how the virus spreads.

But with the testing set to begin this weekend, researchers and volunteers are working against the clock, and it remains unclear if a neighborhood heavily populated with undocumented and working residents will show up in the numbers scientists need. Reactions from community members living in the census tract ranged from excitement to reluctance.

“What would I do if I tested positive?” asked a woman named Kimberly, who lives in a studio apartment with her mother and uncle. “My mother is working and my uncle is working two days a week. They would have to stop if I tested positive.” Later today, she said that she would take the test, but her uncle said he would only be interested in knowing if he had already had the virus.

Others said they would gladly take the opportunity.

Armando, who is now unemployed, said he had not heard about the tests — but he and his wife would take them. “I don’t think we are sick. We don’t go anywhere, we don’t see anyone,” he said, adding that he plans to show up to the Cesar Chavez testing site on one of the testing days, though he had no Internet connection to register.

Members of the Latino COVID-19 Task Force, a coalition of citywide Latino organizations that partnered with UCSF on the effort, said volunteers have been going door-to-door and educating people of the study’s existence — and why they should participate.

Jon Jacobo, a member of the task force, said he’s heard a range of concerns. Some have worried it may affect their immigration status, hinder their ability to work, or are generally skeptical of the government. But he’s emphasizing during his outreach that the initiative will not hurt a person’s chances for citizenship and will offer support for people who test positive.

Support services for individuals who do test positive are yet to be determined, he said. But he noted it could take the form of groceries, hand sanitizer, face masks, and other resources. And of course, UCSF will monitor people who test positive and provide retesting, he said.

At a press conference on Monday, Dr. Grant Colfax, the director of the San Francisco Department of Public Health, also noted general skepticism toward the government in the city’s Latinx community. A lot of Latinx patients, he said, are unwilling to participate in contact tracing and contact investigations.

“It is possible that they are fearful of local government, concerned about immigration, or simply don’t have all the information they need to be comfortable,” he said. 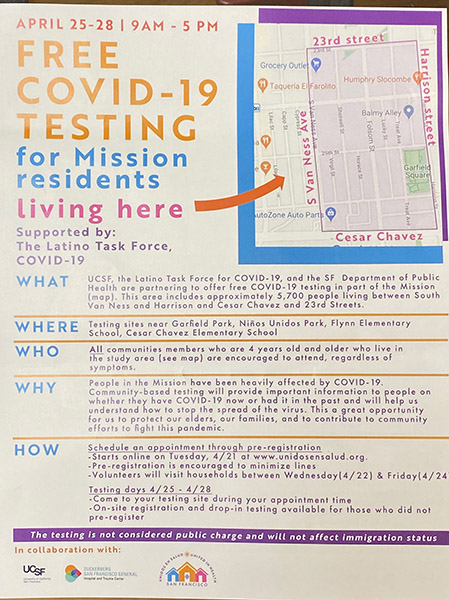 The area code 94110 — which covers a majority of the Mission District — has 166 reported COVID-19 cases, the highest number in any San Francisco area code, according to data released by the Department of Public Health on Monday. The Mission had the 4th highest number of cases per 10,000 residents.

The purpose of the study, said Dr. Gabriel Chamie, a professor of infectious disease at UCSF, is to “understand transmission dynamics of COVID within communities and not rely only on clinic-based data.”

In particular, scientists want to learn how many people might be spreading the virus with mild symptoms or no symptoms at all in a dense area — and Chamie said he and his colleagues would “absolutely” be breaking down and publicizing data revealing whether test recipients were asymptomatic or not.

The testing will help to identify positive and asymptomatic cases, Chamie continued, and work with those people to take the necessary precautions such as self-isolation, so they do not spread the virus further.

Scientists were intentional in choosing their area of study. Census tract 229.01 — an expanse that runs from 23rd to Cesar Chavez streets, and from South Van Ness to Harrison — is one of the densest in the city. It is also 58 percent Latino, the Mission’s highest concentration of Latinos.

Doctors will be conducting tests for the direct presence of COVID-19, as well as “PCR tests,” which determine whether a person has been infected in the past by detecting the presence of antibodies. The direct test is a swab on the throat and in the nose. And the antibody test will use a small drop of blood from a person’s finger. If a person tests positive, he or she will be notified within 72 hours.

“For those who are symptomatic, we’re going to prioritize their tests being run first,” Chamie said. But UCSF can readily process the 1,500 anticipated tests a day, with 6,000 over four days being the goal.

Jacobo acknowledged the project’s ambition. He understands that an effort like this would ordinarily take six months to carry out. “We’re doing it in six days.”

Roberto Hernandez, another member of the Latino COVID-19 Task Force, said the group had around 16 volunteers as of Monday afternoon. “We need more than 16,” he said, explaining that the goal was to reach 1,500 households before testing ended next Tuesday.

To those who are skeptical, Hernandez asks: “Do you want to be six feet under or six feet above?”

“They get it right away,” he said.

Mayra, a Latina who lives in the study area and has a background in urban planning, said she needs no convincing. “Part of the key to managing this is to have a clear sense of how many people are affected, and without us having that information it becomes difficult and dangerous,” she said.

She’ll be encouraging others to participate, she said. “I wish more people had free access to this.”