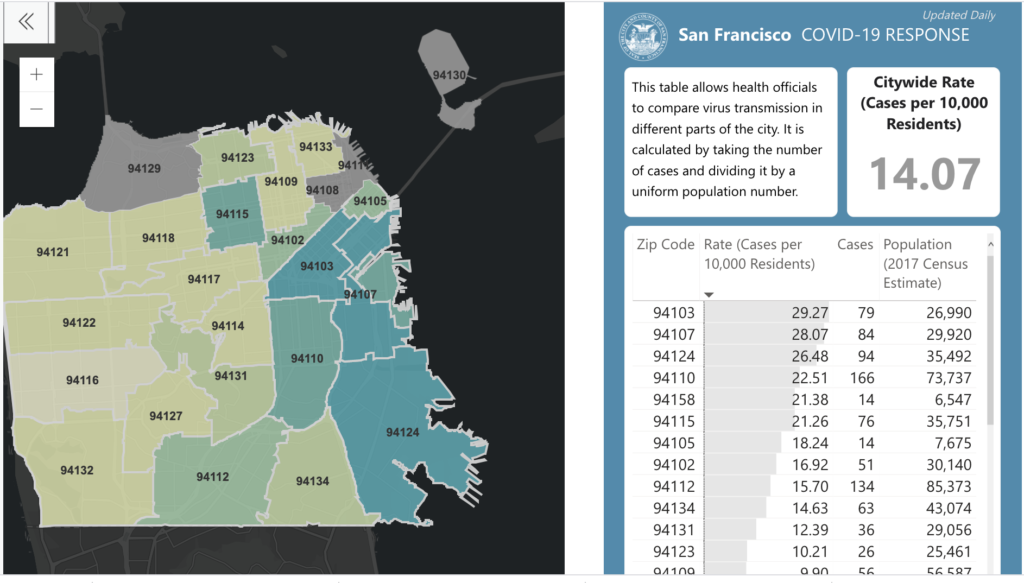 New map on cases released by the city today.

A new map published by the San Francisco Department of Public Health shows the Mission District with the highest number of confirmed cases in the city — 166 — and the fourth-highest rate of infection — 22.51 per 10,000 residents. The citywide rate is 14.07, with the highest rate in SoMa — where 29.27 residents for every 10,000 have tested positive for COVID-19.

It is the first time the city has geolocated the city’s 1,216 confirmed COVID cases. However, city officials have said previously that the Latino population has been disproportionately affected. Latinos now represent 25 percent of the positive cases but only make up 15 percent of the city’s population.

“Nationally, people of color and low-income communities are hardest hit by the coronavirus. For many, the disparate impact of COVID-19 on people of color is no surprise,” said Sheryl Davis, executive director of the city’s Human Rights Commission, in a press release announcing the new map.

The prevalence in the Latino population triggered the decision last week to launch a massive testing campaign in Census tract 229.01, the most heavily Latino population in the Mission, with 58 percent of the more than 5,000 residents identifying as Latinx.

“I want to stress that when it comes to coronavirus, no zip code of any neighborhood is inherently safer than another,” said Mayor London Breed. “Every San Franciscan should continue to follow public health requirements – stay home, stay six feet apart, and cover your face when you’re outside for essential needs. This map should not make anyone more relaxed, or more fearful.”

Dr. Grant Colfax, the director of the Department of Public Health, said at the 1 p.m. briefing with the mayor and other officials that the “map is sobering but unfortunately, it is not surprising.”

“Unfortunately it looks like many other maps in San Francisco, including those that depict health disparities, income inequality, and racial and ethnic inequities.”

Colfax said that he and others have  “known that existing inequities in our system would be amplified” during the pandemic.

He reported that the city has opened COVID-19 symptom screening and testing sites in the Mission, including in the Castro-Mission Health Center and at SFGH.

He said that the Health Department is  also “coordinating with a new UCSF research study based in the Mission to learn more about the spread of the virus in the Latino community.” Colfax said that language support for immigrants will be provided in all of these programs.

Colfax noted that a lot of Latino patients are unwilling to participate in contact tracing and contact investigations.

“It is possible that they are fearful of local government, concerned about immigration, or simply don’t have all the information they need to be comfortable,” he said.

He wanted to assure immigrant residents that “immigration status has no bearing whatsoever on the work or whether people will receive care here in San Francisco.”

“We are, after all, a sanctuary city,” he said.

Colfax also announced that they have opened the city’s first field-care clinic in the Bayview area.

“This clinic will ensure that neighborhood residents have access to coronavirus testing, urgent care, and primary care for the duration of the pandemic, no matter how full the hospitals get,” he said.

Other updates from the 1 p.m. briefing with city officials

In terms of updates on outbreaks in the city, Colfax also mentioned that 96 residents—one more patient since Friday—at MSC South shelter are confirmed positive with COVID-19. This brings that total number to 106.

Another outbreak at the Central Gardens Convalescent Hospital in Japantown also came to light recently. Colfax said that the Health Department first learned of this “very serious outbreak” on March 30, and that there are 67 confirmed COVID-19 cases, including 39 residents and 28 staff to date.

He also said that the state oversees the facility and is the one taking the lead on investigating the cases there.

Breed reminded residents that there is still a moratorium on evictions and that power and water will not be disconnected for any San Franciscan.

“Ultimately, we know that the biggest challenge will be access to food,” she said.

Breed announced that the city has recently partnered with the Salvation Army to deliver meals to people experiencing homelessness. She said that 1,300 meals are delivered to 665 homeless individuals on a daily basis.

She also reported that the San Francisco Unified School District has distributed food to 319,000 residents. Almost 12,000 more meals were distributed through other city programs, including Open Project Hand. She reminded residents of additional food programs through the SF Marin Food Bank and Meals on Wheels as well.

Colfax said that the Health Department has partnered with the San Francisco African American Faith Based Coalition to inform and educate community members through their congregations” about food distribution in the city.

Later in the week, Breed is expected to discuss more details about Give2SF, a fundraising effort to support the city’s outbreak response efforts, which has already received $8 million worth of donations.

Davis, the director of the Human Rights Commission,  said that her department has allocated nearly $1 million for emergency funding to address food insecurity and racial discrimination.

She also said that it has distributed over 1,000 face coverings to residents in the Tenderloin and the Western Addition, and are in partnership with SFPD to distribute more masks in other districts.

This includes parts of the 5-Fulton, 9-San Bruno, 12-Folsom, 28-19th Avenue, 38R-Geary, and most of the 54-Felton. Muni is also increasing the frequency of trips for the L and N buses, and will add a 714 BART Early Bird Shuttle for early morning service workers.

Tumlin said that the agency is making these changes to increase access to transportation for frontline workers and residents who do not have any other transit options. Residents may keep track of service changes through the Muni website.

SFPD Chief William Scott reported that although most of San Francisco have been compliant with the city’s public health orders, the police have given 16 citations, to nine people and seven businesses, to those who have violated shelter-in-place and social distancing orders. The police have also given 67 formal warning reports and hundreds of informal warnings as well.

He also reminded residents to use Text-to-911 if they cannot make a call, especially for those who need to report cases of domestic violence. To use Text-to-911, send even an empty text message to 911.