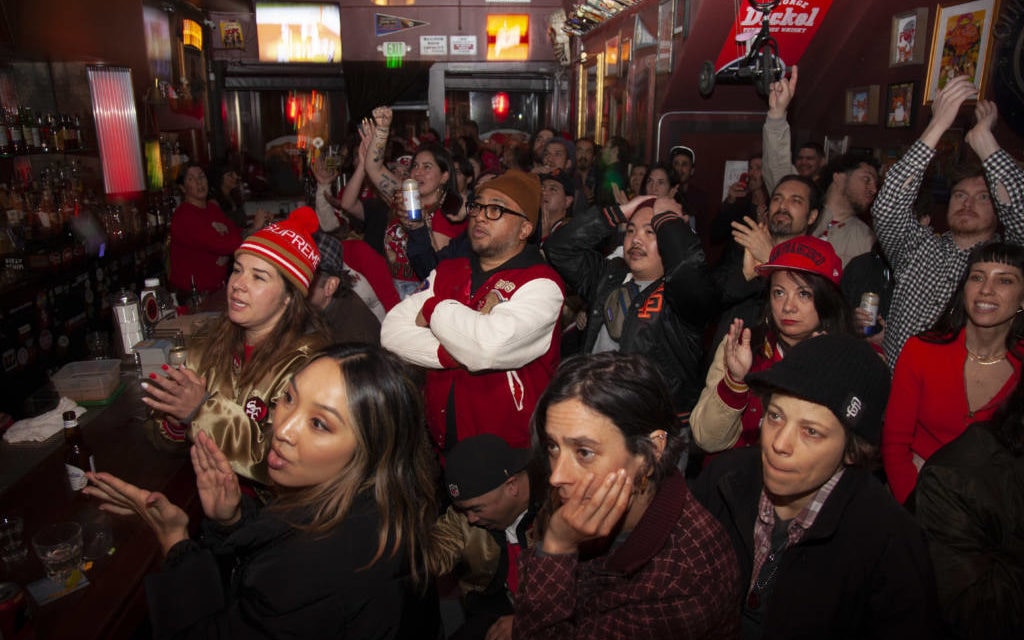 Going into the 4th quarter, the 49ers appeared to have an unobstructed path to victory and that elusive sixth Super Bowl title. They were up 20-10 following a 42-yard field goal by Robbie Gould, and then a 49er touchdown by Raheem Mostert that sprung out of an earlier interception. The Niners even had another clutch interception at the beginning of the 4th.

Seeing this, the city braced for a win — and bedlam on Mission Street. Buses were rerouted, the street was closed to cars, and droves of cops stood out on the street and hunkered down in restaurants along 24th Street.

Then the Chiefs broke out. Chiefs QB Pat Mahomes threw a 44-yard pass, allowing the Chiefs to come within three points of the 49ers. Then, once the Chiefs easily regained possession of the ball, a 39-yard pass that eventually led to a touchdown and a 24-20 lead. Then, a 38-yard touchdown by Damien Williams.

And, well, the 49ers fans at Pop’s Bar didn’t really want to talk about it. “I’m just tryin’ to watch the game,” said one man who didn’t give his name, clearly dejected, when asked what was going through his mind.

“I have friends from Kansas City, and I’m gonna have to cook them a very large meal,” said Michael Staton, 39. And — yes — he has to go to Kansas City to do it. “It’s almost like we had it, and I don’t know where it went wrong. Where did it go wrong?”

Tom Tierney, the owner of Pop’s Bar, said, “at the end I thought it was clock management.” The Niners, he said, were up 10 points, but perhaps did not slow things down enough with their lead.

“This will have a lasting impact on the 24th and York community,” he said. “They were waiting such a long time for the Super Bowl.”

Tierney, who hails from Boston and is first a Patriots fan (and second a 49ers fan), said that the Patriots right now are the 49ers of the ’80s. He said it “takes a long time to crawl back” and the diehard 49ers fans, especially those who he sees come to his bar, have waited out of the love of their team. “These people are faithful,” he said.

Jonathan Mendez, 21, said Richard Sherman, one of the 49ers’ key defenders was “hiding behind the curtains in the 2nd half.” Jimmy Garoppolo was also “just choking.”

“That’s all I could see,” Mendez said.

Over at Delirium on 16th and Albion, fans were more candid. “It’s over,” said one as he walked out of the bar.

“It’s fucking over,” agreed another.

“One minute and 12 seconds — it’s a wrap,” said Zoelle Evans, as she stepped out of Delirium. Evans, however, was sanguine about the impending loss.

“That was a good game,” she said and called herself “forever faithful” to the 49ers.

Earlier in the day on Alabama Street, fans gathered to watch the game. 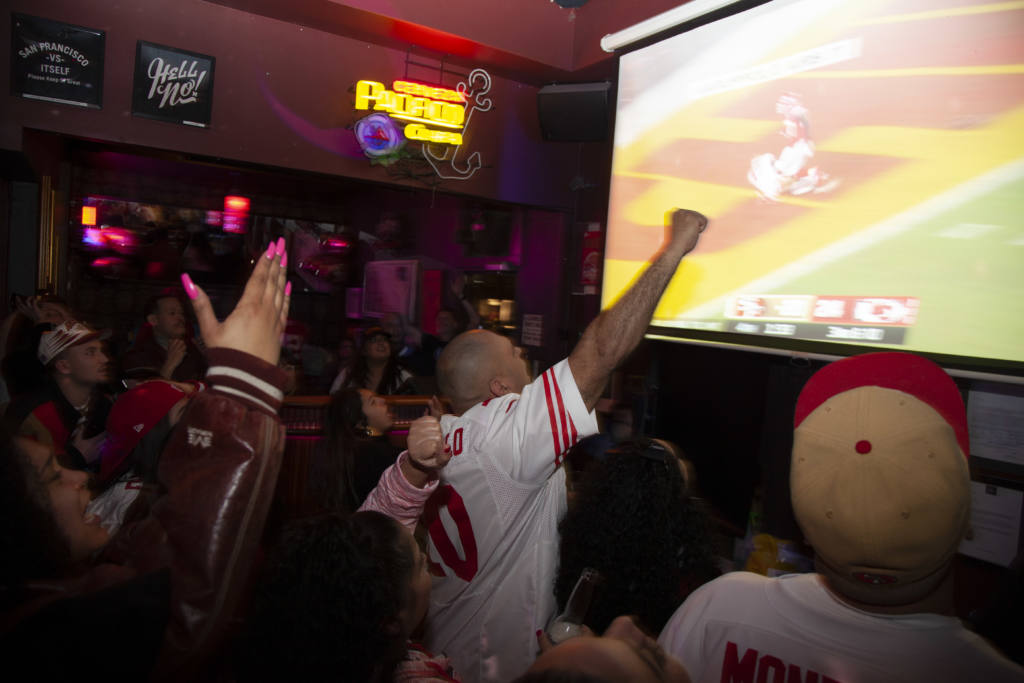 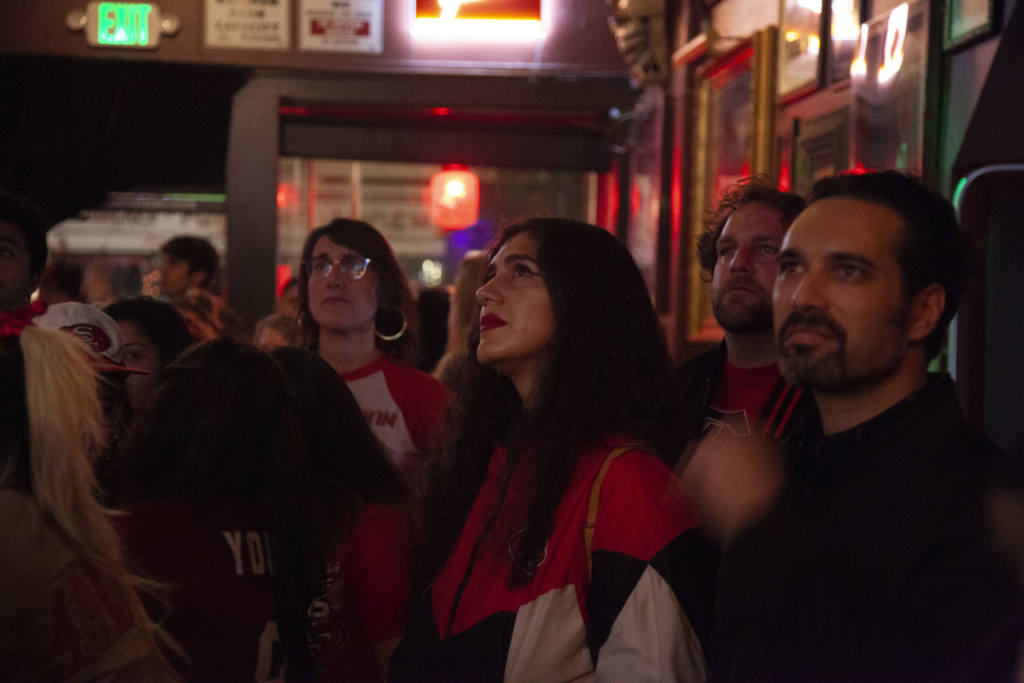 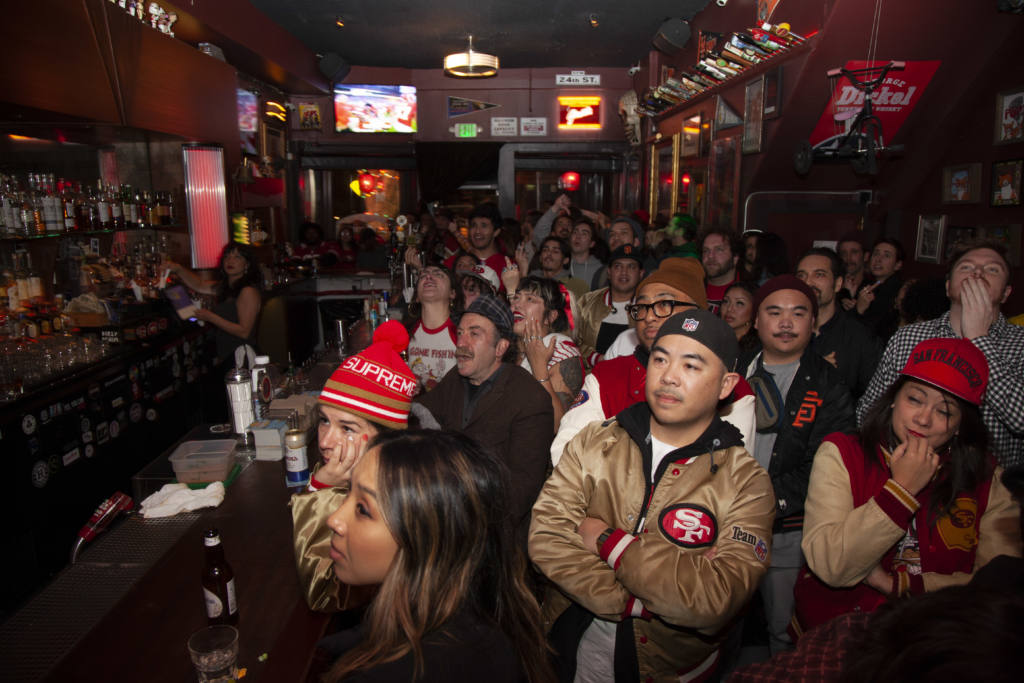