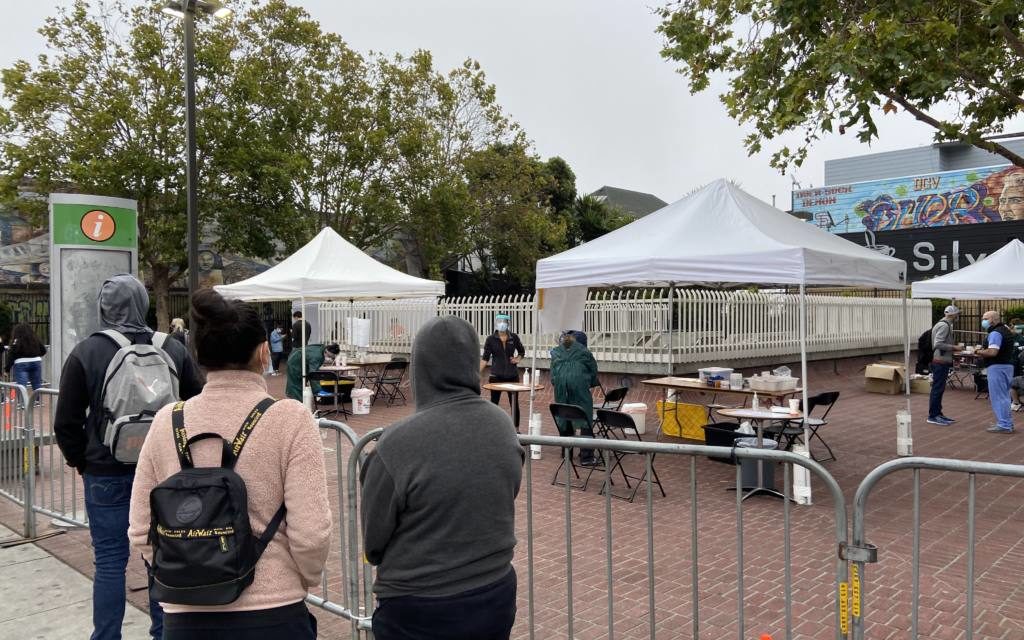 This COVID-19 testing site will run on Wednesdays and Fridays from 7 a.m. to 6 p.m. Workers on 24th Street, commuters, and essential workers will be prioritized. By Annika Hom on July 29, 2020.

Alison Chan’s job was to hand out debit cards equal to two weeks of minimum wage pay to San Franciscans with no paid sick leave or unemployment insurance.

In late August, as Chan moved to call another applicant, the applicant’s daughter answered. Her mother had tested positive three weeks earlier, she explained, but was still bedridden and experiencing symptoms. The daughter thanked Chan for news of the $1,285 she would be receiving. It would go a long way.

But the much-needed money wouldn’t arrive until mid-September, approximately seven weeks after the woman’s diagnosis. That turnaround time is unacceptable, according to public health experts, who said delaying assistance could increase the spread of coronavirus to the community. They said two weeks should be the longest anyone has to wait.

“The intention is to have the funds available when they can’t go to work,” said Diane Jones, a retired HIV nurse who has been assisting with UCSF’s pop-up testing sites. “The whole point is to identify people who need to self-isolate, to not transmit the virus.”

Right to Recover, which had $2 million in Give2SF funds when it began in July, is supposed to “encourage residents and workers to get tested for COVID-19 and not worry about economic hardship during isolation,” according to the mayor’s office. Ideally, this means transferring funds within two weeks of testing positive, the quarantine time Centers for Disease Control and Prevention recommends. These setbacks are critical because people are most infectious four days post-infection.

However, dozens of the 1,279 people who eventually got checks tested positive in July or August, but waited until mid-September or early October to get money.

The lag can be attributed to a convoluted procedure with hiccups at nearly every step.

It worked like this: positive patients were interviewed by the Department of Health and, if they had no financial safety net, they were added to a list kept by the Office of Economic and Workforce Development. Those lists are then passed on to community partners who contact recipients before the money can be sent. If the recipient is approved for a debit card, that can tack on extra days or weeks before delivery.

By the time community partners called to give recipients the money, many had forgotten they had even qualified for the program, said Tiffany Jackson, a Hospitality House employee that doled out Right to Recover funds. Though all $100,000 was finally claimed, six people still needed to pick up their debit cards by the second week of October.

Jones said this “bureaucratic” process caused Right to Recover to lose its function as a “public health tool.”

“I think they got lost in what the intention of the legislation was,” she said.

Then the city ran out of its original $2 million Right to Recover funds by August, which pushed thousands of Health Department referrals onto a waitlist and halted new registrations.

However, a recent $2 million donation has revived the program — and presents a second chance to roll out a “tightened” version of Right to Recover in the next few weeks.

The revamped process aims to give people money in one week, according to the Office of Economic Workforce Development, which oversees the program. This is key to addressing the pandemic, said Jones.

“Getting money is fine six weeks later; it helps back-rent,” Jones said. “But it did nothing to allow people to do the right thing and self-isolate.”

To avoid confusion about who is eligible and how the funds will be distributed, the staff of the community-based organizations will be planted at popular testing sites where need is high. This, said Santiago Lerma, the legislative aide for Supervisor Hillary Ronen who crafted the Right to Recover program,  should speed up the process and boost trust.

Gloria Chan, a spokeswoman for the Office of Economic and Workforce Development, said for the second phase, the Health Department “has built the capacity to call those who test positive within 24 hours” and those who go through her office will also answer in a day.

The Health Department did not respond before press time. This will be updated if and when they do.

And another major implementation misstep will be corrected in the second phase, Lerma said. The program neglected to carve out compensation for community partners, causing them to spread out staff and resources to carry out their end in making calls.

For example, Alison Chan, who already oversaw 13 programs at Self-Help for the Elderly, was the only person dedicated to Right to Recover. “I don’t want to really use up too much of my staff’s time. It’s time-consuming,” Chan said, who still had pending applicants in October.

Hospitality House had only three staff on it, including Jackson. Mission Economic Development Agency was another major partner in charge of $900,000, and had a small team that made calls three days a week and delivered money two days a week.

“I think it was just figuring out the best process. The devil is really in the details,” said Ernesto Martinez, who handles Right to Recover for MEDA. “We have gotten much better at getting through that, but those are the key improvement areas that we are getting to right now.”

Lerma said for the new $2 million, participating partners will receive about $100,000 in administrative fees. “We really aim to fill in the gaps and make it more efficient,” he said. It will also help another approximately 1,550 people before it’s exhausted.

Though the first round had kinks, it also helped some of the city’s most vulnerable. Some 70 percent of recipients lived in underserved neighborhoods and 64 percent spoke Spanish as a first language, which indicates that the money reached who it was intended for.

This new and improved process seems to be working. Eleven out of 14 people referred at the 16th Street pop-up in late September got their money by Oct. 6, Jones said.

“The Department of Health referred 4,000 people, it’s humbling,” Jones said. “I shouldn’t be kicking and screaming, but you have to keep advocating for solutions.”

This is welcome news for families who are missing work and are waiting for that money, like a Mission woman Jackson met at Hospitality House.

Jackson called her about Right to Recover in late August, about two weeks after her diagnosis. Both her kids and her husband, tested positive. Neither she, a fast-food worker, nor her husband  a construction worker, were working.

She was grateful to pick up the money in mid-September.

If you would like to donate to the city’s Give2SF fund that supports programs like Right to Recover, do so here.

We don’t just report the news, we explain it. Support Mission Local here.