UCSF Grand Rounds: Did Trump leave the hospital too soon? And, was his giddy tweetstorm driven by steroids? 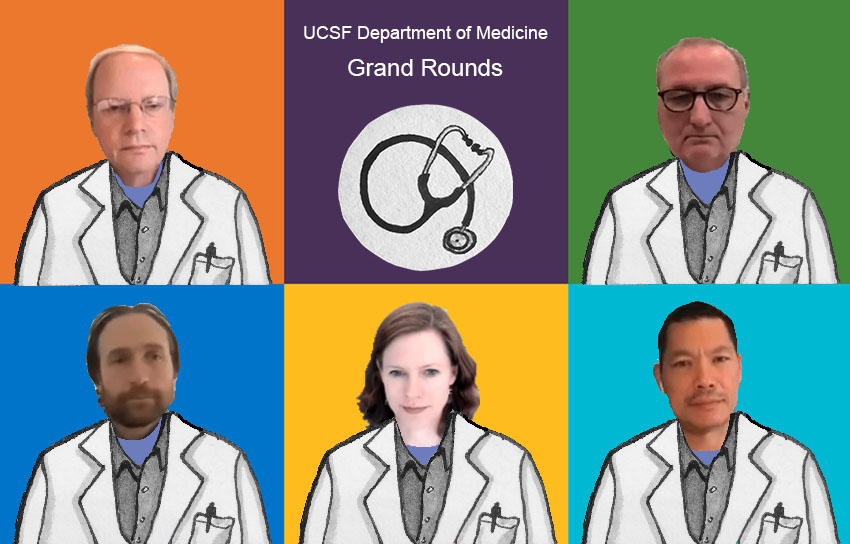 Last Thursday’s news that President Trump and the First Lady tested positive for Covid-19 incited a lot of chatter from the American public, including medical experts like Grand Rounds moderator Dr. Bob Wachter. On Tuesday, he broke down what the public knows so far and assembled four experts to offer their two cents on how the White House doctors responded.

When did Trump likely get infected, and could it have been prevented?

People are calling the Rose Garden ceremony a “super-spreader” event, because the lack of precautions possibly resulted in multiple people testing positive, including a slew of our nation’s leaders.

Dr. George Rutherford, professor of epidemiology and biostatistics, also believes that the Barrett nomination was probably “Day Zero,” or the day when Trump got exposed.

Masking up was one way to prevent “a number of cases” by limiting the transmission of infectious viral particles. He called the ensuing infections “avoidable bad luck.”

“How much you talk amps up the number of viral particles and droplets you shed,” Rutherford said. “The more and closer you talk to people, that will amp up the risk.”

So, was Trump most infectious as early as Sept. 26? Rutherford finds it unlikely.

The coronavirus has higher levels of virus by the third day, which is usually when a PCR test can detect it and confirm positivity. Between days four to six, patients are at their most infectious. However, many don’t develop symptoms until day five, if they develop symptoms at all.

“He became hyperinfectious on Wednesday, and then symptomatic Thursday is how I would string it together,” Rutherford said.

Dr. Chaz Langelier, an associate professor of medicine, explained that the problem might lie in the infrequent use of rapid tests.

Though these tests, which the White House used, “can still make a big impact in curbing the pandemic,” they are less sensitive and need more viral loads to detect. PCR tests are currently the “gold-standard” for detecting smaller viral loads, though even those can potentially produce false negatives if administered incorrectly.

Dr. Peter Chin-Hong, who is a UCSF clinical expert on covid, said that, considering most hospitalized patients usually require oxygen, he would have taken the president and set him up with oxygen and monitored his kidney and liver functions.

And, as the Washington medical staff did, Chin-Hong would have given Trump the antiviral medication remdesivir.

Trump’s doctors also gave him a steroid, dexamethasone, to control the drop in his oxygen levels, a decision Dr. Chin-Hong disagreed with.

Although dexamethasone has proven effective against covid, according to the National Institutes of Health, White House doctors may have acted too soon, Chin-Hong said.

Chin-Hong said that oxygen levels often dip in coronavirus patients, but mild cases of covid can make the effects of dexamethasone “potentially harmful.”

The president additionally consumed a “cocktail” of monoclonal antibodies. Like several other viral diseases, covid patients create antibodies when fighting off the infection.

Dr. Annie Luetkemeyer, professor of HIV, infectious diseases and  medicine, explained that some labs have tried to recreate their own versions — monoclonal antibodies — to bring down the viral load.

The president’s cocktail was a combination of two of those. The doctor noted that the mixture has not yet been approved by the Food and Drug Administration.

“While monoclonal antibodies are new for covid, they’re not new for many other diseases,” Luetkemeyer said. “We use them in cancer and rheumatology and infectious diseases.”

She noted that the biotech companies closest to finding potentially effective monoclonal antibodies are Lilly Biotechnology Center and Regeneron Pharmaceuticals. The latter created Trump’s therapy mixture. Early data suggests that Regeneron’s synthetic antibody has potentially lowered the viral load for patients who are sick with covid and don’t need hospitalization.

“That’s exciting news. That’s what we want to see,” Luetkemeyer said. “This is really more of a proof of concept, so that you can take this on to phase two and three studies.”

Other medicines Trump reported taking, including zinc, Pepcid, and Vitamin D, are likely to neither help nor hurt the situation, according to Luetkemeyer.

Was it too early to leave Walter Reed?

On Monday, Oct. 5, Dr. Sean Conley gave the okay to release Trump, noting that he was stable, no longer needed oxygen, and would continue receiving doses of remdesivir. Yet monitoring the President’s public appearance on television since his diagnosis, Chin-Hong said he doubts Trump no longer requires oxygen.

Sometimes patients neglect their need for oxygen when they no longer feel short of breath. But this can lead to silent hypoxia, when the body doesn’t have enough oxygen, “which is one of the perils of covid” Chin-Hong said. Thus, he would have kept the president in the hospital.

But if the president actually needed no oxygen and was stable, Shin-Hong would have sent him home with specific instructions to isolate. This, he said, is unlikely to happen in the “congregate setting” of the White House.

Trump left the hospital on Monday, and punctuated the discharge with an optimistic tweet: “Don’t be afraid of Covid. Don’t let it dominate your life … I feel better than I did 20 years ago!”

Chin-Hong and Rutherford agreed the “ruler of the universe” attitude comes from steroid intake and could explain Trump’s particularly cheerful attitude.

Getting the White House in order for debates

Vice President Mike Pence and his wife tested negative for coronavirus, and Pence plans to proceed with the vice presidential debate on Oct. 7. Rutherford said that if he repeatedly tested negative, as some tests may produce false negatives, then it should be safe. Pence battles Sen. Kamala Harris, who also tested negative.

It was noted at the Presidential debate Sept. 29 that former vice president Joe Biden and Trump were facing off while standing 12 feet, six inches apart. Biden tested negative.

And it looks like the president looks forward to his next chance in the spotlight, too.

“I am looking forward to the debate on the evening of Thursday, October 15th in Miami. It will be great!” Trump tweeted Tuesday.

This was corrected on Oct. 7, 2020 to point out it was “hypoxia” that is a peril of covid, not “hypoglycemia.” We regret the error.