The line for food in the Mission stretches, twists and doubles back for 14 blocks 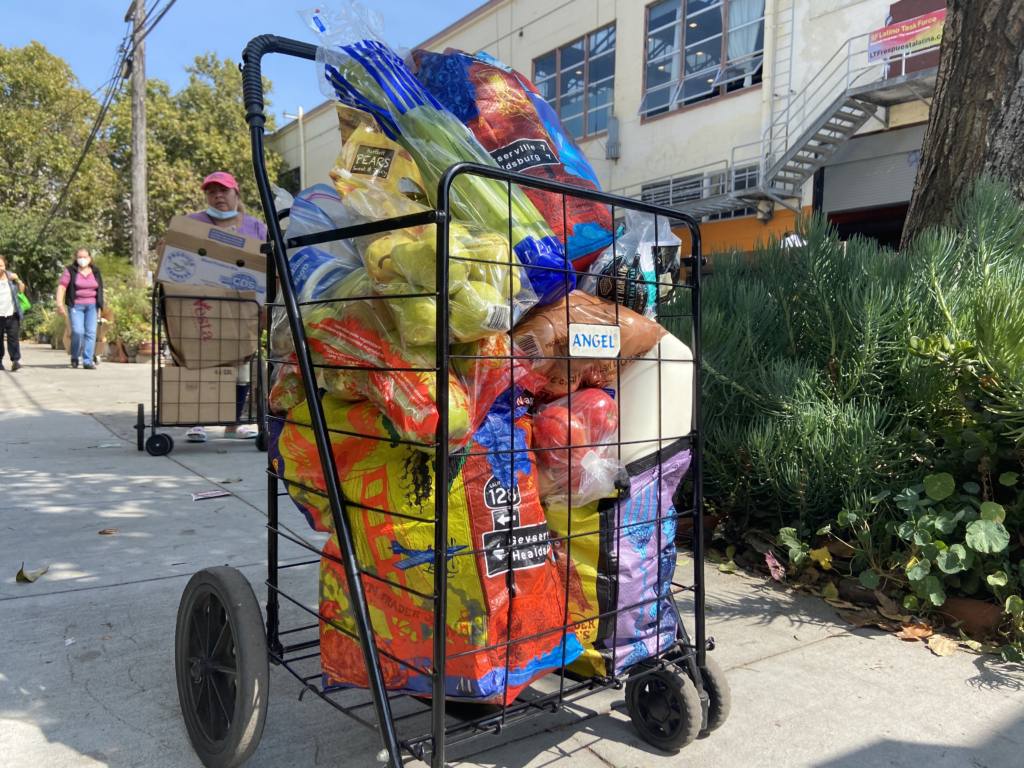 A cart full of food from Mission Food Hub. Photo by Clara-Sophia Daly

Even though everyone knows the distribution of food boxes doesn’t start until 10 a.m., the line at the food hub run by the Latino Task Force every Monday, Wednesday and Friday begins to form at 6:30 a.m.

By the end of the day, approximately 2,000 heavy boxes full of food are sent home to people in need. By the end of the week, 7,000 boxes will be distributed. When people get in line for food, a volunteer hands them a numbered ticket which helps to keep track of the number of boxes given out, as well as ensures that people stay in their spot in line and do not receive multiple boxes of food.

The lines on a recent Wednesday created an astonishing maze through 14 blocks. 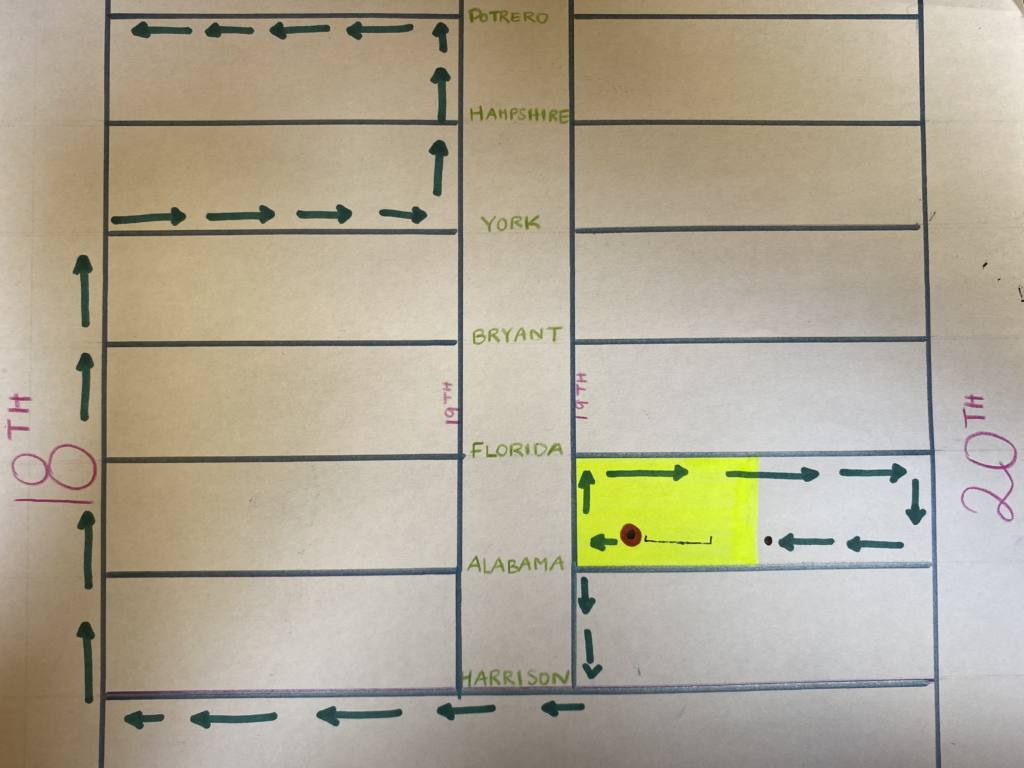 It’s a friendly line, said Alondra Gallardo, who has been volunteering since June. “The families will take a bus or BART to get there, but the boxes are heavy, so people will give each other rides home. Children help by holding heavy gallons of milk or potatoes … people are friendly with each other in the line.”

Here are some stories from the line. 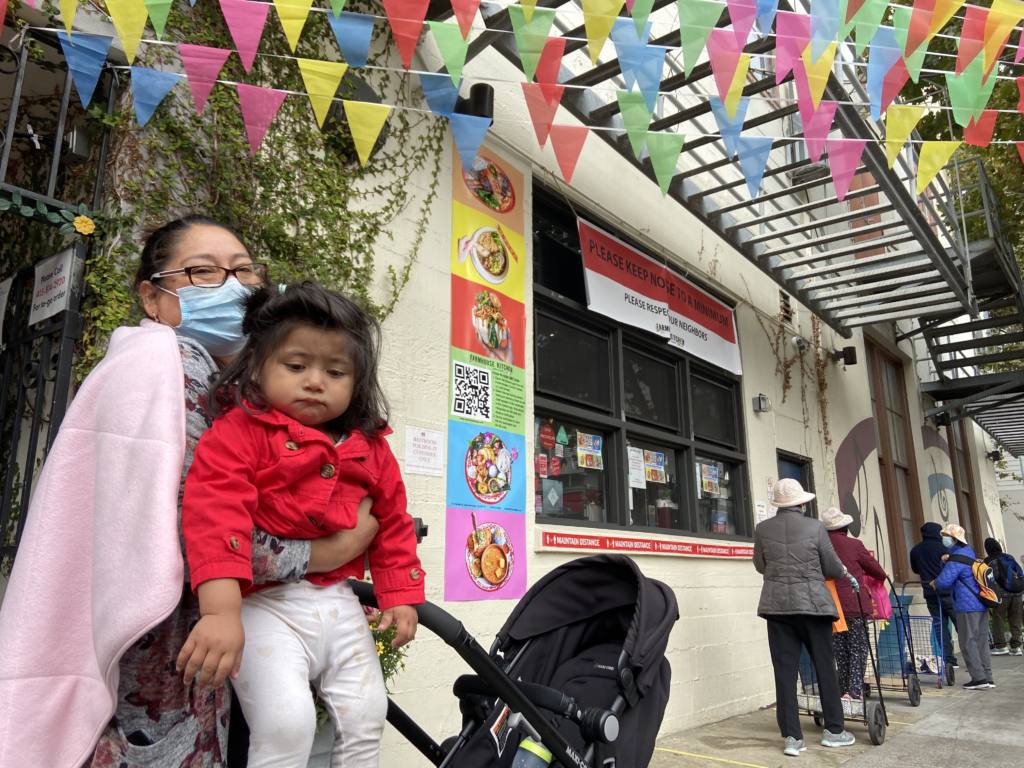 “If I don’t come to ‘El Banco de Comida,’ nobody will bring this food to the house. Nobody. … Because we are all suffering in the same way. And if we do not come, we will not eat,” said Gilda Lopez in Spanish, whose box on a recent Wednesday was filled with beans, rice, apples, onions, milk and potatoes.

Lopez is grateful, but wishes the box had more meat and child-friendly foods like flavored yogurt and ham or sausage. “We need more sausage and meat, and wipes and diapers for our children, which are very expensive,” she added, explaining that she depends on the box. While her husband is working two or three days a week fixing espresso machines, it’s not enough to make ends meet.

She has three children  to feed – ages 14, 16 and eight months – and the older ones are completing their classwork from home. “‘Mom, can I have yogurt? Can I have cereal?’” they ask through the day.

As is the case for many Latinx families, space is a challenge.

In the morning, Lopez clears out her own bedroom so her 16- year old can complete his schoolwork. Her 14-year-old works from the other bedroom, and she tries to take her eight-month-old on long walks during the day to keep the house quiet.

My children are doing their homework, she says, but the Zoom classes are not the same as being in school and for the first time in the 16 years she has lived here, she wonders if it might not be easier back in Guatemala. “”There, you can at least grow your own food,” she says. “I used to say the U.S. is the best, but now it is very hard. It’s hard, hard, hard. The rent is high and there is no food and no work”

“I imagine that everyone is here for the same reason,” said Lopez surveying the long line. The people who have more money, I’m sure they can buy food. But we are the people with low resources and we are affected a lot by the pandemic. I have not had breakfast, and neither has Daniella, my daughter. But we are going to get the food and have breakfast when we’re home.”

The box of food, she says, “really helps.”

Standing in the line with Lopez is her friend Laora, who worked as a nanny for the children of two UCSF doctors, but lost that job back in March when Covid-19 shut down the city.

The timing was particularly bad because, at the same time, her husband suffered a stroke and remains at Sutter Health’s Davies Campus Hospital. “It became difficult, so I came here to get this help. There is no work, because people don’t want people to care for their babies because of the fires and also because Covid. It is very difficult to look for work.”

It is the second time she has come all the way from her home in San Bruno. 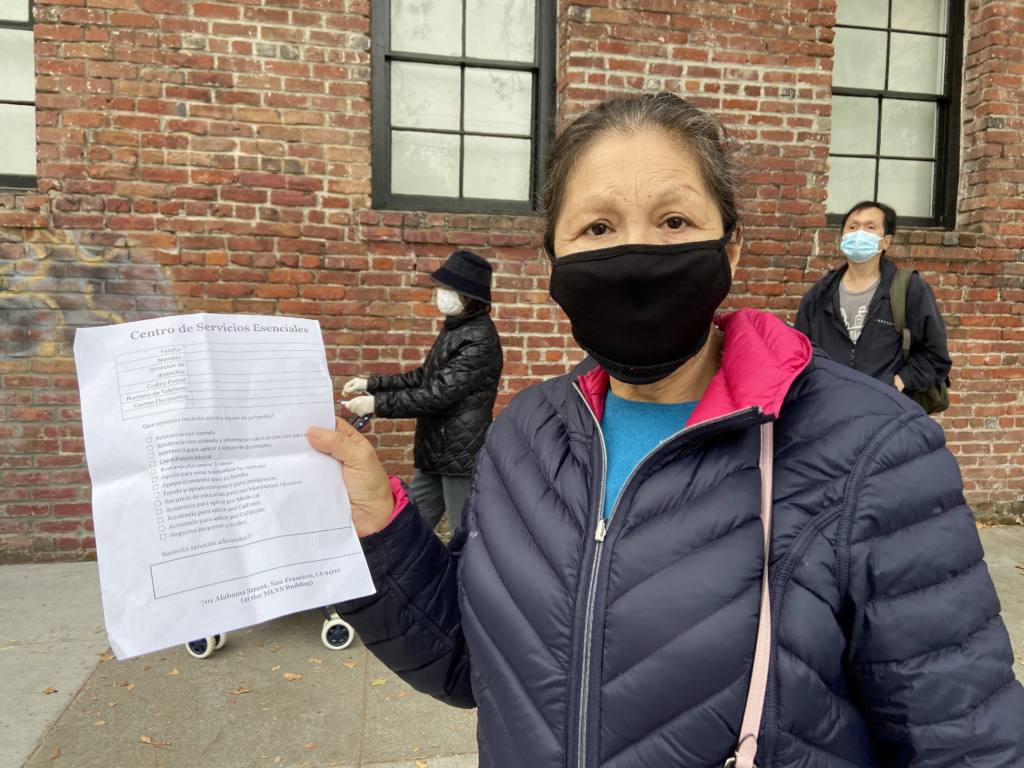 Maria Marquez, a 60-year-old grandmother who has been living in San Francisco for 40 years, used to make a living babysitting her three-year-old grandson. With the pandemic, her 26-year-old son lost his job. So, he cannot afford to pay her anymore.

She’s lucky to own her own home in San Francisco, but the bills pile up: electricity, water and garbage. She likes to come to get food because she gets a big bag of masa, or ground corn, that she can use to make tamales and enchiladas with a chile salsa on top.

I learned to cook traditional Mexican food growing up in Mexico, she says with pride, and then tears up. “My life has changed a lot. It has gotten really bad, since losing my job.”

But, she is hopeful, and shows me hers the application for CalFresh, the state’s food assistance program. 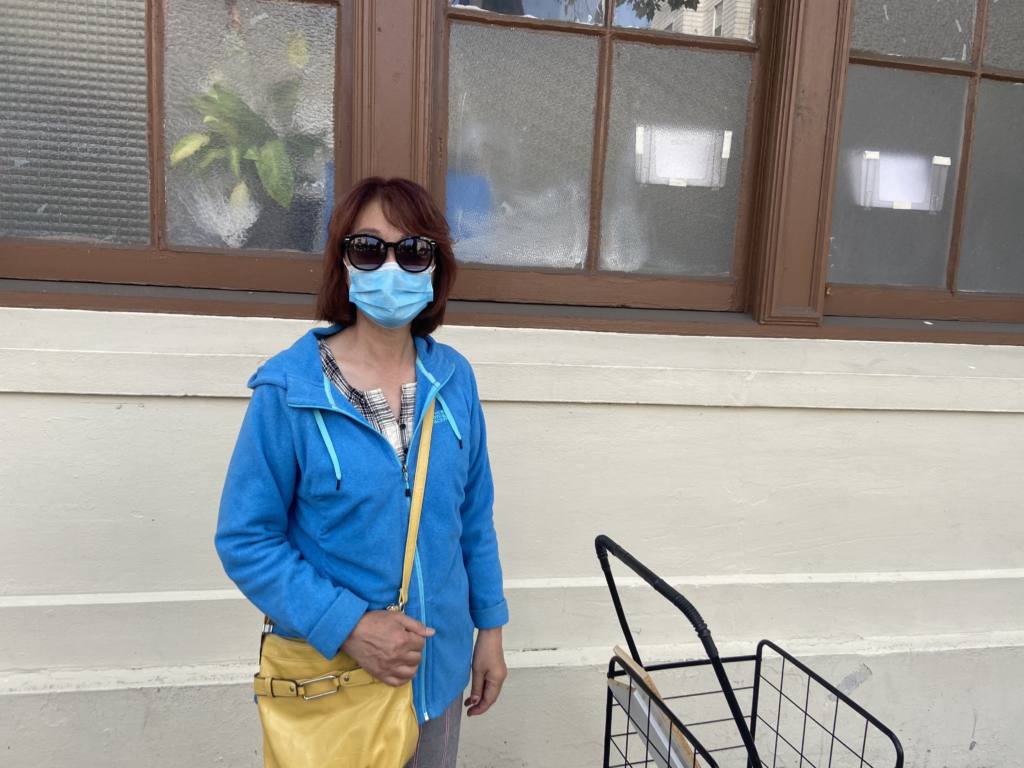 On another day and another long line, Xiuyun Zeng is waiting for her box. She looks middle-aged, but is actually 67 years old and has lived on 18th Street for ten years. Zeng retired as a post office worker in 2007. “When I was diagnosed with cancer,”  she whispers.

Originally from Hong Kong, she has lived in the United States for 32 years and raised her now-adult daughter here. She has been coming to the The Hub to get food for four months now. At 7:30 a.m. she walks over to get a ticket number, goes home for breakfast and then returns to the line where she will get back in line for another 2 and a half to 3 hours. Zeng repeats this routine two or three times a week.

If she has extra, she says ,“I share it with my sister.”  She likes coming to get food here, as the food is great and she can meet up with her two friends. Early on, they had a different line for seniors, but stopped that. She remembers that once in that line they asked for her ID.  “They didn’t believe I looked old.” 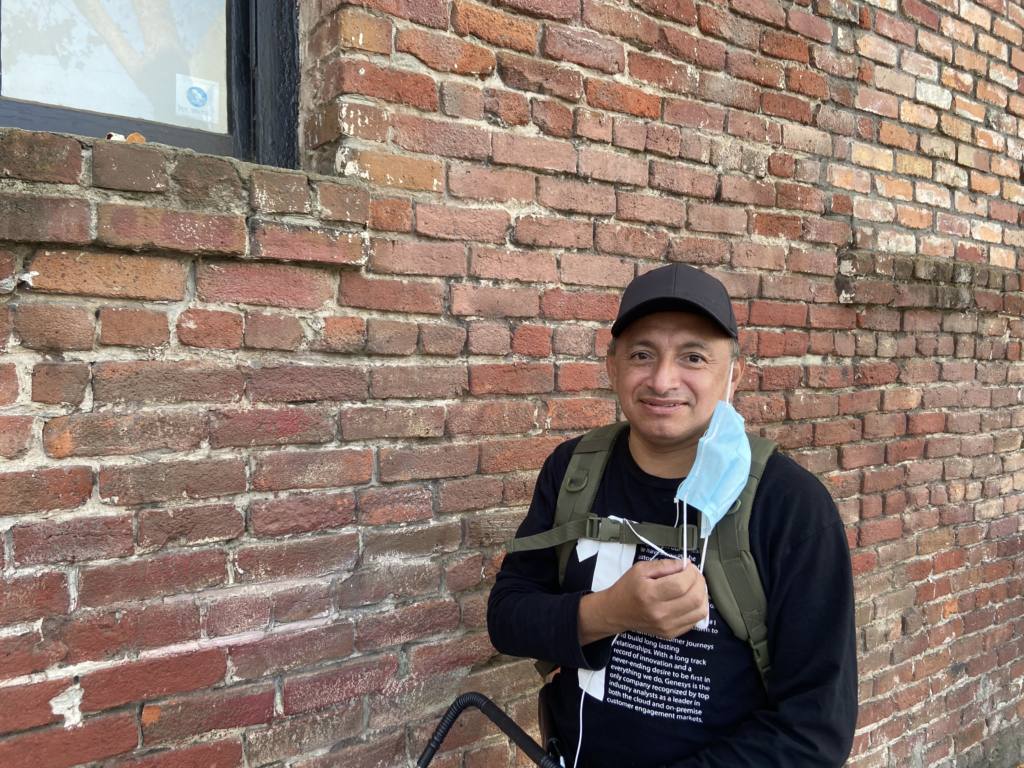 Wilberth Lopez is a 52-year-old who is also out of work because of the pandemic.  He has lived in San Francisco for 32 years and most recently was working as a bartender and bar back at Johnny Foley’s Irish Pub.

“Since I lost my job because of covid, I don’t have work or money. A lot of people are suffering because of the pandemic and wildfires, so this is a big help.”  Lopez doesn’t mind waiting in line for up to 3 hours, as he “has nothing else to do.”

In fact, he comes twice a week. The food is really good, he says.

This story was supported by the Pulitzer Center for Crisis Reporting. If you would like to support Mission Local’s reporting, please do. 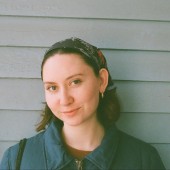