The Great Burger War stops at West of Pecos 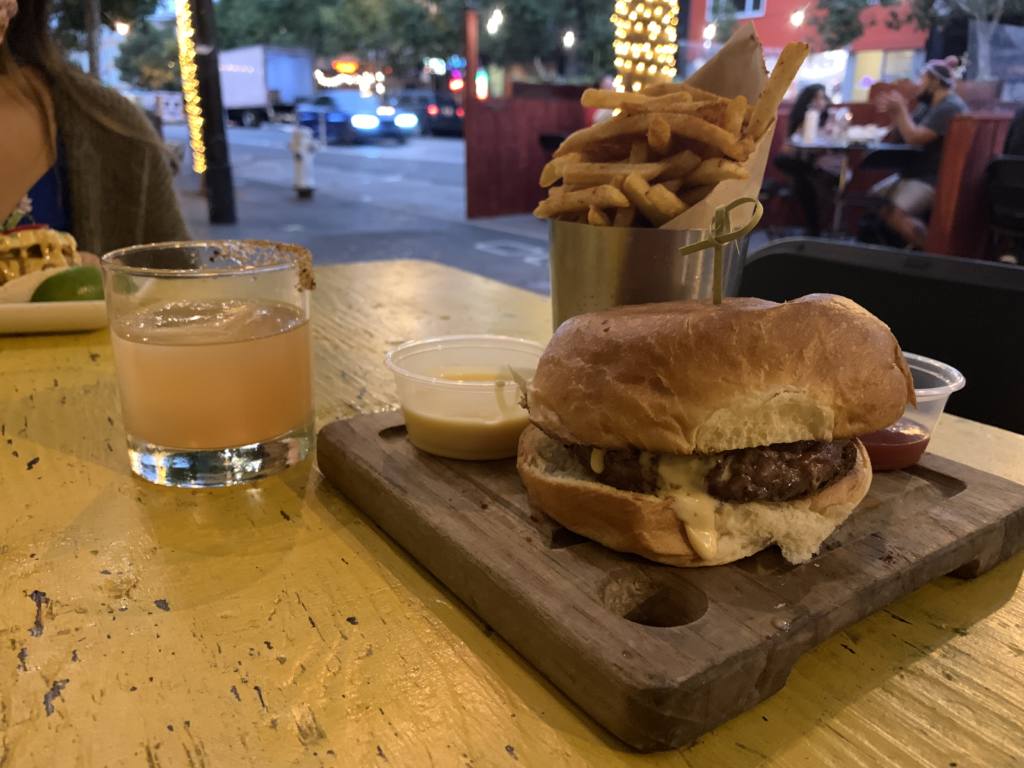 The burger at West of Pecos. Photo by Julian Mark.

Julian, (early) 30-something, and Mark, 70-something, are out to find the Mission’s best burger. If you have suggestions, write a comment — or email julian.mark@missionlocal.com. You may remember the duo from the Fried Chicken Showdown series.

I approached the burger at West of the Pecos with no small degree of dread. Your youth and optimism may make it hard for you to understand, but after countless playoff games against the arrogant Dallas Cowboys and the insufferable Houston Rockets, I’ve developed a distaste for all things “Texas.”

I was relieved to read Maria’s recent piece referring to the place as a “Tex-Mex”  joint. And whereas many “varmints” inhabit Valencia Street, no one I know has ever been stung by a scorpion there. So I put aside my biases and ordered their “Green Chile Queso Burger.”

It’s the only burger on the drinks-first menu.

West of the Pecos offers a healthy-looking patty; not overweight, but not undernourished. I ordered it medium rare and it came back relatively pink. But definitely not juicy. Nor was it what I would call “beefy.” What then? A word Maria used popped into my mind: “bland.”

It needed something. Green chiles and cheese would do the trick, right?

Wrong. Instead of a slice of melted cheese and a couple of thick chiles, it was cheese dip; a soupy kind of cheese dip with a few tiny chunks of chile swimming around inside.

Not weird at all, a refugee from Texas told me later. That’s the way we Texans like our burgers. Velveeta works best, she said. The cheese could have been Velveeta; I don’t know. But combined with minimalist chiles, it added nothing to the burger.

In addition to cheese dip, West of the Pecos supplies a special sauce. A pinkish aioli, slightly tangy and spicy. It made a difference. Not a big difference, but once I added the sauce, the burger seemed to wake up. Although not transformative, it made eating the ensemble seem worthwhile.

The burger comes with a brioche bun and fries. Though unremarkable, the bun bravely stood up to the cheese dip and sauce throughout the meal. Not so much the droopy fries that seemed bored and tired by the time I got them home. “Eat us if you must,” they drawled, “then let us alone.”

At best, a respectable bar burger. I’m sure you will agree: West of Pecos won’t be a contender.

If you approached West of Pecos with “no small degree of dread,” why did you choose it in the first place?

Surely, we don’t have to take every reader’s suggestion. And when you said West of Pecos was on deck, I was filled with actual, super-sized dread. I didn’t want to be faced with the option of taking a dump on the brainchild of the MacNiven brothers, whose small culinary empire has not precluded them from being genuinely nice guys.

But, unfortunately, a dump I do have to take.

At best, the queso burger — bun, patty, queso, and that’s it — is a souped-up Fuddruckers burger (coincidentally, Texas burger chain) that reminded me of a suburban Sunday afternoon after church. But I’ve since recovered from Catholicism and, with it, the Fuddruckers special. And, thus, there’s no salvation here.

I ordered the patty “medium,” yet as with many of the burger joints in the Mission, there was no pink, and I wondered why bother providing this option? The “green chili” was very hard to find and really left only the “queso,” an element that would have been fun had there been other accouterments accompanying the burger. (Fuddruckers at least has a self-serve accouterment bar, with literal cauldrons of chili queso you can pump — or not pump — all over your burger.)

Then, the death blow, as pointed out by my burger buddy E: “When the buns touch at the edges, the bun is too big — and there’s not enough stuff inside.”

That was the case here.

In other words, the queso burger at West of Pecos is a lazy showing — and not at all worth the $14. To make this burger shine, you probably need pitchers of margaritas, which run $46 apiece. And that, to me, sounds far from “respectable” — and closer to the gimmicky antics of a roadside attraction you’re better off skipping.