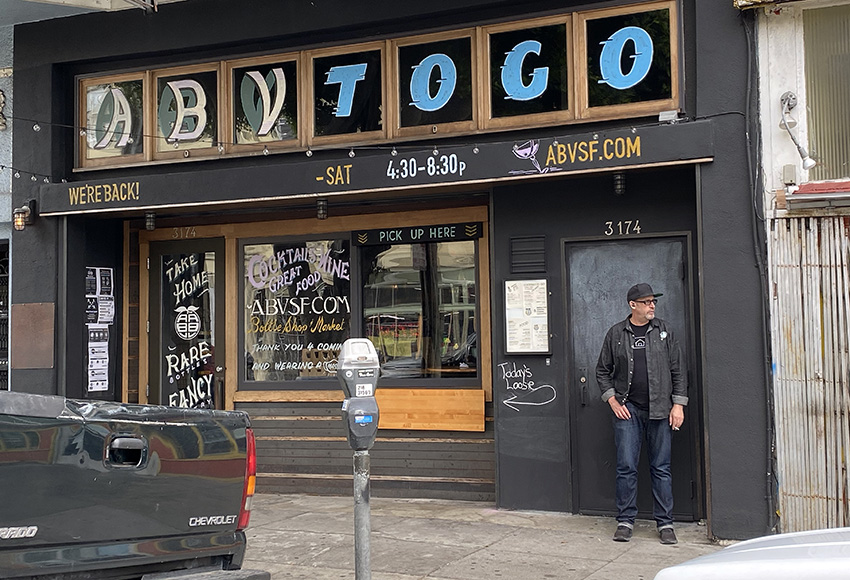 Julian, (early) 30-something, and Mark, 70-something, are out to find the Mission’s best burger. If you have suggestions, write a comment — or send to julian.mark@missionlocal.com. You may remember the duo from the best fried chicken sandwich series.

The bar at 3174 16th St is also included in many of the city’s “best burger” lists. And with ABV now open for pick-up and delivery, it was very much the natural successor in this series to the much-touted Mission Bowling burger, which we reviewed two weeks ago.

Sometimes, my editors tell me to “write around” difficult language or jargon — maybe, language that could be offensive to the 50-and-over crowd. But no matter how much I tried, I couldn’t write around the one thing in this world with which to compare the sensation of eating the burger at ABV: Orgasm.

And not only the intense metaphysical — and perhaps even straight-up physical — bout of yodeling from the mountaintops 29,000 feet above sea level, but also the intense sense of calm and clarity that follows.

Now, Mark, a little bird told me that you were not totally satisfied with your ABV burger, preferring the stripped-down — dare I say, homely — vibe of the Mission Bowling burger (compared the obvious sex appeal of ABV).

All I can do is echo your friend Marcel Proust: “Let us leave pretty women to men with no imagination.”

Perhaps you are a man of imagination, Mark. And perhaps you really need that imagination when eating a burger.

I, for one, don’t want to imagine beauty.

And the ABV burger is a beautiful burger — with its glossy, bao-like brioche bun, perfectly seared and medium-rare patty, and thinly sliced, meticulously stacked veggies. It’s no surprise that ABV, among the standard-bearers of San Francisco mixology, created the burger equivalent of a craft cocktail, which introduces each flavor in its correct order.

The beef patty was like a great cookie: crispy on the outside and progressively raw as you get toward the center. The cheese, white cheddar placed on the bottom of the patty, oozes out and smacks the senses like a Mack truck backing into a garage at 120 MPH. Then, the palate is cooled down by the pickles, tomatoes, and onions. All of that is topped off with the “special sauce.” I hate that term, but the sauce (whatever it was) introduced the right spice and tang and pretty much brought everything together in an oh-so special way.

So when my housemate E asked if I’d go back for another, well, my “heart was going like mad and yes I said yes I will Yes.” 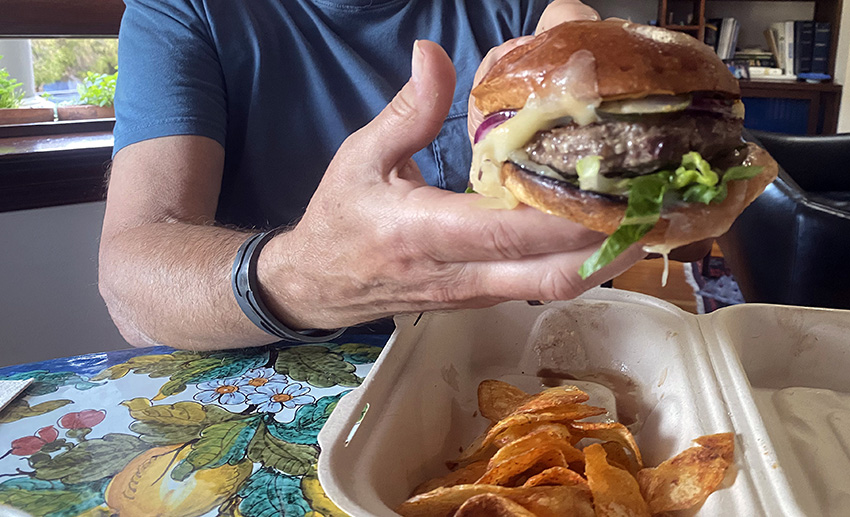 I have one word for you, Julian.

It is aptly defined as “a preparation to accompany food,” “something which adds piquance or zest.”

Sauce, or sauciness, can imply impudence, or in more archaic days, a kind of shamelessness or “lack of modesty”.

Even a suggestion of sex.

Maybe one goes to a bar hoping for sex, but who expects to take a burger to bed?

In the ABV burger, the “special” sauce bulldozes everything in its path, beginning with the ground beef. I could feel the meat on my tongue, so I knew it was there. When I looked, I could see it was medium-rare. But taste it? No way.

Same with the cheese, lettuce and pickles. I could sense their different textures, but drowned out by the sauce, I couldn’t taste them.

A symptom of covid-19?  Should I get tested? Nope. I could taste the sauce. And don’t get me wrong. The sauce tasted good! Piquant. Zesty. Tangy and spicy.

But who orders a sauce sandwich? BTW, you can’t ask for the sauce on the side. You want the burger, you get the sauce.

We don’t live in Paris where people prostitute themselves to sauce and wind up with gout. We live healthy lives in a foggy little dune town where we expect our sauces to accompany, compliment, add value, highlight and enhance the main dish.

In the ABV burger, roles are reversed.

So besotted were you by the sauce, you forgot to raise the “no fries” warning. The ABV burger comes with a side of spicy chips (“crisps” for our British readers). Not bad. They may be added incentive for another drink, but what do they add to the burger? Zilch.

And the bun? Haha. No bun stands a chance against this saucy onslaught. Halfway through, the bun had given up, retreating into a mass of flabby dough.

Listen to your editors, Julian. You’re writing a burger column, not Molly Bloom’s soliloquy — a surprising allusion. But though I understand men your age can rarely go for five minutes without thinking about sex, a trusted burger critic doesn’t let sentiment overshadow the fundamentals: meat and potatoes.

As for Proust, he came by his orgasms the old-fashioned way, not by picking them up at 16th and Albion.

Next up: West of the Pecos