Sideshow screeches and spins on 24th and Bryant on Sunday 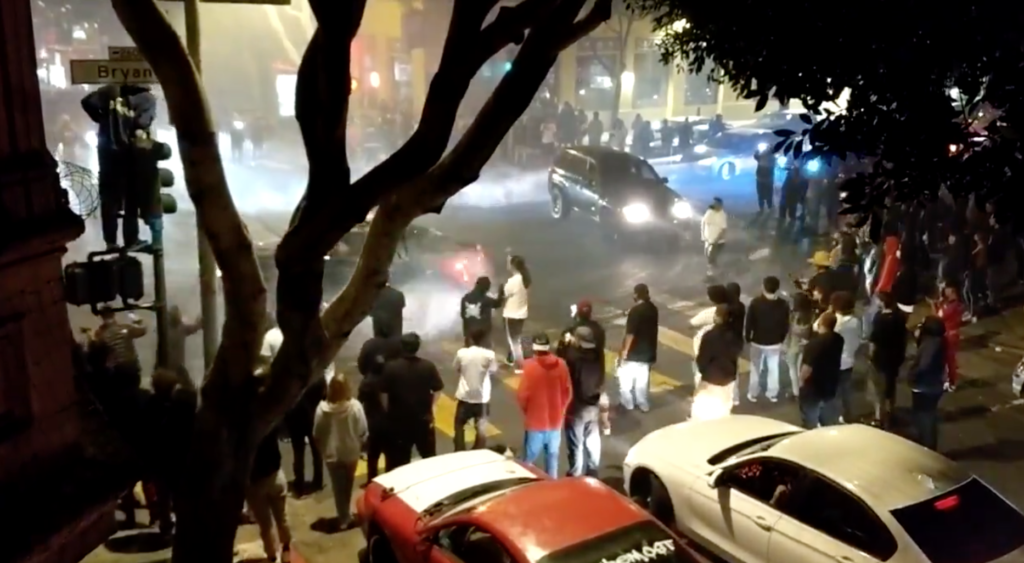 The intersection of 24th and Bryant streets was the scene of a “sideshow” early Sunday morning as cars performed donuts, screeching their tires and sending burnt-rubber smoke up into the air as a rowdy group of more than 100 looked on.

A video of the sideshow shows cars crowding the intersection and a throng of people appearing to cheer the spinning cars. Some of the cars had people hanging out of the windows as they orbited the intersection. Others seemed to graze the onlookers. In the video, a car doing donuts appears to momentarily lose control and run into a group of onlookers who are forced to back up.

San Francisco Police Department spokesman Officer Adam Lobsinger said that, at 2:37 a.m., officers responded to the intersection to “reports of an illegal sideshow.” When they arrived, officers found roughly 60 vehicles blocking all lanes of entry to the 24th and Bryant intersection.

“Officers could hear the sound of screeching tires and observed large amounts of smoke emanating from the intersection of 24th and Bryant Street,” Lobsinger said.

He also said police received a “shot spotter” alert for the area, meaning someone may have fired a gun. More officers arrived, and the sideshow participants disbursed, Lobsinger said.

“Participation in sideshows is unacceptable and puts the public in danger,” he said. “It is common for sideshow participants and attendees to possess weapons and operate their vehicles in extremely dangerous manners, which poses a significant safety risk to the public.”

“Sideshows are prolific throughout the Bay Area and often result in shootings and major bodily injuries,” he added.

He did not say if anyone was arrested, and did not report any injuries. Lobsinger asked anyone with information on this sideshow to call the police department.

In late February, at least 100 vehicles participated in four sideshows across the city, with one at 23rd and Dolores streets. A month earlier, on Jan 6, a spate of sideshows  took place throughout the city, including at 24th and Bryant.

In January, Chief Bill Scott told Mayor London Breed in a text message that SFPD has been in touch with the Oakland Police Department regarding the sideshows, “as we believe the sideshow participants are active today on both sides of the bay.”