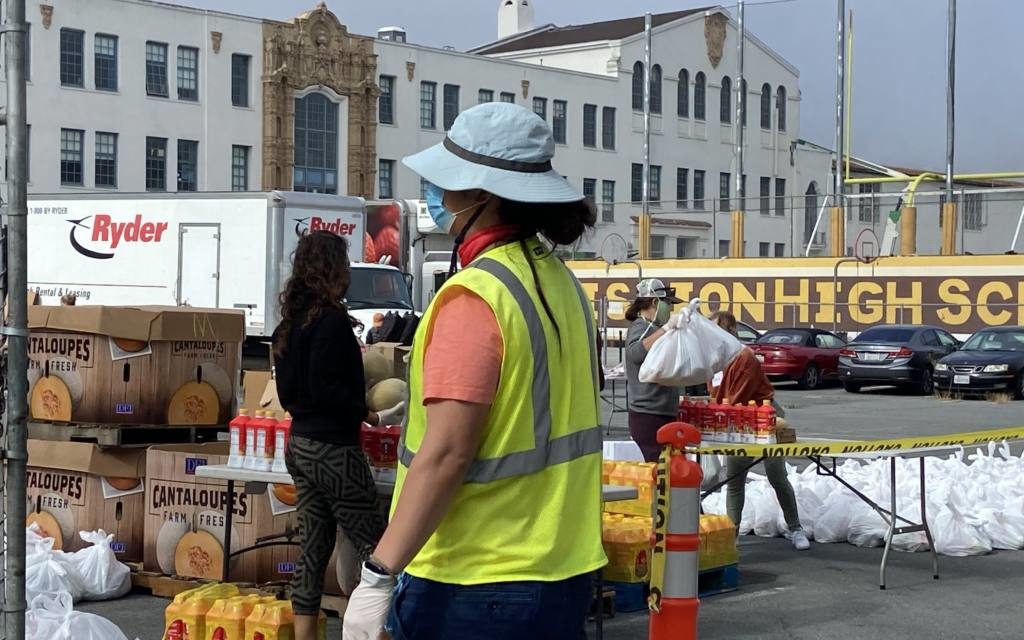 They’ve watched throngs of elderly, immigrant residents line up at 6:30 a.m. for pantries that opened hours later. An hour before closing, some mothers and children were turned away when one pantry ran out of food. Increasingly, volunteers reported sightings of repeat visitors: those who dressed up in different outfits and returned for another bag of food, or who showed up at another location.

“It is a trauma reaction,” said Tina Gonzales, the director of community partnerships at the San Francisco-Marin Food Bank. “There has been a lot of fear about being food-insecure right now.”

To keep their food supplies available for wide and fair distribution, the food bank recently decided to implement a registration system for the temporary pantries it began operating in response to the pandemic.

People must sign up for one pantry site and are given a personal color-coded card with a designated pick-up time that is enforced.

Currently, nearly all of the so-called pop-up pantries in San Francisco are on their way to being registered. The first to do so was Gordon J. Lau Elementary School site in Chinatown back in May, volunteers said.

Dawson Lau, a pantry lead and registrant who works at various pantry locations, said sometimes Gordon J. Lau would have to close an hour early, which prevented some families from collecting the food they needed for that week.

“It’s kind of heartbreaking, actually,” Lau said of the Gordon J. Lau site. “We didn’t have anything left to offer them because there were so many people who come back a second or third time.”

While double-dipping played into the registration decision, pantry closures and repeat visitors were few and far between overall, Gonzales said.

The biggest motivator for registration was a desire to stretch the food bank’s resources and to keep tabs on which communities seemed to need the most help. For example, the Mission High School site doled out approximately 1,200 bags each Tuesday from 9 a.m. to 1 p.m. About 620 people enrolled (and counting) last week, a difference attributed to visitors opting for different pantry locations and the ability to enforce one pantry visit a week.

“We need to know who’s attending and where to set up new pantries,” Gonzales said. “But ultimately, enrolling [repeat visitors] will stop too and just create space for new people.”

This system was borrowed from San Francisco-Marin Food Bank’s permanent pantries, which already register their clients. Pre-pandemic, 25 percent of San Franciscans said they were at risk for hunger due to low income or physical inaccessibility to food, said Shireen McSpadden, executive director of the Department of Disability and Aging Services, at a press conference.

Read vignettes about people lining up for food pantries during the pandemic, here.

At the Mission High School pop-up site, volunteers working on the school’s blacktop parking lot stocked approximately 1,200 bags brimming with fresh vegetables, protein, and an occasional gallon of milk. Just a month ago, the line snaking from around Dolores to as far as Church Street became a familiar sight in the neighborhood on Tuesday mornings when the pantry runs.

Pick-up times are usually strictly enforced, causing problems for those whose schedules don’t align. A computer randomizes a time slot for pick-up, rather than consulting the visitor. This ensures one slot isn’t too crowded, Gonzales said.

Still, as with most adjustments, those who came for food on August 4  were left frustrated and confused.

A little after 9:30 a.m., a man still dressed in pajamas darted to a volunteer at the Mission High site, flailing his card. The white color means noon — but he said he needed to pick it up now because of a scheduling conflict. The volunteer hesitated, and per guidelines, refused.

“Please, I need the food, my family relies on it,” the man said. “Isn’t there someone I could talk to about this?”

Lau was summoned, heard his story, and relented. He told the man this was an exception. The man thanked him, grabbed a food bag and speedily drove off.

A woman waiting in line just shy of 10 a.m. sighed. Her ticket was white, too. She needed to get to work soon, she said. She was here now, so why weren’t they letting people in? Eventually, she grew frustrated and stormed off.

“You’re telling me that this is so bureaucratic, I can’t just pick it up now?” She said. 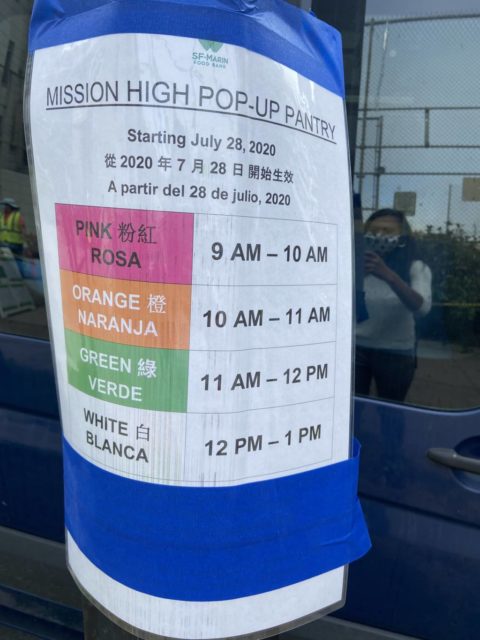 Milton Reyes-Torres, who said it was his first time using a registration card, had the same question. He said he relies on this food and the $500 check given to undocumented residents by the governor, which he already used up.

Reyes-Torres, originally from El Salvador but a San Francisco resident for a decade, said the restaurant he worked at in the Embarcadero closed in March and he’s been unemployed since.

“It’s 9:30 a.m. now, and there’s no line. Why can’t we go in?” Reyes-Torres said in Spanish, though he admitted it was better than waiting in the long line weeks before.

While people can’t pick up food earlier than their allotted time, they can return and collect one after everyone from that slot is done, Lau said. People can hand off their card to a friend, too, who can pick up a bag in their place.

What about those who can’t make a later slot?

“If it’s a consistent thing and we recognize that, we can speak to you and make an exception,” Lau said. 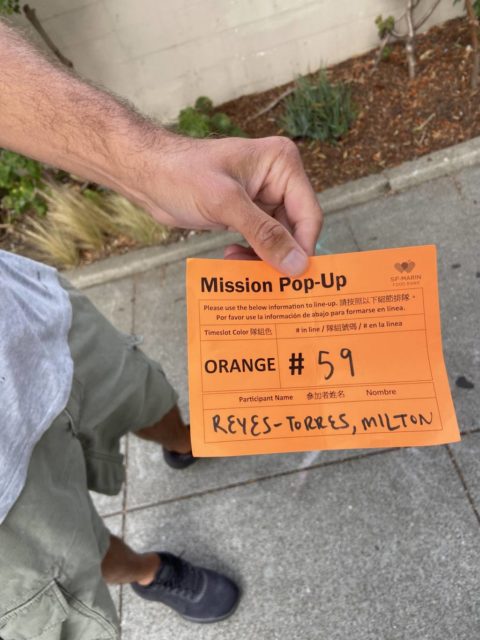 Milton Reyes-Torres has an orange card registered for the Mission High site, meaning he can pick up at 10 a.m. Photo by Annika Hom.

Maritza, 50, said she thinks the card system will be convenient once it picks up steam. However, this week she got mixed up. Her card’s color means she should come at 10 a.m., but she was unsure if she should come early.

She too, is an undocumented resident that has been out of work since March, when her workplace closed down. Unlike Reyes-Torres, though, she accessed no other resources. A friend sometimes brought her food from this pantry, so she decided to sign up for herself.

“It’s really hard,” she said in Spanish. “The truth is, what’s happening now is really bad.”

Though the official registration period for Mission High has ended, Lau said he and his team are still accepting new enrollees. As unemployment benefits dry up, rent moratoriums threaten to end, and the paused city endures, it is likely many new people will be added to the thousands helped each week.

A week after registration at Mission High closed, Lau looked at his numbers. They were up by another 70 in one day. 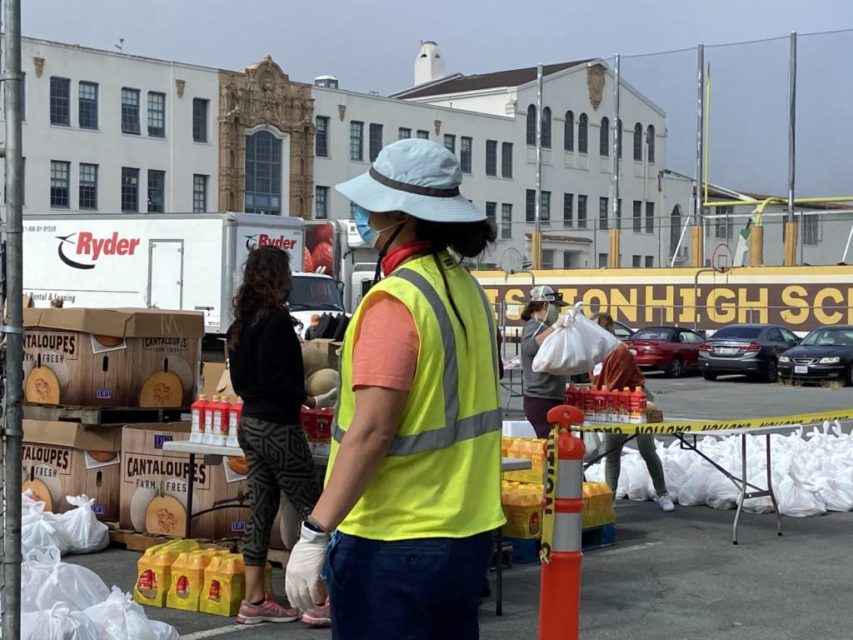