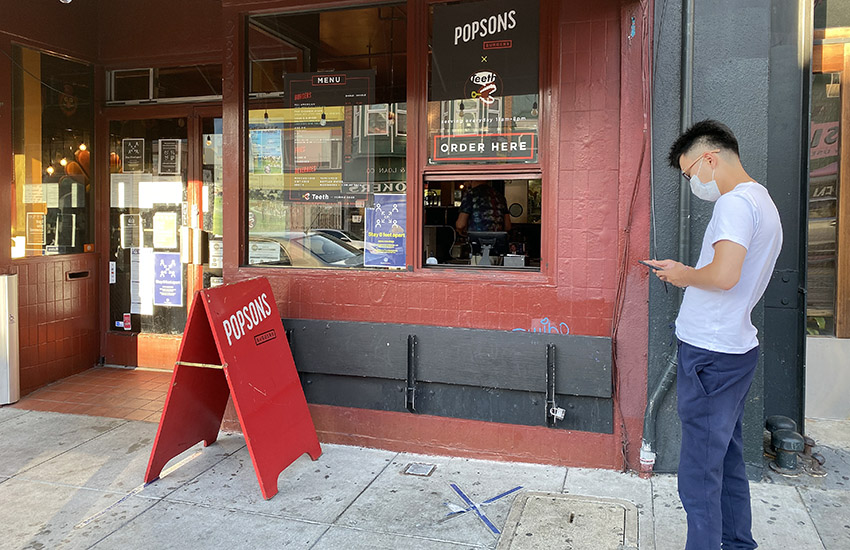 I’ll be honest. It’s difficult for me to write a review about a burger right now — or, for that matter, eat one. Few things represent American “okay-ness” more than a hamburger.

Amid a pandemic and what seems to be the viral replication of police violence in the face of nationwide protests, things are not okay.

Nevertheless, on Tuesday night I ordered from Popsons, a burger joint that recently opened a window at Teeth, the venerable bar at 19th and Mission. Popsons, as it happens, specializes in what I call The Great American Burger. Its most basic item is actually called the “All American.”

Far different from a gourmet, dine-in burger (which is what I believe we — or at least I — had last week at the Pork Store), the American hamburger has been mastered by establishments like In-N-Out, Beep’s, and Super Duper. These kinds of burgers come wrapped in brown wax paper. They’re often times saddled with American cheese. They’re not, by definition, very big.

That is exactly what arrived at my door from Popsons.

The Popsons burger looked amazing. It was a simple cheeseburger (yes, with American cheese), shredded lettuce, pickles, tomato, and onion. It glistened. Like the American dream itself, it promised so much.

That promise turned out to be tawdry, as Popsons seemed to assemble all the elements of the American burger in a pristine conceptual whole far less than the sum of its parts.

When I took the first bite, I came up empty on flavor, tasting only beef and soggy lettuce. I had ordered the beef medium rare, but got a fully-cooked patty and wondered why they even gave me the option. But I kept searching.

My new housemate, E, was suffering from a mad french-fry craving and swooped in on some of the Popsons “seasoned fries” I ordered, which were accompanied by what appeared to be house-made ketchup. The ketchup was good — ”tangy” — she said, but the fries were too seasoned, too salty.

Her conclusion was unsparing: “This did not satisfy my french-fry craving.”

After more of the same emptiness from the burger, it was over. Perhaps a better way to order would be to double up on the patties and maybe pile on some extras — “truffle cheese,” for example, or “clover sprouts” — though now things are starting to get expensive and veering away from the simple delights that Popsons’ entire image rests upon.

All told, the cheeseburger with seasoned fries alone (plus tax, tip, service and delivery fees), cost $16.55. And, really, the whole experience was so predictably — horrifyingly — American.

Hey, Julian. Great to read your tweets Wednesday night —  I had to leave the protest after a few hours, but it was spectacular while there — first time in a while that, at 74, I haven’t felt like one of the younger people in the crowd. Once home, I followed it from your tweets, even though they kept interrupting my favorite British detective series. Seriously, why can’t our cops be like the ones we watch on British TV? I wonder if the SFPD might have more success with their reform program if they recruited from the Royal Academy for the Dramatic Arts.

I imagine they detained you not for any personal or political reasons, but because they felt offended by your burger dogmatism. No doubt the Mission cops closely monitor topics of police interest, so would have read your review of the Pork Store burgers. When you insist that a “burger” can only mean one thing – a beef patty on a white bun – it doesn’t play well with the boys in blue, who, especially these days, must want more choices.

Popsons keeps it more or less basic. Notice I include a “beet and quinoa burger” as “basic.”

I got the All-American. A double All American and seasoned fries. 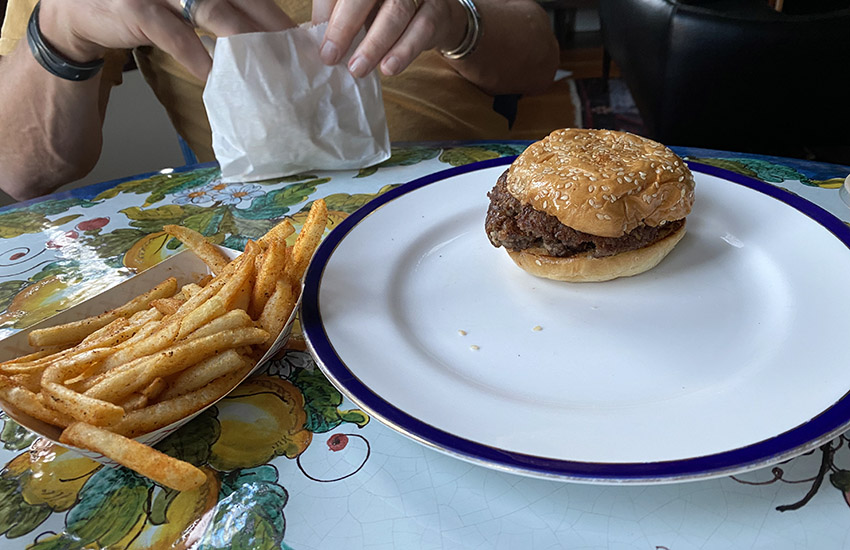 Let’s begin with the meat of the story.

Popsons burgers are made with beef which is “butchered, ground, and pattied in-house daily.” Should that make a difference? Flavor-wise? Ethics-wise?

Like you, I ordered medium rare and got well-done. Really well done, though no doubt beef. More texture than taste. This one must have made the All-America team in 1968.

Though it did not taste like it had been sitting in the freezer for the past 50 years. And that’s a plus.

The flat dry beef cries out for relief, and what Popsons offers is either a tangy ketchup (called “BBQ sauce”) or a thousand island dressing (called “Secret Sauce”). I am happy to report that both considerably revived the burger, and went well with the sesame bun from Petits Pains.

The secret sauce has some spice. It also has little green things swimming around, which I interpret to be herbs.

I agree with E on the fries. Unlike last week’s poorly salted fries at The Pork Store, these fries were too salty. I’m not sure, but it might be MSG instead of salt. They held up well. Didn’t sag or become bored like fries often do if they’re not immediately consumed. But, like their All-American friend, they tasted much better drowning in Secret Sauce.

I think you should sit down with Chief Bill Scott and the Bureau of Transparency and Accountability and explain that in the future you will pursue burgers with an open mind and you welcome their suggestions. Make them feel like they don’t have to be waving their batons around to participate in the Great Burger Wars.

Next week we get serious: Big Mouth.

For others in this series go here.