The Great Burger War goes to The Pork Store 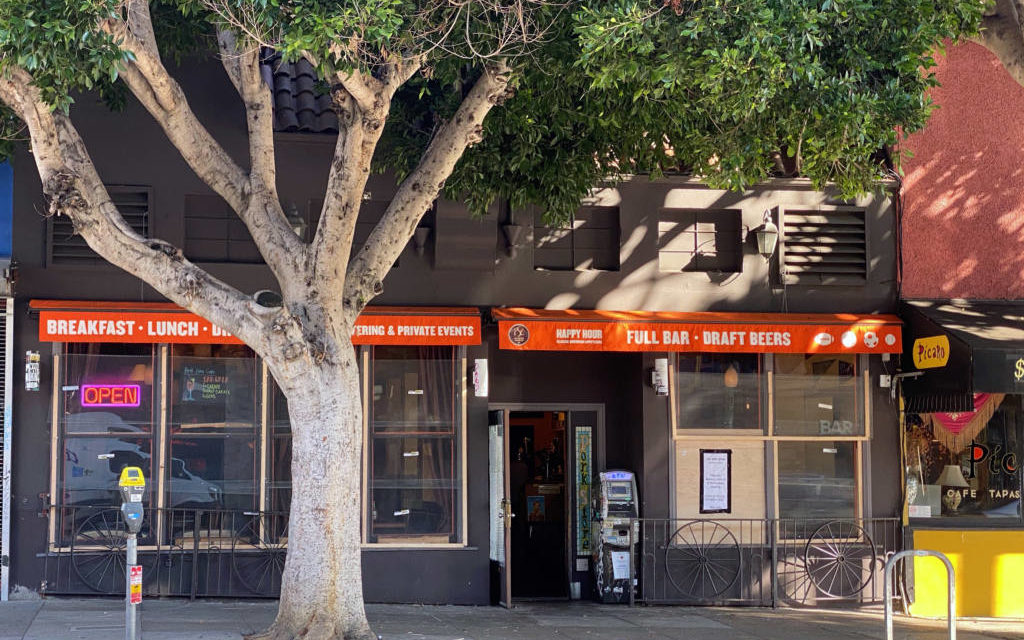 The Pork Store and Picaro are both open for takeout. Photo by Lydia Chávez

Here’s a question for you, Julian: What is a burger?

Before getting that discussion, let me assure our readers, if we have any, that it is not our intention to drive local eating establishments out of business during a time of physical, economic and mental dislocation. The virus, and the response from various levels of government, needs no help in that regard from the underpaid, unappreciated, but nonetheless essential, workers on the Mission Local Burger Desk. We tell the truth, and let the chips fall where they may.

So, back to my original question: What is a burger?

We didn’t define the characteristics and parameters of a “burger” when we began, arrogantly assuming there was a single, universal, meaning to the term.

I had my first encounter with this inconvenient untruth at a place you would not expect post-modernism: The Pork Store Cafe.

When it comes to ancient SF institutions, the Pork Store ranks among them, beginning on Haight Street in 1916. It’s come up, gone under, and risen again, opening up a branch on 16th Street in 2003, and billing itself as  a “distinguished breakfast institution.”

Okay, I never went there for breakfast, and never paid much attention to the menu. I went for the games on a big screen and the outstanding bathroom graffiti.

To find a burger, you have to scroll down through endless listings of eggs, bacon, pancakes, salads and even sandwiches. I should have immediately read the bottom-feeding placement of  “burgers” as a sign.

Among the “burgers” listed were an ahi tuna burger, a chipotle and avo burger, a cali burger, a Cali garden burger and a Cali boca vegan burger.

No plain burger was listed. There were two cheeseburgers, though: Porky’s cheese burger and cheese burger. For simplicity’s sake, I picked the latter.

After you choose, the menu takes you to a pop-up for sides, cheese, and a category called “make it.” That category allows you to indicate your choice of boca vegan, garden or turkey.

I assumed beef was the default, so ignored that category, but the site would not allow me to order. I had no choice but to choose.

I was about to give up and get a bowl of ramen from Ushio when I noticed “BBQ pulled pork burger.”

Isn’t that an oxymoron?

Pulled pork is shredded. Even a “distinguished breakfast institution” would not call a sandwich a burger and put it in the burgers category if it wasn’t a burger.

I assumed they must grind their pulled pork and make it a patty.

I was wrong. It’s a pulled pork sandwich on a burger bun.

The pork was extraordinary: light, flavorful and tender as if it had been roasting on the spit for hours, or days.

The BBQ sauce, not-too-sweet and not-too-spicy, did not drown out the meat, but complimented it.

The bun was toasted but unremarkable.

The fries, unfortunately, were so-so. They had some depth, but no heft. No grease, but flabby anyway, and not enough salt. It seemed the attention paid to the pulled pork was not paid to the potatoes.

I liked the dill pickle on the side. Very dill. Very crunchy.

I am anxious to hear your experience.

My feeling is that, like the Pentagon, we need to set some minimum metrics, or at least agree on a working definition of “burger” before setting out again on the Great Burger War. Where do we go next? —MR

Mark, Mark, Mark — just admit it: You don’t know how to order a hamburger and you ordered a pulled pork sandwich instead. That’s okay! But don’t try to write your way around it by waxing pseudophilosophic about defining what a “burger is.” Do you like Bill Clinton? You two certainly have something in common.

Everyone knows what a burger is, Mark. And you do, too: Two buns and a beef patty. God save our souls if the patty is anything but beef for the purposes of this series. Otherwise, I’m out.

But I’m happy to inform you that I did order a burger — a real burger. And it was a really good fuckin’ burger.

The real question we should be asking in these trying times is: How well do these burgers travel? I ordered mine off the Pork Store website and picked it up. It’s about a 0.7-mile, nine-minute walk from Mission Local headquarters. I estimate my burger (and curly fries) were waiting for about 15 minutes for consumption.

But the burger, my friend, was almost everything you want out of a burger. The first bite was 10/10 — an initial swirl of beef, cheese, bacon, and mayo. “surprimo,” I wrote in my notebook for some reason. The second attack brought even more fun: As I lifted the burger, little bits of bacon were dangling off strings of melted cheese — like Christmas ornaments. “Burger Christmas,” I scribbled in my notebook.

By this time, the bottom of the bun was about a quarter of the way soaked in grease, but these Panorama buns held up fine. Of note: The burger came with grilled onions and raw red onions, and that became overbearing after a while. All and all, though, the burger traveled well. A little extra time for the ingredients to mingle may have made it even better. “Damn,” I summed up in my notebook in a state of utter satisfaction.

But wait, what about the beef? Unfortunately, this is the only category in which I docked points. The patty, while substantial, was a little dry. As the American poet A.D. Posey once said: “The best stories are like the best burgers: big, juicy, and messy.” This burger patty was missing the “juicy.”

It’s sad you weren’t able to make such an assessment. So let’s try another quote from the venerable Steve Buscemi: “Just because people want to eat the burger doesn’t mean they want to meet the cow.”

This time around, Mark, it seems you didn’t want either. —JM