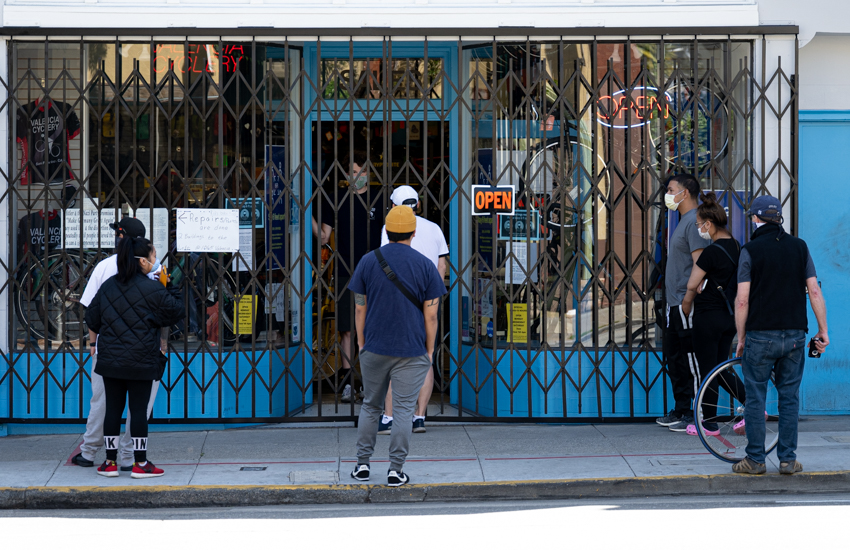 Update, June 26, 4:04 p.m.: “We’re taking a pause here,” Colfax said at the start of this afternoon’s press conference on the mayor’s decision earlier today to halt the re-opening process. “We’re not reversing.”

He noted that further study of how COVID-19 data develops in the coming days will determine how long reopening will be delayed.

“That curve is not flat right now. In fact, that curve is getting more and more vertical,” he said, speaking about the increase in COVID-positive individuals.

On June 14, 2.7 individuals per 100,0000 people were testing positive.  As of yesterday, the rate was 5.1, which put that indicator from low level alert to Level 3 Moderate Alert (orange). It is at that level that “the City will consider pausing or dialing back reopening” per the Key Health Indicators website.

If this trend continues, the city could enter “the red zone” for COVID cases, Colfax said.

He described orange and red zones as “the most concerning,” and said that “especially when we’re red, it means that we need to really take a hard look and consider pausing or even reversing.”

The Department of Public Health doesn’t yet know why cases are increasing and Colfax said he suspects it is “probably a combination of factors.”

As of Thursday night, 45 people diagnosed with COVID were hospitalized in city hospitals, and 27 of those were in intensive care units. These numbers included transfers from San Quentin State Prison and Imperial County. This is a sign that San Francisco hospitals’ capacities are in good shape, Colfax said. However, he noted that the department will be monitoring for a surge of increased hospitalizations as they consider reopening. Several Bay Area counties are currently experiencing an alarming surge in cases that may force them to close certain businesses once more.

Regarding contact tracing, the city is still not hitting its target of 90 percent of COVID-19-positive individuals and 90 percent of their contacts reached.

However, there are nearly 300 more trained individuals ready to do this work if need be, and Colfax noted that the city’s contact-tracing power has greatly improved since the pandemic started, when the city had only  only 12 contact tracers.

Colfax also noted that 50 percent of the cases they have reached through contact tracing have been monolingual Spanish-speakers, highlighting the disproportionate impact of COVID-19 on the Latinx community. He also mentioned the higher risk that essential workers face and noted that efforts to stop the spread of COVID-19 are “more than just about testing, that this is about providing the wraparound services to people.”

More time and data are needed before the Public Health Department identifies the demographics of the increasing number of people testing positive for the coronavirus in recent days, or if the increase is linked to any particular events or facilities.

New data expected over the coming days will also guide the department in its decision to resume reopening.

After announcing on June 22 that San Francisco was poised to enter a new phase of reopening this Monday, Mayor London Breed tweeted this afternoon that the city is “temporarily delaying” its plans. It is unclear what date the reopening has been pushed back  to.

The Department of Public Health today confirmed that this delay was initiated at its request.

The next phase would have allowed certain businesses originally slated to reopen mid-July, including hair salons and barbershops, zoos, museums, tattoo parlors and outdoor bars, to open instead in late June.

Breed cited the rise in cases in San Francisco and California as the reason for delaying the re-openings, tweeting, “Our reopening process is guided by data and science. COVID-19 cases are rising throughout CA. We’re now seeing a rise in cases in SF too. Our numbers are still low but rising rapidly.”

“At our current rate, the number could double rapidly. If that continues & we don’t intervene, we’ll be at such a high number that our only option would be to shut down,” Breed tweeted.

Although the total patient count has edged up in the last week to 45, it is still well below the May peak of 90 patients.

San Francisco Health Officer Dr. Tomás Aragón and the Department of Public Health received the Board of Supervisors’ approval to submit an application for variance to the state government on June 16. San Francisco is just one of four counties statewide which has not moved forward in the reopening process, as stated on California’s county variance website. It is unclear at this time where the application is in the approval process; without approval, San Francisco will not be able to speed up the timeline on reopening and will instead be required to abide by the state’s Roadmap to Resilience reopening dates.

Breed followed her announcement with a plea to continue with protective health measures such as using facial coverings and social distancing.

Dr. Grant Colfax will be holding a press conference at 2:30 today to explain the rationale behind the delay.

We will continue to update this story as more information becomes available.