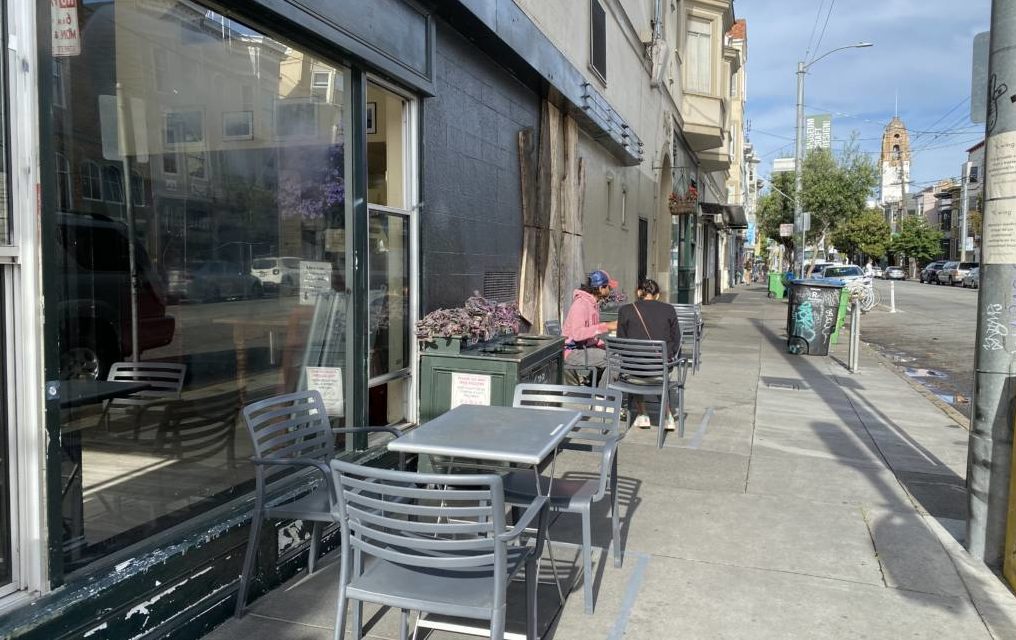 Results of board vote are in — see end of story

At a moment when everybody could use a drink or two, many newly reopened San Francisco restaurants found themselves unable to legally serve alcohol after they discovered San Francisco has yet to file the necessary paperwork with the state of California.

Mayor London Breed last Tuesday tweeted that restaurants would be permitted to re-open for outdoor dining June 12. This was a pleasant surprise for many restaurateurs, who’d long been anticipating a June 15 reopening. But a goodly number of eateries began serving on Friday, seating patrons at sidewalk tables or in patio seating.

For restaurants already permitted to serve customers in such settings prior to the pandemic, everything ostensibly proceeded smoothly. But other restaurants found themselves in need of a “temporary catering authorization” from the state department of Alcoholic Beverage Control.

For San Francisco businesses accustomed to a bureaucratic song and dance, this shouldn’t have been too difficult. Just a $100 check and a trip to the ABC’s regional office (no credit cards and nothing remote, several restaurateurs attested to Mission Local).

But it turned out to not only be difficult, but impossible.

Because the county of San Francisco hasn’t yet filed a local variance for permission to move into the next COVID-19 phase earlier than the statewide Resilience Roadmap, these alcohol permits cannot be granted. San Francisco Health Officer Tomás Aragón will today speak with the San Francisco Board of Supervisors about making this application.

Of the state’s 58 counties, 52 have already made this move.

In the meantime, many cash-starved San Francisco eateries, then, cannot legally provide customers with alcohol — which is one of the most efficient ways for restaurants to make money, especially when operating with reduced capacity.

Lauri Thomas, the executive director of the Golden Gate Restaurant Association, adds, “it’s not clear that everyone understood the nuance.” For a restaurant to risk losing its liquor license by flouting the law is no small deal, she says.

Breed said on KCBS that enforcement would not be heavy-handed; “Don’t stress so much over a permit … we’re not going to come around with a pen and pad giving you citations.” That sounds reasonable — but the ABC is a state agency, not a city one.

And, confoundingly, the San Francisco Police Department Notice on “shared spaces” appears to differ from the city’s June 11 health order on outdoor dining — and holds outdoor diners and drinkers to a higher standard.

The Health Order from Dr. Aragón requires the establishments serving alcohol to also “provide” food — what he calls “bona fide meals.” In this scenario, an individual could patronize such an establishment and choose to order only a beer or glass of wine, not food.

The police department, however, puts the onus on the individual, not the establishment, and seems to disallow a beer/wine-only order. “Restaurants and bars must have a permit to serve outside, bona fide meals must be served (and no alcohol without such meals),” reads the Department Notice.

A Board of Supervisors’ letter of approval must accompany the variance application sent to the state by Dr. Aragón. This is scheduled for a vote at today’s meeting — but it struck several supervisors we spoke with as odd that they are being asked to approve the move without seeing the application beforehand.

The application requires counties to demonstrate that they have met specific criteria relating to the number of COVID-19 cases, capacity of hospitals, availability of personal protective equipment, as well as contact tracing and testing capabilities. It also asks counties to provide details on how they plan to move through Stage 2, including which industries will be reopened, when, and how these plans differ from the state’s timeline.

Aragón is scheduled to address the supervisors this afternoon. Moving the variance application forward would require up votes from eight supervisors.

This matter is scheduled as Item No. 28 at today’s Board meeting. This story will be updated with the results of that discussion and scheduled vote.

Update, 8:26 p.m.: After a seemingly endless litany of firefighters, publicans, restaurateurs and — especially — tattooists and tattoo enthusiasts called into the Board of Supervisors public comment to urge passage of “Item 28 and Dr. Aragón” (this phrasing was repeated, verbatim) the Board at last took up the matter shortly before 7 p.m.

“We’ll be joined by Dr. Tomás Aragón, obviously the most important guy with tattoo businesses,” said Board President Norman Yee with a laugh. “I’ll have to re-read it: I thought the legislation was about him!”

After the requisite preambles and PowerPoints, Supervisor Aaron Peskin posed Aragón a basic question. “Do you support this variance?”

The supes’ discussion with Aragón did, at times, focus on the specifics of what a variance would allow (without one, of great interest, to many callers, you can’t open a tattoo parlor — no way, no how). But frustration mounted over what the doctor could not answer.

Supervisor Hillary Ronen queried whether a potential increase in COVID cases coming with the re-opening of the economy would possibly result in the residents of Shelter-In-Place hotel rooms being removed in favor of new, sick residents.

While the doctor could answer with certainty that the city was within the parameters for rooms laid down by the state, he could not speak to this. He could only hope to participate in formulating a “mutually agreeable” solution.

“Is there no one from the mayor’s office who can answer these questions?” asked Ronen with clear frustration. “I want to vote on this today, but I don’t want 60-year-olds evicted onto the streets.”

The possibility of a week’s delay on this vote was brought up, but the supes were loath to subject the city’s struggling businesses to another week of economic despair (and, notably, an ongoing Kafkaesque disconnect between overlapping local and state bureaucracies).

A representative of the mayor’s office later confirmed there would be no displacements of Shelter-in-Place room occupants.

“I continue to be incredibly disappointed in the leadership of the mayor’s office and Dr. Aragón to support our most vulnerable residents who are dying on the streets in far greater numbers than last year. … I hope you go back home and think about that when there are people with very serious health conditions dying on the streets tonight,” said Ronen. “But it is also important to help the businesses that are also dying. So I will be supporting this variance today.”

Tattoo this on your bicep: Item No. 28 passed unanimously.

If you want to keep us employed — and have not already done so — please support us now.