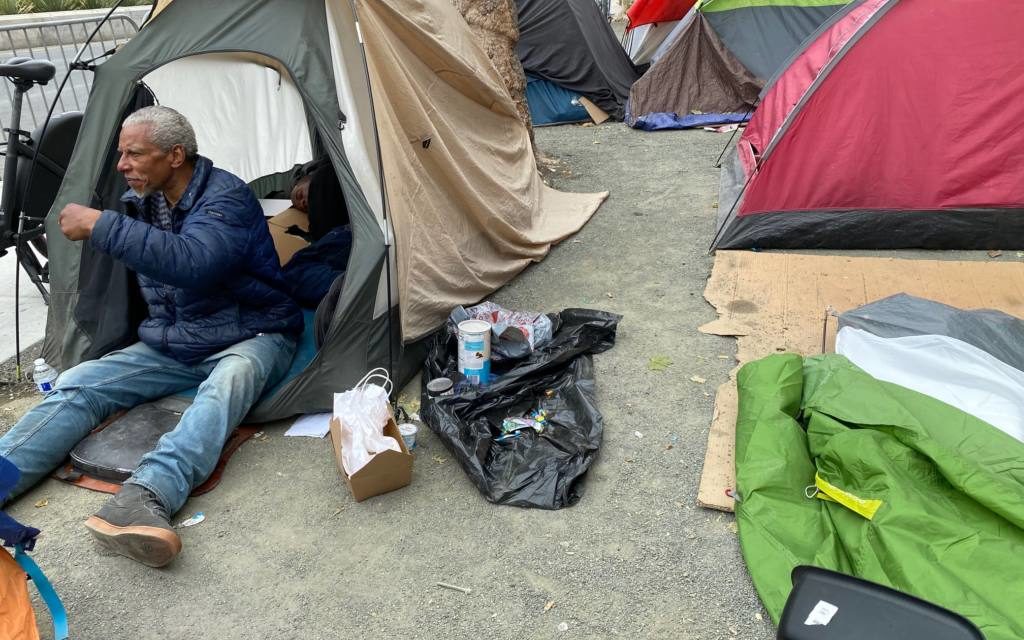 James says police insisted he stay within his tent near the Asian Art Museum after 10 p.m. due to a ‘curfew.’ Photo by Lydia Chavez

San Francisco Health Officer Dr. Tomas Aragón was hard-pressed for answers Tuesday evening as members of the Board of Supervisors grilled him about the Department of Public Health’s perceived lack of coronavirus strategy to address the city’s 8,000 homeless individuals.

“I’ve, frankly, been shocked that there has not been one health order issued yet directly related to this population …” said Supervisor Hillary Ronen, asking Aragón why he has not yet issued a binding order to commandeer hotel rooms to allow the homeless to safely shelter in place.

Aragón said the city needed to exhaust all its resources to obtain hotel rooms before taking the dramatic step of commandeering them, per advice from the City Attorney. “So it didn’t seem to me to make sense to do an order if the city has the capacity to negotiate and get hotel rooms,” he said, “as the Board of Supervisors has also passed an ordinance to require that, as well.”

Ronen rejected his answer. A City Attorney memo, she argued, opines that both Aragón and Mayor London Breed have the legal right to commandeer the rooms no matter what.

“You just shut down the entire economy of San Francisco … and I stood by you, and I stand by you in that decision,” she said. “You have not been willing to do that for the homeless population.”

“I’ve explained the best way I could,” Aragón said. “That’s all I’m prepared to say at the moment.”

Many of the supervisors echoed each other during the two-hour briefing at the tail end of the virtual Board of Supervisors meeting. They accused Aragón and the city’s Health Department of leaving the city’s homeless individuals to languish on the streets with little guidance and few resources for weathering the pandemic. As the criticism grew more intense, so too did Aragón’s attempts to leave the meeting (“I am really going to have to run because my wife is going to be very upset with me.”)

Everyone was upset with him.

The meeting did, indeed, go longer than originally planned (there was really that much frustration and anger), and Aragón’s colleague, Dr. Grant Colfax, the Health Department director, cut out just before the melee on homelessness began.

But before Colfax left his colleague alone with the angry supervisors, he insisted that, from the beginning, the homeless population has been a “key priority” for his department. The Department of Public Health, he said, has been successful in placing hundreds of homeless people in hotel rooms, particularly individuals with chronic conditions and individuals over 60. “Really, doing that has saved many lives,” he said, noting that the city has a capacity of 500 hotel rooms for the population with only 200 occupied.

The debate over whether to move San Francisco’s homeless population en masse into hotel rooms has become an ongoing political battle between the supervisors and Mayor Breed’s administration.

Since the crisis arrived in mid-March, the board has pushed to give rooms to every homeless person, while Colfax and Breed have insisted on only providing rooms to the most vulnerable and those who have been exposed to the virus. The mayor has stated she intends to obtain 7,000 hotel rooms — but without a firm timeframe. The board last month passed an ordinance requiring the city to obtain 8,000 hotel rooms by the end of April — but the mayor chose not to carry out the law, which is within her purview.

As of Monday, 156 homeless individuals have tested positive for COVID-19. Of those, one has died and 22 “had a recent hospitalization,” said Jenna Lane, a Health Department spokeswoman, noting that “COVID may or may not be the cause of these hospitalizations; it could be discovered while a patient is being treated for another condition.”

Since April 24, there has been a 16 percent increase in cases, she said.

But a lack of confirmed cases is also an indicator of a lack of testing. And so far, the city has made free, accessible testing available for frontline health care workers, first responders, essential workers, and San Franciscans showing symptoms.

The homeless and residents living in SROs, however, do not have easy access to testing. And the supes asked Aragón the reason — especially as the city now has a testing capacity of 5,800 per day.

Aragón said that it has taken a while to achieve that capacity, and that the city is working toward “universal testing.”

He did mention that the Health Department will soon test 800 residents and 1,500 staff at Laguna Honda, a large care facility, and will be moving to other congregate living facilities in time.

But testing alone is half the battle, Aragón said, “because when you test, you’re going to find staff and residents in long term care facilities, some of whom are positive — and then you have to figure out what to do with them.”

That kicks off a process of “infection control,” he said. And then the Health Department needs to retrain staff on how not to get infected again, and staff members have to leave and perhaps isolate.

“So there’s all this work that has to be done to make sure that they mitigate what’s happening in their site,” he said, and “also figure out a path forward.”