Lazy Bear is Awake from Hibernation! 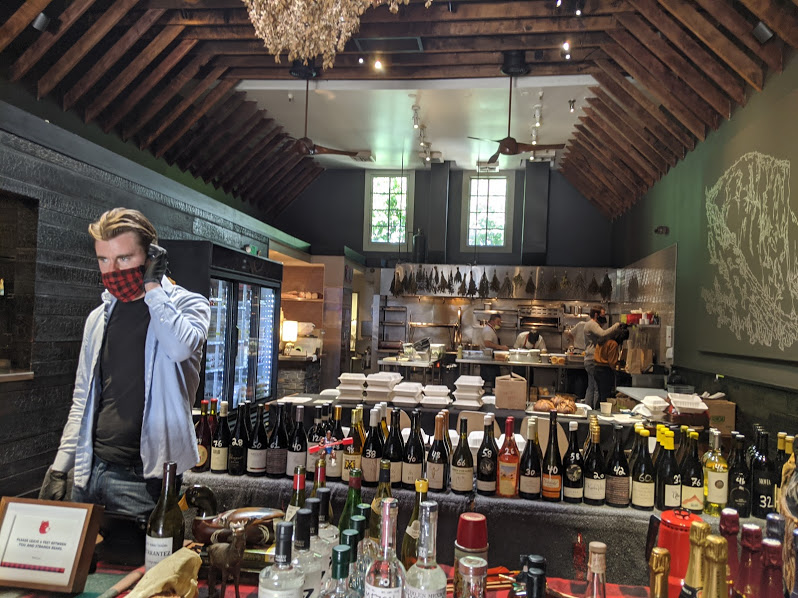 I’m not sure how long Lazy Bear was closed after the lockdown (full disclosure: we’d never been before), but I recently discovered that it’s doing takeout which, for a place like this – high end, reservations made by purchasing tickets, two seatings a night, a hefty per-person tab, etc. – is quite a pivot.  But it’s been offering breakfast and lunch, the latter consisting of sandwiches, soups, salads, and dessert, along with items from their commissary.

To be sure, Lazy Bear is still a bit of a splurge (be aware that a 20 percent gratuity is automatically added to your total), but not impossibly pricey.  The only catch for me is it doesn’t take phone or online orders. You stand in line to order your food and wait outside until it is ready. During its busiest times – 10 to 11 a.m. and noon to 1 p.m. – there is a wait.  On Sunday, I waited (people spaced six feet apart) at noon for 40 minutes. After ordering inside (safely), the food took maybe 15 minutes more. I did ask the fellow who took my order if the restaurant was considering switching to online ordering, and he allowed that it had been discussed.

I had the duck banh mi with paté, and the BF got the meatball sandwich with provolone and pickled peppers. My banh mi was tasty enough, though rather small for a typical banh mi (and for the price). The meatball sandwich had a good texture, but tasted mostly of red pepper. The BF was not impressed. I also got a cocktail, the Moo-hattan — supposedly made with beef tallow (!), which I couldn’t discern. It was a good, boozy cocktail, but tiny, and cost as much as the sandwiches. My favorite thing, however, was the dessert, something we rarely order. Described as a banana split pudding, with “everything but the ice cream,” it also had some type of cake at the bottom. Peanuts gave it salt and crunch, and it was delicious. 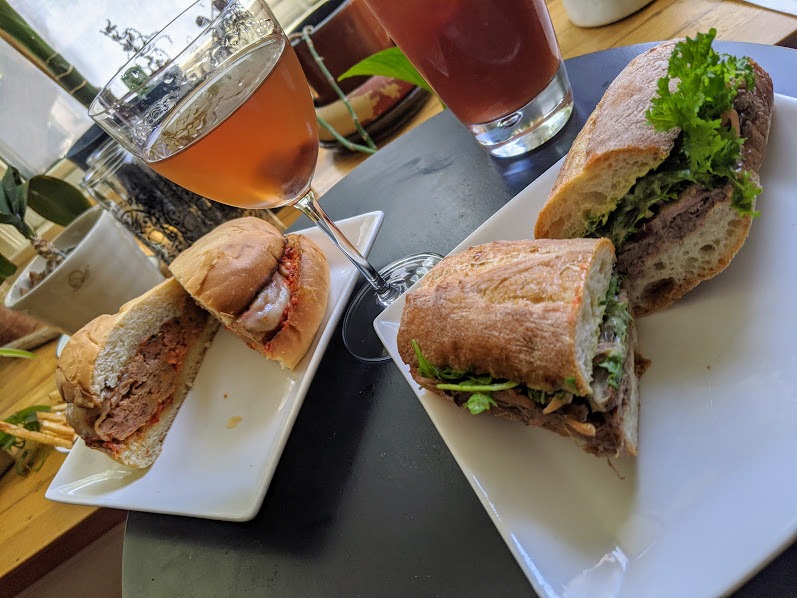 Overall, we found the food probably not worth that long of a wait. Perhaps during less busy times, I’d try something else off the menu. Lazy Bear posts menus daily (it is closed Mondays and Tuesdays to restock), and is selling items from its kitchen fridges and pantry, such as hot sauce, rendered fats, pickles, butter, and take-and-bake cinnamon rolls. There are other baked items as well, and breakfasts include items like grits, granola, biscuits and gravy, and an egg burrito.

For dinner, Lazy Bear is serving dinner kits with fixings that serve at least two people. And booze! It’s selling cocktails, full bottles of spirits, and wine.  It’s pretty much a full service take-out option.  And for those who have missed their Bear, it’s a comfort to see it still open.