A supervisor, a guest, and a nurse walk into a COVID-19 hotel … 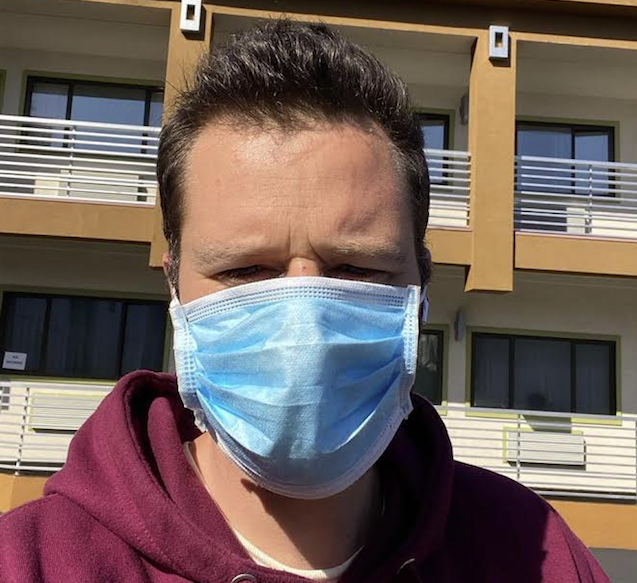 Disaster service worker Matt Haney reports for a 3 p.m. to 11 p.m. shift at a SoMa hotel.

The state of the city’s COVID-19 hotels depends upon who you ask. And when.

Michael Fitzwater is laughing, but it ain’t funny.

He was struck by a car while riding on his motorcycle through the city. His leg broke badly enough the bone protruded through his skin. That hurt. Nearly two months later, it still does.

“They wanted to amputate!” he says. “I refused to let them do so.”

Instead of losing an appendage, Fitzwater gained a room. Unable to properly shelter-in-place or care for himself while recovering during the COVID-19 pandemic, he was placed into a unit in a San Francisco motel in early April. He’s still there.

The debate over who and how many people to place in such hotels — and how quickly — has devolved into a political brawl in San Francisco.

The Board of Supervisors unanimously passed emergency legislation mandating the city obtain some 8,250 hotel rooms and proactively put homeless people into 7,000 of them. Mayor London Breed said she would blow it off and was true to her word — and, wouldn’t you know it, legally, she’s entitled to blow it off.

As of mid-week, around 1,000 homeless people have been moved to hotel rooms — and fewer than half of the 3,178 rooms the city has acquired are presently being used. Meanwhile, among the unhoused, the mortality rate has doubled since this time last year. 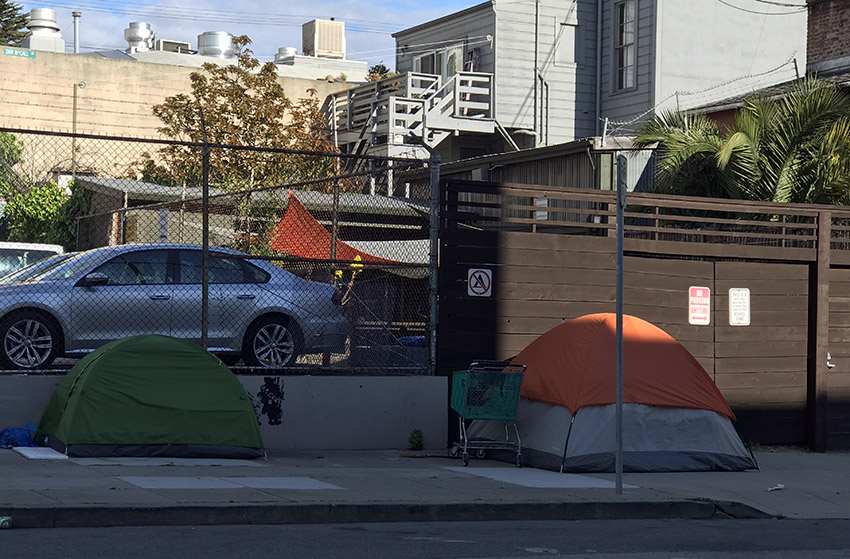 Tents on Florida Street in the Mission. Photo by Sam Lew.

The vast majority of the homeless San Franciscans placed in hotels were not plucked from the street but transferred from the shelter system or other congregate facilities of the sort you wouldn’t want to be in during plague times. There are also a handful of residents, like Fitzwater, who left the hospital with nowhere suitable to wait out a pandemic and scored one of the rooms.

Regardless of the mayor’s concerns and the political brawling, there is an effort underway that could aid a great many suffering people and offer numerous lessons on what a city can do in a pinch to aid its worst-off. There’s much to learn here.

Or, of course, the effort could implode and we could learn nothing. Some days, it feels that we’re on that path. Most days.

The workers operating these hotels weeks ago demanded the residents be universally tested and that their staffing numbers be increased. But the residents of the shelter-in-place hotels have not yet been systematically tested.  Moreover, your humble narrator is told, key staffing positions at hotels are slated to be cut moving forward, not augmented as the on-site staff have pleaded for.

Hotel workers tell me that keeping trained, experienced staff at its present levels (or lower) would all but ensure more incidents of the sort bandied about by city officials who never seemed all that sold on the costly proposition of housing vulnerable people in hotels in the first place.

Back before all of this, Michael Fitzwater managed a Big-O Tires in Marin. That seems a million miles away — as does the acrimonious debate over hotels like the one he’s recuperating in.

The days here blend into each other. Asked if he had any complaints, Fitzwater waited a moment and replied: He wishes all the smokers wouldn’t be mandated to gather in the same place, at the same time, to puff their cigarettes — thereby shattering the entire purpose of sheltering-in-place during a pandemic.

But, other than that, things have been “pretty chill.”

“This has been pretty organized. This is not the worst of places,” Fitzwater says thoughtfully. “This is not bad!” 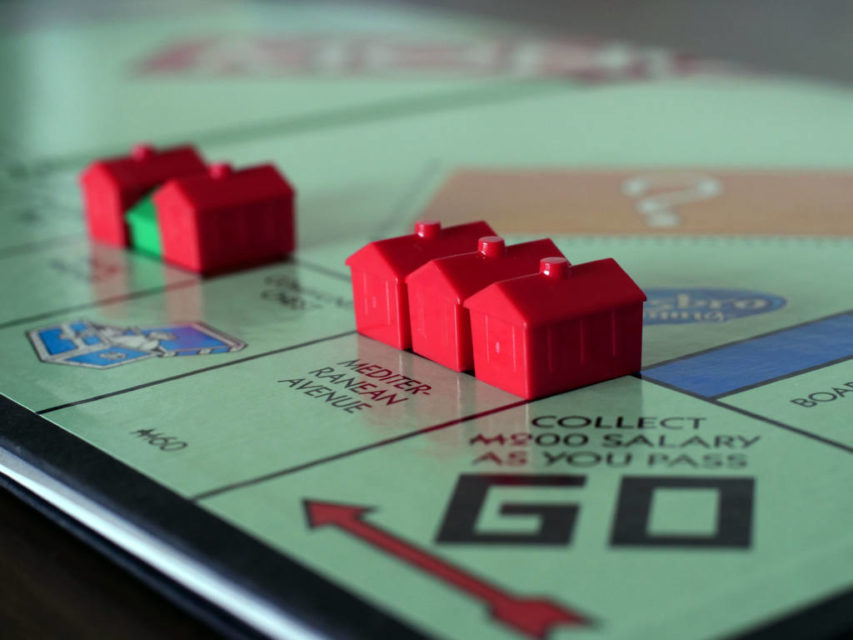 Matt Haney is laughing, but it ain’t funny.

With the litany of neighborhood events that usually fill a politician’s evening itinerary a thing of the past, the District 6 supervisor found a new way to spend his afternoons and evenings — the 3 to 11 p.m. Wednesday to Sunday shift at a SoMa shelter-in-place hotel, where he served a two-week hitch as a disaster service worker.

Far from being a den of out-of-towners who flocked to San Francisco to benefit from our misbegotten largesse, Haney describes the majority of the residents of the hotel as aging African American men who had been living on the streets of San Francisco — a goodly number of them city natives.

Far from folks streaming in and out of the hotel willy-nilly, entries and exits were tightly monitored.

And, far from a bacchanal of overt boozing and drug-use, everything was, in Haney’s own recollection, discreet — and even kinda boring. Nothing wrong with that.

“But nobody is safer by having these people outside. Can you imagine coming in here and looking around and saying, ‘you know, it’d be better if everyone was on the streets’?”

“It was an incredible thing to see regular people — tax collectors, airport workers, PUC engineers — helping people in this time of crisis and anxiety,” said Haney. The elected official doesn’t believe he was sent to some manner of Potemkin hotel. He doesn’t, in fact, even know how many of the folks he handed meals to knew that the tall guy in the mask was an elected official — likely their elected official.

“We should be proud.”

Jennifer Esteen is laughing, but it ain’t funny.

She’s a psychiatric nurse and an organizer with the SEIU 1021. She forwards my way a compilation of complaints from workers within these hotels.

It is a bullet-pointed list that runs to nine pages.

There are also residents sexually propositioning staff or ambushing them when workers enter rooms to deliver food or engage in wellness checks. Esteen says that, in one hotel, a registered sex offender was placed in close proximity to families with children.

The restrooms for staff at these hotels, Esteen continues, were initially only slated to be cleaned once a week. And they came with bar soap — which, yes, “is hella unsanitary.”

But this could work. This could be made to work. 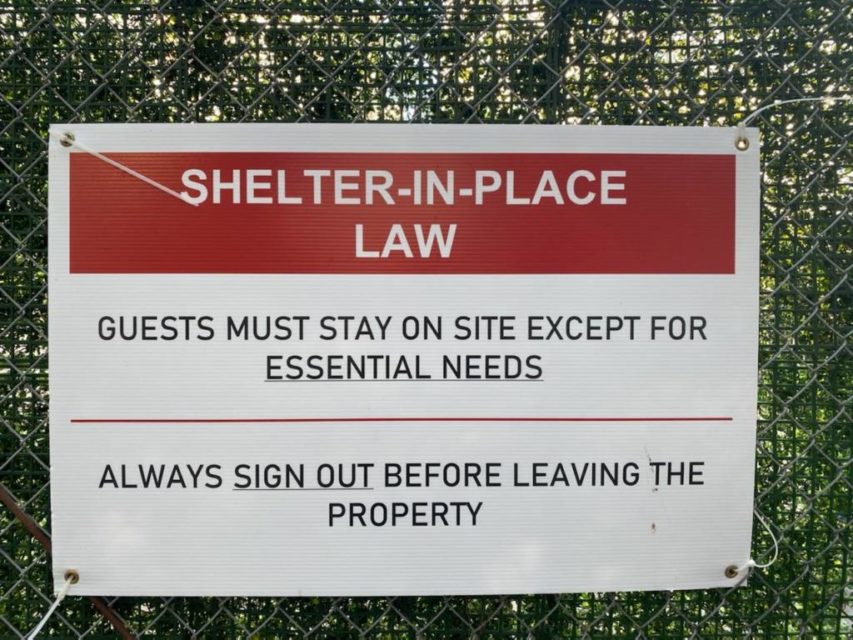 A supervisor, a guest and a nurse walk into a hotel …

It sounds like a joke. But, again, it ain’t funny.

There is a Rashomon quality when talking about the city’s COVID-19 hotels. Nobody doubts Haney saw what he saw (or didn’t see what he didn’t see) during two weeks of eight-hour shifts in a hotel full of men and women brought in directly from the street.

And nobody doubts Fitzwater’s (by and large) non-complaints or the workers’ aggregated complaints, either. It’s all true, depending on who you ask, and when.

Regarding the workers’ grievances, the consortium of unions representing staff at the COVID hotels weeks ago asked that the ratio of counselors ministering to residents be bumped up from one counselor overseeing every 30 rooms to two.

And yet, at a Tuesday meeting with San Francisco officials, OPEIU Local 29 representative Jane Bosio says she was told the city will move forward with a ratio of one counselor for every 50 hotel rooms.

Bosio, whose union represents nonprofit workers in homeless shelters, sums up her reaction as: “Am I really hearing this shit?”

So it would seem. Hiring staffers cost money, and that’s something the city now finds itself lacking. Bosio, herself a longtime former shelter worker, says she feels like she’s stuck in a bind. On the one hand, she feels the Board of Supervisors’ drive to rapidly put the homeless into hotel rooms, while well-meaning, is not feasible. On the other hand, she feels the mayor and her city brass are hamstrung by “trepidations about the hotel project” — and are pushing forward with staffing levels that all but ensure more incidents of the sort used to justify those trepidations.

This echoes what front-line workers, even veteran City Hall denizens, have been telling us for weeks: They feel caught in a crossfire between the mayor and the board.

On the one hand, they tell me, the board’s goals are “utterly unattainable.” But they also feel burned by rationales offered from the mayor that are “not moderate, but conservative.”

Breed has intimated that addicts won’t stay in hotel rooms (with the evident inference being why bother with this?) and stated, without revealing any real evidence or data, that the city’s efforts to aid the homeless during a pandemic have resulted in a cavalcade of vagabonds making their way to San Francisco to sup from our tables.

When the mayor recites hoary anecdotes about San Francisco being besieged by vagrants or broadly belittles her own city’s ability to minister to the homeless — as she also did, incidentally, when campaigning against Prop. C of 2018 — it either plays into deeply conservative tropes or reveals elements of a conservative worldview. Or both.

And that’s fine. People are entitled to think what they think and Breed has now won two mayoral elections (and counting). But the process of sheltering the homeless during a pandemic has become unnecessarily politicized, and it’s hard to claim this isn’t a factor.

In the meantime, Fitzwater is trying to make the most of the uncertain amount of time he’s got left in his hotel room. Like many of the front-line workers serving in hotels like his, nobody has told him how long he’ll be here.

His leg is still killing him, but “nobody wants to hear me sniveling.”

Asked if there’s something he’d like people to know, his response is serious. He’s not laughing. Because it ain’t funny: “I am very thankful for this.”