While the city raises the specter of invasion of out-of-town homeless, one of its own dies on the street — denied a hotel room 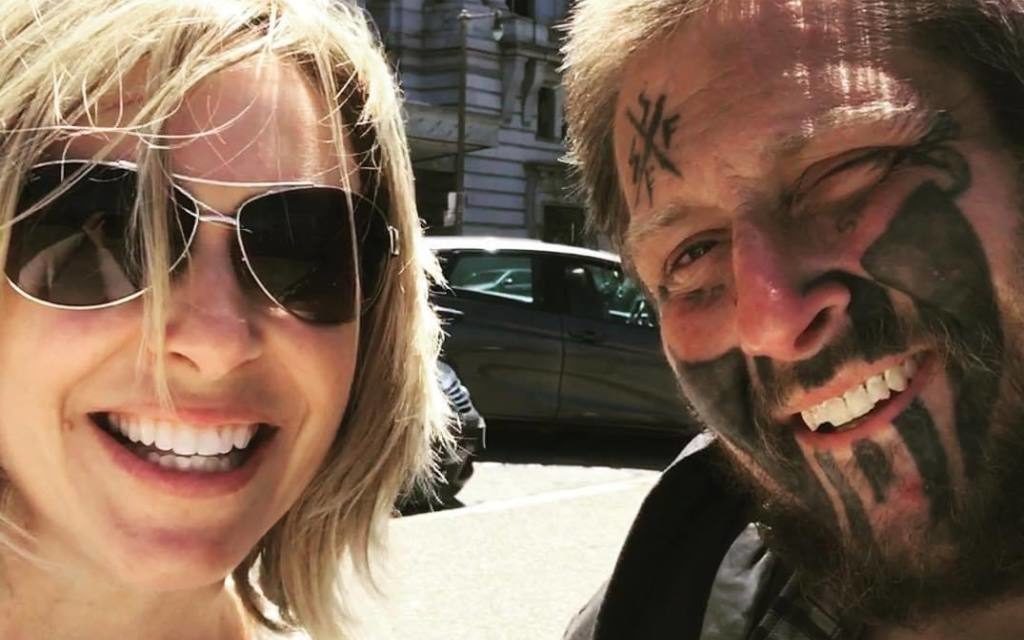 Ian Carrier in 2018, with his sister, April Sloane. Carrier had a habit of giving away his phone to people who needed it more — or getting it stolen — so his family usually only was able to talk to him when he was hospitalized.

When Ian Carrier departed this Earth, he left behind only two items: His wheelchair and his discharge papers from the hospital.

They were printed up almost exactly a week ago, at 3:20 p.m. on Monday, April 27. Mary Howe found the wheelchair, the papers, and Carrier on Hyde and Eddy one day later. He’d been dead for hours, and it was left to Howe to identify the body.

She was qualified; Howe had known Carrier for, perhaps, half his life. She’d known him since before outreach workers kept case notes for homeless clients on computers; her earliest set of surviving case notes says she’d spilled coffee all over his earlier set of case notes.

Carrier was 36. He was not a well man. Starting at age nine or 10, he began hearing voices nobody else could hear and seeing visions nobody else could see. He’d been diagnosed with schizophrenia as a teen. He dropped out of school and traveled the nation with other young people. He’d landed in San Francisco in the early 2000s. He was inside every so often, but more often not. He used drugs; heroin, his father said, “quelled the nightmares and the pain.” He grew sick. His legs were riddled with lesions and sores, and he mostly got around using a wheelchair over the past four years.

In December, things took a turn for the worse. He was hospitalized on Christmas Day with a fever and a horrid cough and ended up intubated and on a ventilator; his family told the New York Times they wonder if he was an early, undiagnosed COVID-19 patient.

His kidneys failed him. He was on heavy dialysis during a monthslong hospital stay. He was discharged onto the street and still tried to make it back to the for thrice-weekly dialysis sessions. This didn’t always happen. He was back in the hospital often.

On April 27, he was sent not to a hotel room for the city’s vulnerable populations but to the burgeoning tent encampment near the Asian Art Museum. “I was shocked he was getting discharged and I had assumed they’d gotten him one of the hotel rooms,” says Howe, the executive director of the Homeless Youth Alliance. “Ian said he didn’t know what I was talking about.”

More than most sickly homeless people, Carrier was a man with a cheering section; Howe says she phoned up and attempted to wrangle a hotel room on his behalf.

It’s hard to shelter in place when you have no shelter and have no place, and what to do — or not do — for  this city’s worst-off has been a matter of no small contention. The Board of Supervisors unanimously passed emergency legislation mandating the city obtain 8,250 hotel rooms by April 26, one day before Carrier’s discharge, and begin putting vulnerable homeless people into them. The mayor, as is her prerogative, blew off this legislation.

But none would ever be occupied by Ian Carrier. “I called the hotel coordination team,” said Howe, “and they said they had nothing available.”

One day later, he was dead on the street. 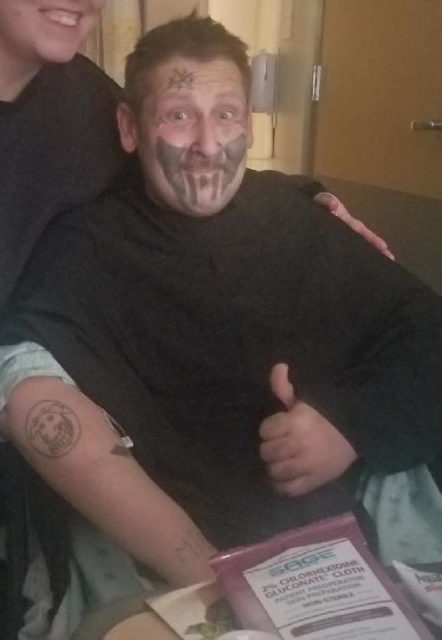 “I’m sorry,” says April Sloane, Carrier’s older sister, “but it’s completely nonsensical. During a shelter-in-place a man can just check out of the hospital with chronic  health conditions and be dropped off on the sidewalk somewhere? It makes me so angry.”

Vulnerable, sick people being denied hotel rooms and sent to the streets — or back to crowded single-room occupancy hotels — to fend for themselves and possibly sicken others is a problem. But it’s not the problem the city has pushed to the forefront of late.

Last week, Mayor London Breed claimed that homeless people were beating a path to this city to avail themselves of our largess, and warned them to stay out — a moment that felt uncomfortably like the police chief of Malibu urging Jeff Lebowski to stay out of his beach community.

Over the weekend, an article appeared in the Chronicle stating that San Francisco has become a “magnet” for homeless hotel-seekers who are “flocking” here.

The evidence for said claim was strikingly thin. “Field reports” from frontline homeless workers were alluded to but not disclosed, and the city’s fire chief said, essentially, to trust her on this. Two more anonymous sources said, essentially, to trust them on this. One, an EMT, said that homeless people are coming here, dialing 911, claiming to have COVID-19, and being packed off to the hospital — and, potentially, some manner of taxpayer-subsidized treatment or respite.

Such a 911 call is a documentable event. Your humble narrator has filed a public records request for any such transaction and will share the results when they come. 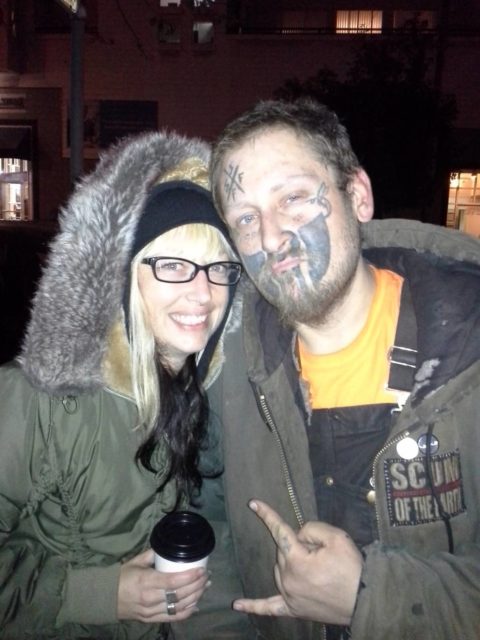 Mary Howe’s favorite photo of her with Ian Carrier.

Is San Francisco being overrun by out-of-town homeless interlopers here to avail themselves of our misbegotten generosity? Well, possibly. But no city entity or news article has come close to proving the charges the Chronicle blithely states in its headline. In fact, various city powers-that-be have been claiming that San Francisco would be overrun by out-of-town homeless interlopers for the better part of a generation, going back to the Care-Not-Cash era.

For such a frequently bandied-about claim, you’d think someone could’ve quantified it by now. But that hasn’t happened. In fact, insofar as any data has been quantified, it reveals the opposite: Per polling, it seems the vast majority of San Francisco homeless people — 70 percent as of 2019 — were living in San Francisco when they became homeless.

Before she was claiming that homeless people are traveling to San Francisco to eat our lunch in 2020, Breed in 2018 claimed that this would happen if we passed Prop. C. A report by the city economist calmly noted that his office “identified no research that found that expanded homelessness services or facilities increases homelessness.”

But that was 2018. Could this be happening in 2020? Again, possibly. But all that’s been presented so far is anecdotal evidence. And, considering that this has been a go-to trope for years and years, the burden of proof is on those making this claim to prove that, this time, it’s true and accurate.

In fact, your humble narrator spoke with half a dozen front-line homeless workers. And they did not feel this to be true or accurate.

“The Haight is always the place young people come to, but now it’s not the case,” says Howe. “I have not met one person who has come to town in the last two months.”

Adds Felanie Castro, a case manager at GLIDE, “They’re coming for hotel rooms? The folks who are already here hoping to get hotel rooms are not getting hotel rooms.”

“I have meals, water, masks, sanitizer, Narcan, hygiene supplies, and tents. I see 100 to 200 people a day. And I have not seen an influx of people. I have seen a redistribution of people who were already outside.”

Homeless front-line worker Shannon Ducharme, who was herself homeless in San Francisco a few years back, says she has, thus far, met one couple from Reno who came to this city in hopes of scoring a hotel room. And that’s it.

As for the Asian Art Museum encampment the fire chief claimed was 75 percent out-of-towners, “that’s completely untrue,” says Ducharme. “I have been working with all of the guys who are there for four or five years. Some of them I’ve known for 10 years, since before I’ve been working with them.”

Does that mean people aren’t heading to San Francisco to see what they can get? No. Again, that could be happening. But nobody has come close to proving it, beyond anecdotes. And, if it is happening, it’s news to the people on the street working hand-in-hand with our vulnerable homeless.

“I am in Bayview, Hunters Point, Potrero, Excelsior, SoMa, Sunnydale, the Mission. I am everywhere,” says Castro. “Every day.” 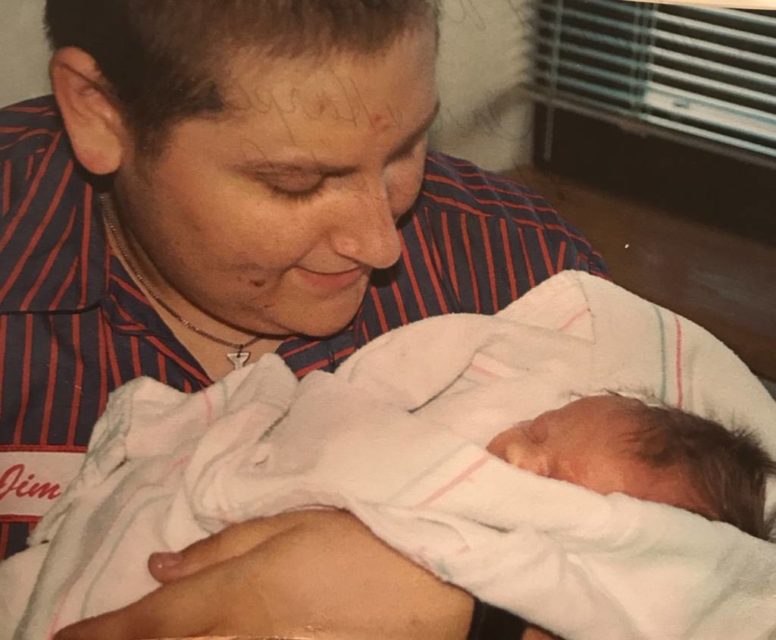 Ian Carrier meets his first nephew, not quite 20 years ago.

Ian Carrier was a sick man. He had intimidating facial tattoos. He perambulated in a wheelchair. He drank. He used drugs. He was exactly the person you didn’t make eye contact with as you walked through SoMa or the Mission.

So you didn’t see a man so generous he’d give away his own shoes to someone who needed them more. You didn’t talk to a witty, funny person who knew how to make his friends feel loved. You didn’t know that, after nearly dying in the hospital in December, Carrier finally admitted he was a man who needed help. Who needed rehab. Who, finally, admitted that things were bad but they could get better — and he wanted to get better.

But he couldn’t. No rehab site would take someone in such physically poor condition. First, he’d need to get into shape at a convalescent hospital before undergoing rehab — “prehab,” his friend Howe joked. After months of improvement in the hospital, it looked like he’d be able to get into Laguna Honda and strengthen himself.

But he didn’t. Somehow, Howe says, the paperwork didn’t come through. He was sent instead to a medical respite in SoMa, not far from his old life and old habits. “He didn’t last a day,” said Sloane.

Instead of getting better, Carrier got worse. He spent the next couple of months bouncing in and out of the hospital. Until, in the midst of a pandemic, he was discharged out onto the street, without a tent.

And he didn’t last a day.

“In my memory,” said Sloane, “he will forever be my baby brother.” 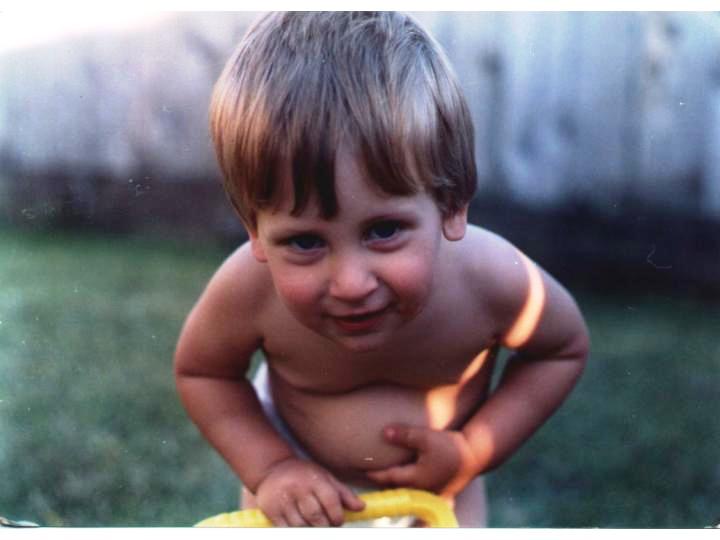 If you can, please support our reporting.