In the city’s biggest study to date, researchers test 4,204 people in the Mission District for COVID-19 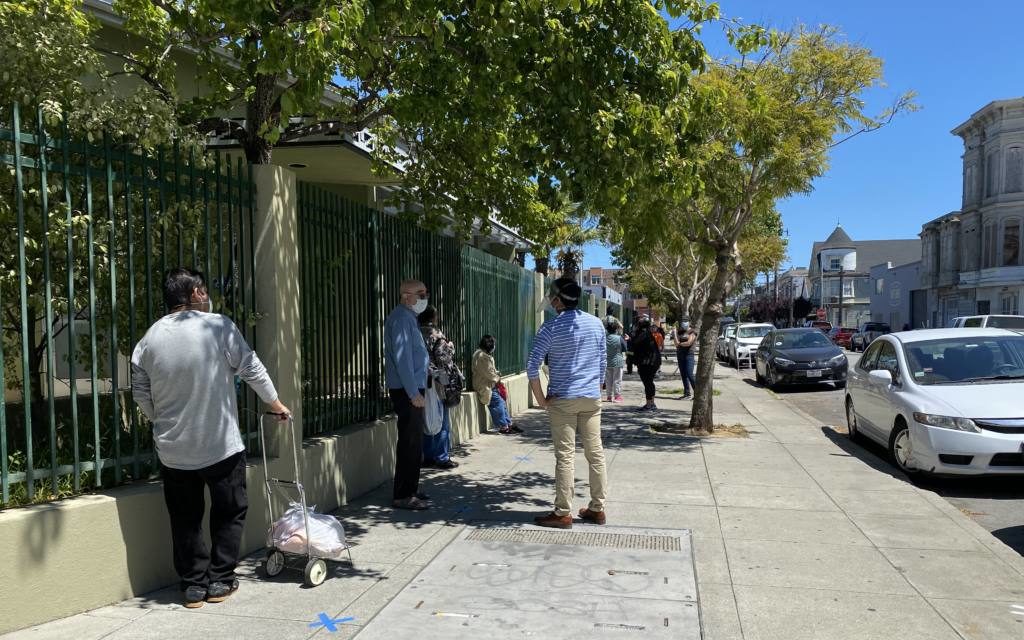 The line outside of Parque Niños Unidos extended around the block onto Folsom Street. Photo by Lydia Chávez

In the final day of testing on Tuesday, 1,701 people showed up for tests — the biggest one-day number over the four days. Some of the increase came by extending the area beyond the original census tract, 229.01, to include some surrounding blocks.

To put those numbers in perspective, San Francisco has tested 17,718 residents since the pandemic began, well under 1,000 a day. Although Dr. Susan Philip, with the San Francisco Department of Public Health, said last week that the city’s daily testing capacity is now 4,300, actual tests remain well below that number.

The Mission campaign was triggered by data that showed a disproportionate impact on the Latino community, which accounts for 15 percent of the city’s population, but 33 percent of the confirmed COVID-19 cases, according to the latest data.

Researchers are expected to announce some results from the study on Monday. 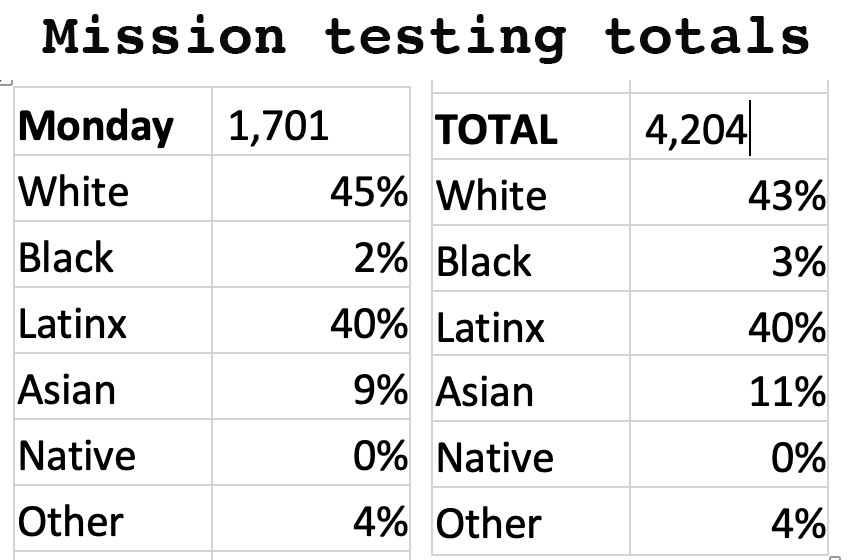 Preliminary figures indicate that researchers tested as many as 4,200 people over four days in the Mission District — the largest COVID-19 testing campaign in San Francisco since the pandemic began.

At the end of the day on Monday, the total tested stood at 2,508 — which means the testing team figured to have seen nearly 1,700 more patients today. This more than doubles the previous mark for San Franciscans tested in any single day.

“We’re all dead from exhaustion. Signing off,” wrote Diane Jones, a retired HIV nurse and the liaison with the UCSF researchers and the Latino Task Force. Jones e-mailed Mission Local the preliminary results.

On Tuesday researchers expanded the testing area several blocks beyond Census tract 229.01 to include 21st to Precita and Bryant to South Van Ness. Census 229.01 includes 23rd to Cesar Chavez and South Van Ness to Harrison.

“It has picked up,” said a volunteer at Flynn.

On Sunday and Monday at 1:30 in the afternoon there were no lines, and residents could go to either site and get tested almost immediately. Today the waits were long, but no one seemed to complain.

The scene at Garfield Park, which had been the busiest over the last two days, was somewhat calmer Tuesday afternoon, but Dr. Gabriel Chamie of UCSF, who is helping to lead the study, said it had been busier earlier in the day.

Researchers tested another 781 residents on Monday,  bringing the total of tested residents to 2,508 at the end of Monday.

Dr. Carina Marquez, the site leader at Parque Niños Unidos as well as an assistant professor of medicine and associate director of education in the Division of HIV at UCSF, said they were seeing more drop-ins on Monday.

“It means we’re getting a lot of people who have less access to the internet or less familiarity with the internet,” she said. “So they’re doing registration on-site and that is a great thing.”

She wanted to encourage residents to do just that.

If you want to enroll online, go here, but no appointments are needed and the tests are free and not uncomfortable.

I got tested on Saturday expecting the swab to be unpleasant, but it was akin to rubbing the side of one’s nose from the inside – not something you want to do often, but pain-free.  The antibody test involves a pinprick that is over before you know it has happened.

The researchers have expanded the test area to include 21st to Precita and South Van Ness to Bryant streets.

Testing is at Flynn Elementary School, Parque Niños Unidos, and Garfield Park. The latter has been the busiest site, but the others hardly have lines. 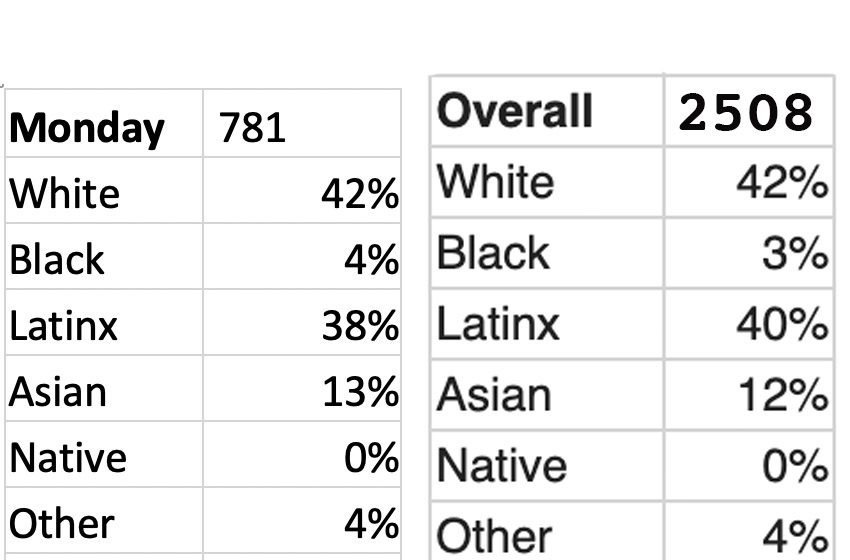 Totals from Monday, left, and over the first three days, right. Source: UCSF.

By the end of the weekend, researchers had tested 1,650 residents in Census tract 229.01 in the southeast Mission, a tract targeted because of its density and its majority-Latinx population.

The tests are free and patients do not have to show symptoms.

Researchers said that today and Tuesday they will focus on families with children, day laborers, and the unhoused. The effort has involved some 140 volunteers a day and represents a doubling of tests compared to what the city has managed so far.

An outreach effort to Latino families on Sunday improved the intake with Latinos, who comprised 42 percent of those tested on Sunday. Whites, accounted for 38 percent, blacks 3 percent, and Asians 13 percent.

At the end of the day Saturday, UCSF doctors, nurses, and a large cadre of community volunteers had tested some 950 residents at four locations in the Mission, according to Diane Jones, a retired HIV nurse and volunteer for the effort. Until now, the largest number of residents tested on one day was 577, on April 23.

Jones said that some sites got off to a slower start because of logistical and infrastructure issues, such as porta-potties. The head of Department of Public Works jumped in to resolve that issue, and other city officials, she said, were exceedingly helpful.

Jones said there were fewer Latinx families among the residents tested today, and to remedy this the volunteers have already planned a door-to-door effort for Sunday to increase Latinx participation. By 2:30 p.m., the lines at most of the sites were gone and residents who had not registered could show up and be tested immediately.

Again, Jones stressed, the campaign is testing anyone who lives or works in the area between South Van Ness, Harrison and 23rd and Cesar Chavez streets. The tests are free. Those who live and work in the area include day laborers who may not be employed at this time, or homeless residents who keep to the area.

If a significant number of tests remain on Monday night, the researchers will open up the testing area within the Mission District. Interested residents can check the website Monday night, but Mission Local will also report whether the campaign opens beyond the one designated census tract.

Long lines formed at least two of the four Mission District test sites this morning, but the tests proceeded calmly, if somewhat slowly, as the city embarks on the first of what promises to be many testing campaigns — a key to reopening the city.

The four-day campaign to test some 5,700 residents in one Mission Census tract is the first of its kind, but doctors hope it will be repeated here as well as other places in the city, according to Dr. Diane Havlir, the lead investigator of the UCSF study and chief of the division of HIV, Infectious Diseases and Global Medicine at UCSF.  Havlir and others briefed the press at 11 a.m. this morning.

Havlir said researchers hope to do “repeat testing as the shelter in place restrictions are peeled away.” She added that she and others were advocating for wider testing throughout the city.

Dr. Kirsten Bibbins-Domingo, the vice dean for the Population and Health Equity and Chair of Epidemiology and Biostatistics at UCSF,  said they would especially like to see testing in communities disproportionately affected including Latinxs, blacks, and unsheltered and vulnerable populations.

Earlier today, Kimberly, a local resident, reported from her line at Garfield Park. “We’re still in the same spot of the line and we were scheduled at 9:30, but I don’t see people complaining,” she said after 10 a.m. Instead, she said, people are talking to one another and “staring into the park, seeing what the volunteers are doing.”

A long line also formed outside of Parque Niños Unidos by 10 a.m., but again, those who waited appeared unconcerned about the time.

Residents are taking two tests – one to see if they have COVID-19 and a second to see if they have antibodies indicating they have already had — and survived — COVID-19. While the latter does not necessarily indicate immunity, it could be an important marker, and the information also tells researchers how many people in the community have already been exposed to the virus. The second test, Havlir said, was made by Abbott Laboratories. She said she was confident about its efficacy.

Although Mission Local heard from one participant that a resident without an appointment at Garfield was turned away today and told to register at home, the researchers said that was an anomaly.  They stressed that if a resident cannot register online, they can register at one of the four sites and will be given an appointment. Online registration is here.

The press briefing was a call for participation. Jon Jacobo, from the Latino Task Force for Covid-19, estimated that well over 2,000 people have already registered. Researchers would like to see more than 5,000 residents take the tests.

Another attendee at Garfield Park said that as they reached the front, they were screened for symptoms and asked whether they had registered for the test.

Once tested, the resident was told that they would get “Results in 72 hours — if you are positive, they contact you. If not, they provided a web link and assured results were confidential and the test was free.”

At the press briefing today, researchers described how the idea for the test came about. Doctors at General Hospital were seeing an unusual number of COVID-19 patients who were Latinx — some 70 to 80 percent, when Latinxs generally make up 30 percent of the patients at the hospital.

They contracted District Supervisor Hillary Ronen, who quickly got on board and enlisted the help of community volunteers and the Latino Task Force for COVID-19. Within days, community volunteers were on the streets, going door to door, to encourage participation and answer questions.

Within 48 hours, the doctors said, they had a plan. “It was like flying a plane and building it at the same time,” said Jacobo.

We’re able to do this because of the generosity of our readers — thank you. If you come here regularly and haven’t yet chipped in — there’s no time like now. 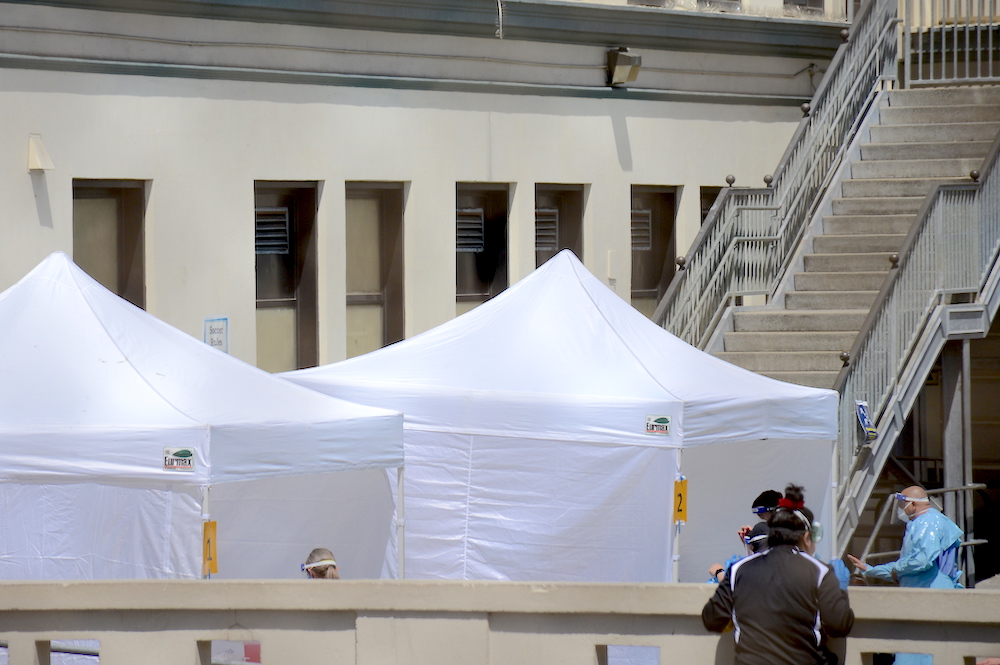 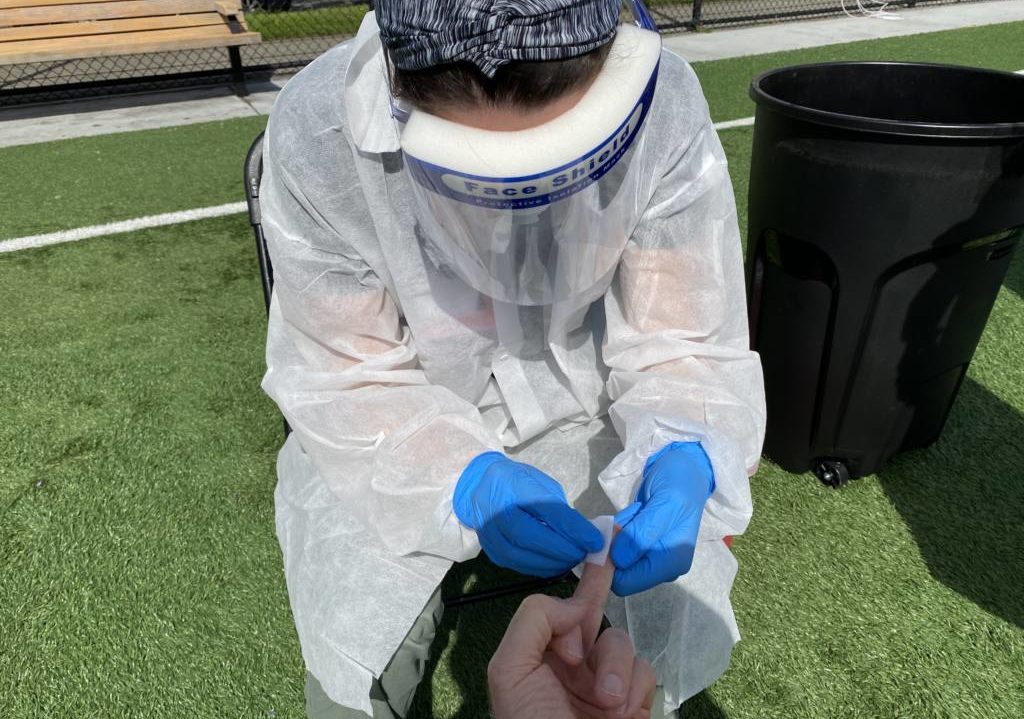 A pinprick and the serology test is a wrap. Photo by George Lipp who is also being tested. 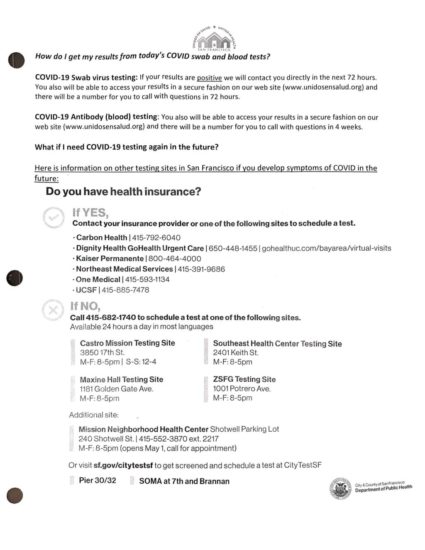 Page 1 of what participants in today’s testing were given. 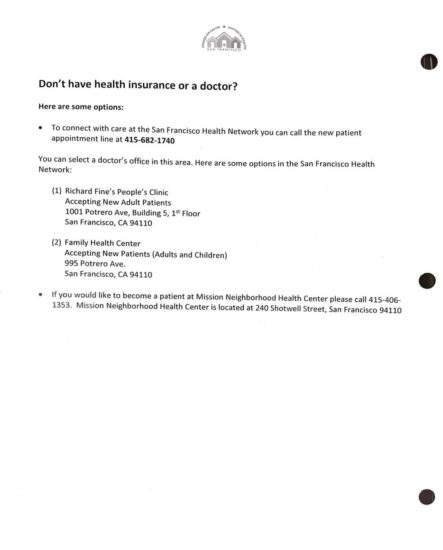 Page 2 of what participants were given as they left the testing area.