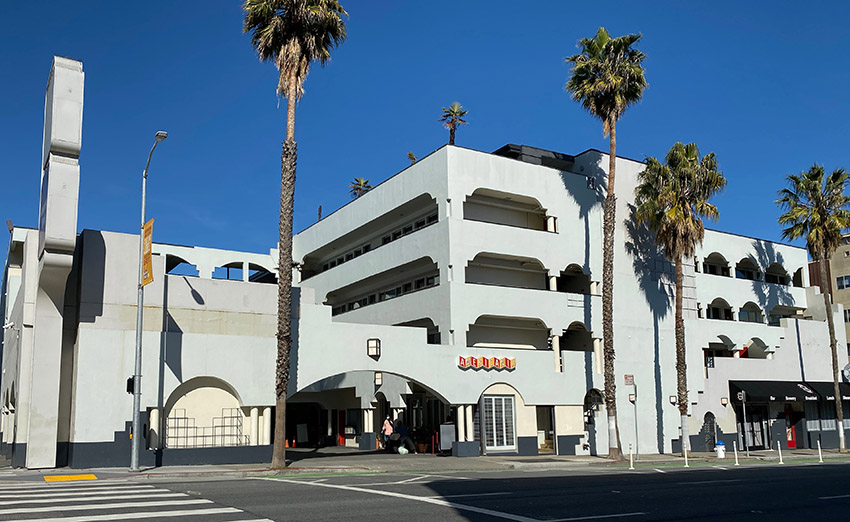 The Americania Hotel at 121 7th St. is one of the many hotels the city has under contract. Trip Advisor rates vary from $75 a night to more than $300 a night. Tuesday, April 14, 2020 Photo by Lydia Chávez

The Board of Supervisors this afternoon unanimously passed emergency legislation that requires the city to acquire 8,250 hotel rooms by April 26 for unsheltered residents, first responders and individuals leaving hospitals with no suitable place to quarantine.

Already, the city has said it is working to get 7,000 hotel rooms under contract. Paul Monge, legislative aide to Supervisor Hillary Ronen, called that earlier commitment “the good news.”

The city had already put together staff and a plan to reach that 7,000 room tally last week, he said. “The difference here is really 1,200 rooms, so the bulk of what the city is committing to today is reflecting on these numbers.”

But District 6 Supervisor Matt Haney said today’s legislation was necessary because the city’s plans are “not clear enough [and] not fast enough.”

“We have tried to do this through partnership but legislation is absolutely required,” Haney said.

The legislation was introduced and passed quickly following the aftermath of an outbreak at MSC South shelter, where more than 100 people have already contracted COVID-19 — which, according to Haney, is now the biggest outbreak in any shelter across the country.

District 9 Supervisor Hillary Ronen added, “we have turned our city upside down fiscally. It was the right thing to do, because saving lives matters more.” But “we have simply not done that for the unhoused population. We have not gone all out.”

Of the 8,250 hotel and motel rooms, 7,000 rooms will be used to shelter unhoused individuals, 750 rooms will be set aside for first responders, and 500 rooms for other individuals needing to quarantine after getting discharged from hospitals.

At present, the city has 2,082 hotel rooms under contract, according to Trent Rhorer, the director of the San Francisco Human Services Agency. Of those, 880 rooms at two sites have been set aside for first responders.

The remaining 1,202 rooms already in the city’s grasp are for vulnerable populations, including residents from shelters that are undergoing thinning, homeless people who are 60 years old and have underlying health conditions, and those who have been discharged from hospitals and have nowhere to go. Of the 1,202 rooms, Rhorer said at a Monday briefing, 751 had been filled. Rhorer said Wednesday that the city was working to get 7,000 under contract.

According to Tuesday’s legislation, it would cost $58.6 million to acquire 8,250 rooms for one month, including security, food and personal care and room cleaning expenses. An additional $1.67 million per month might be needed to pay for onsite management staff at the hotels and motels.

Supervisors emphasized that the Federal Emergency Management Agency and the California Office of Emergency Services could reimburse the city for up to 93.75 percent of emergency costs that it will incur in implementing the legislation.

“We have approximately 5,600 people that are living on the streets and in shelters that couldn’t care for themselves,” said Ronen.

In San Francisco, however, whether eight or even all 11 supervisors vote for legislation, it remains the mayor’s purview to not spend the money that would enable it.

What’s more, questions remain about the operational feasibility of the emergency hotel legislation, especially on an expedited timeline. Even if the city repurposes employees normally working in a variety of departments into staffing these hotels, any number of them may decline to do so and go on leave (city sources noted that a similar inability to field enough drivers was a large factor in Muni service being cut to a bare minimum, and there are fears that COVID hotel staffing could suffer a similar fate).

Multiple contracts involving multiple departments would need to be finalized to enable this legislation— also a bottleneck.

“Passing something at the board,” one City Hall source tells us, “does not, in and of itself, constitute a plan.”

So, today’s legislation may not be enacted on a timetable that would please its backers.

“The fact that we haven’t had the urgency,” said Ronen during today’s meeting. That the city hadn’t been hustling to place vulnerable homeless people into hotels for the past month, she continued, was wrong —  “wrong from every which way you look at it.”

Joe Eskenazi contributed to this report.