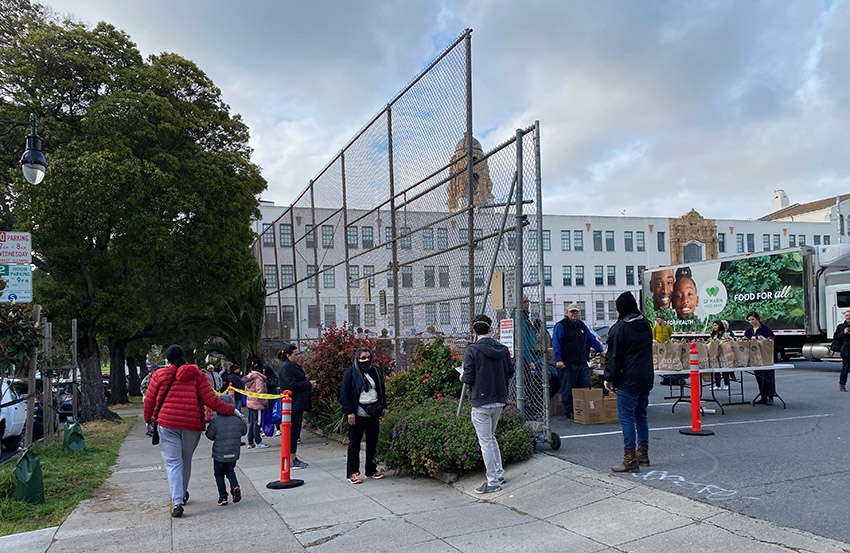 The San Francisco-Marin Food Bank’s truck arrived at Mission High School Thursday morning, and so did a line of residents anxious to pick up a 25- to 30-pound bag of dietary staples, fresh vegetables and milk.  The pantry, set up in the parking lot, will be open until 1 p.m.

“We’re trying to get to a number of sites in San Francisco,” said Sean Brooks, the chief programs officer, who was on site.

Food pantries at school sites started to gear up this week, with openings at the James Denman Middle School on Wednesday in the Outer Mission and today at Mission High, Bessie Carmichael Elementary School in the South of Market neighborhood, and Francisco Middle School in North Beach. Lincoln High School in the Sunset District will open tomorrow.

Plans are being made to open at other schools as well.

“We’re getting a lot of calls from people who are desperate,” said Gunilla Bergensten, director of marketing and communications at SF Marin Book Bank, who was at Mission High School on Thursday. Earlier this week, she said, the food bank gave out 250 bags of food at Denman Middle School.

While the line for the food pantry stretched for a quarter of the block, the San Francisco Unified School District’s free meal handout, which started Tuesday at Mission High School, has drawn fewer parents than anticipated. Workers for the school district gave out 60 meals at Mission High on Thursday — a high since the program started on Tuesday when workers expected to give out 300 meals, but ended up handing out fewer than 60.

At Cesar Chavez Elementary School, where the district began handing out meals this morning, they distributed 35 meals by 9:20 a.m. and would be there until 10:30 a.m.

Marina Aguilar, 29, was one of those at Cesar Chavez. She works in the kitchen at Al’s Place, which right now only offers takeout.

Her household has seven people: four children and three adults. Her brother, who is a janitor, is also out of work. “We don’t know what’s going to happen or for how long we will go on like this,” she said. “Imagine, no work, no income … ”

Brooks and Bergensten were well aware of the food insecurity that residents like Aguilar are feeling.

They encouraged families to go to their website to check on pantries that are open but warned that it would not be updated until next week. The list of schools will be under the tab, weekly groceries.

Up until the schools closed, the food bank distributed food once a week at its in-school pantries. Now, those pantries are also closed so they are re-opening at certain schools and will expand the list from the four schools this week to more next week.

Many of the food bank’s community pantries still serve mostly registered clients, but the food bank is encouraging them to open up registration and it is sending more supplies so that pantries will be able to give out food to unregistered residents. “We asked our pantry partners to hand out food to everyone who shows up,” Bergensten said.

Another glitch in their normal distribution at community food pantries is their partners that are also health clinics, such as the Silver Avenue Health Center, have stopped distribution.

Brooks, from the SF-Marin Food bank, said the clinics have closed their pantries because of the threat of contamination.

“They have to focus their efforts on the medical,” said Brooks. The food bank is trying to accommodate those families elsewhere.

While the food bank’s website lists places to pick up emergency food boxes, those supplies are acutely limited and not meant as a response to the current crisis. “People in need because of issues related to COVID-19 should be referred to pantries since this situation is ongoing,” Bergensten said.

At La Raza Community Resource Center, Luis Vasquez Gomez, a family advocate at the center, emphasized the center is only open to registered members who have appointments with them — and they are not registering new families.

One issue for the SF-Marin Food Bank and its community partners is the lack of volunteers to help with distribution. The food bank urged residents to volunteer to help at the handouts by going to their site.

Brooks did not see problems with their basic supply chain for the food handed out, but it will take some time to bring on more volunteers and open at additional sites.

“We have been reassured that the food supply is secure,” he said.

And, calm was the vibe at Mission High School where volunteers reminded those in line to practice social distancing and allowed only one family at a time to pick up their bag.

At the Richmond District Neighborhood Center, Yves Xavier, neighborhood services program manager, said that they usually serve 800 people every week in their food pantry and close to 200 grocery home deliveries. “Those are still operating,” he said.

Bergensten said that their advice is for people to go on their website food locator or call 211 before going to any pantry to make sure they can get food.

San Francisco residents may also text their zip code to 211 to get information about which food pantries are available in their areas.

Local journalism is critical. Please continue to help. We’re trying to get useful information up as quickly as possible. 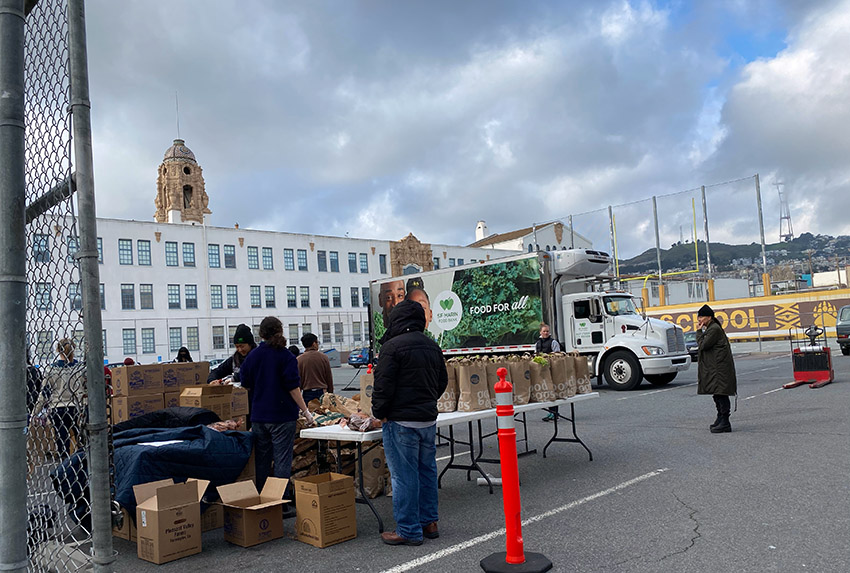 It was orderly and calm at Mission High School where the SF-Marin Food Bank had set up. Photo by Lydia Chávez. 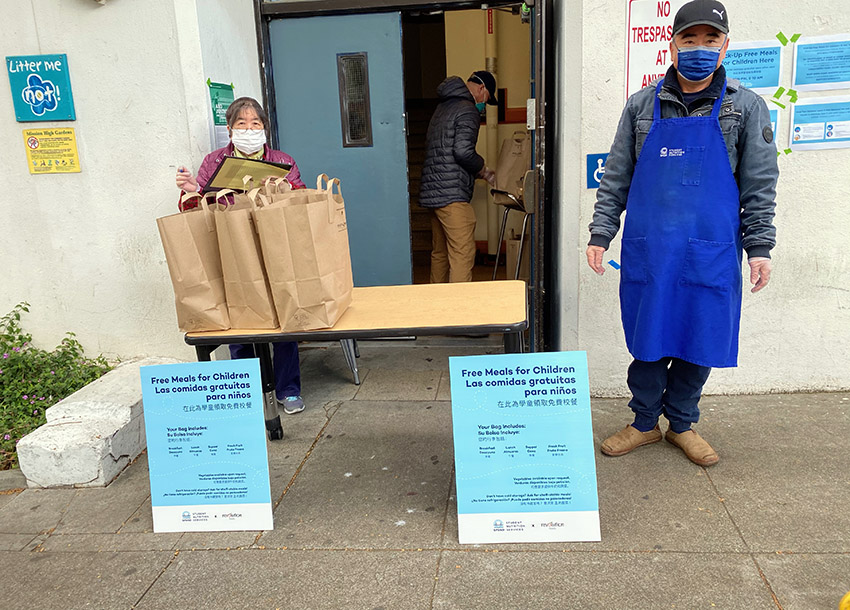 At the SFUSD’s free meal handouts, the demand has been less than expected. Photo by Lydia Chávez. 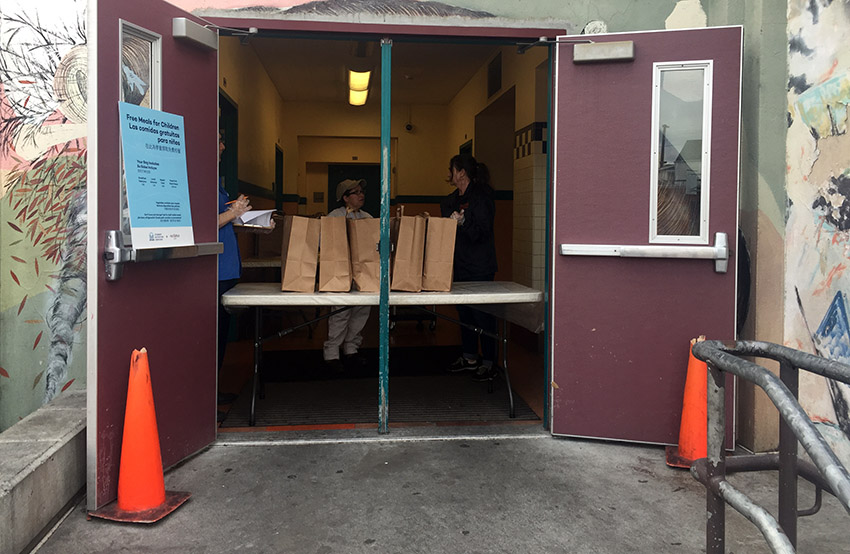